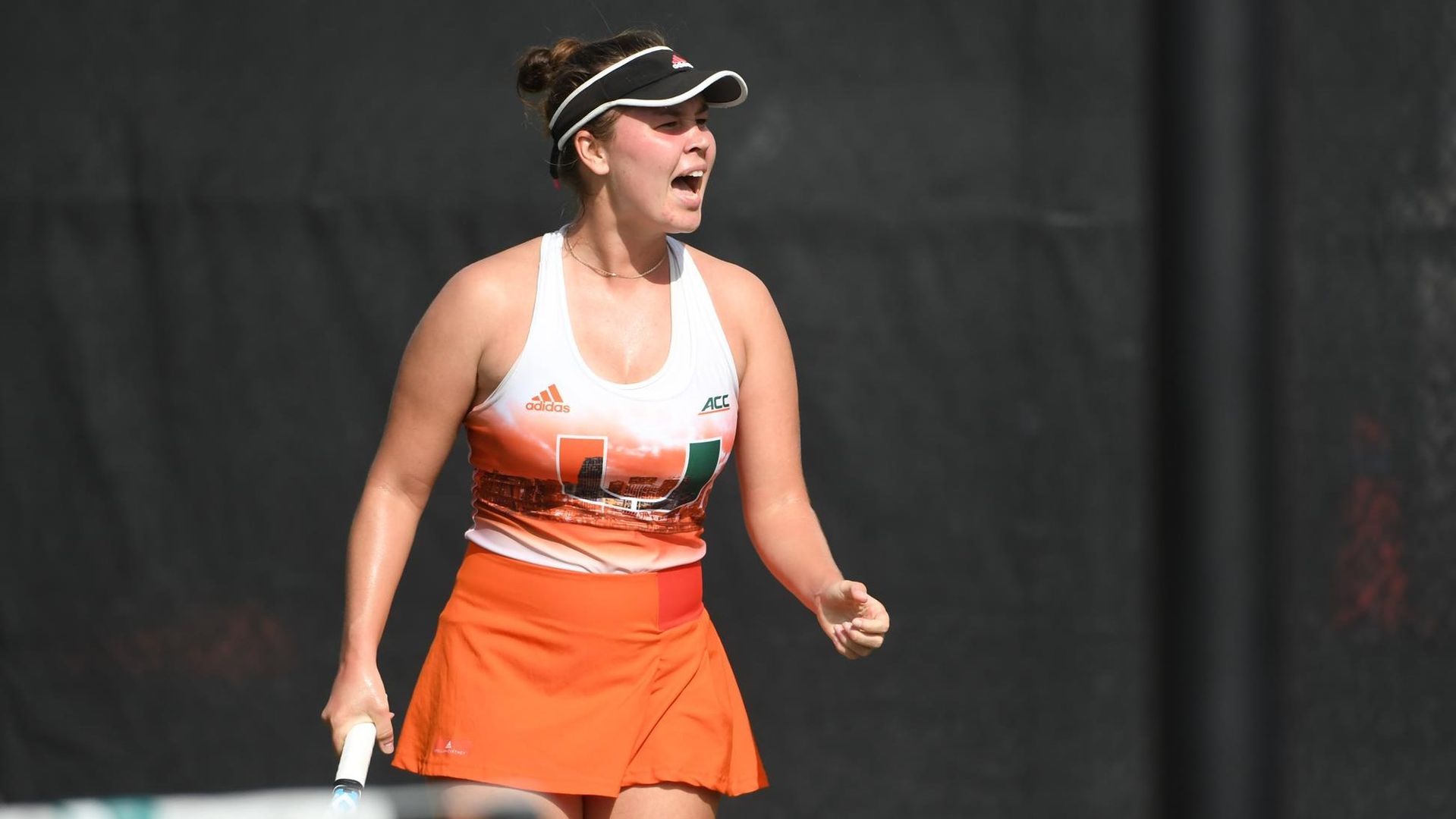 SYRACUSE, N.Y. – The University of Miami women’s tennis team posted a 5-2 triumph Sunday afternoon over No. 30 Syracuse at Drumlins Country Club in its final road match of the regular season.

“We beat a tough Syracuse team today in conditions that were very difficult. The level of tennis was high, but most importantly, we didn’t get rattled mentally,” Miami head coach Paige Yaroshuk-Tews said. “This is probably the proudest I’ve been of this team all year. We stayed together as a unit, we brought some new points to the table and we simply competed hard.”

Junior Yuna Ito and senior Ana Madcur countered for Miami with a 6-2 victory over Dina Hegab and Guzal Yuspova to tie the doubles ledger.

Junior Estela Perez-Somarriba and sophomore Ulyana Shirokova sealed the Hurricanes’ doubles comeback with a 6-4 decision against Sofya Golubovskaya and Sofya Treshcheva, staving off two game points for a break to clinch it.

Achong logged the first win in singles play with a 6-2, 6-4 triumph over Golubovskaya after taking each of the last four games of the match.

Shirokova moved Miami within a point of victory by earning an identical 6-2, 6-4 result in her matchup with Libi Mesh. Hegab then got the Orange on the board by picking up a 6-1, 6-4 triumph against Marzal.

In a top-20 showdown, second-ranked Perez-Somarriba clinched Miami’s win with a narrow victory against No. 20 Knutson. Despite losing five deciding points in the first set, she won the opener in a tiebreaker.

Perez-Somarriba then rallied from 3-5 and 5-6 deficits in the second set to force another tiebreaker. Knutson staved off six match points before the reigning ACC Player of the Year wrapped up a 7-6 (7-2), 7-6 (9-7) win to clinch Miami’s victory and record her fifth top-30 decision this spring.

Shortly thereafter, Roldan registered the Hurricanes’ fifth and final point of the day in a tight three-set match with Tritou, posting a 7-5, 4-6, 7-5 result.

With the win, Miami improved to 11-1 all-time against Syracuse. It has held the Orange to under three points in all 11 of its victories in the series.

“We have definitely gone through some growing pains,” Yaroshuk-Tews said, “but I believe our best tennis is in front of us.”

Up next for the Hurricanes is a matchup with Louisville Thursday at 1 p.m. at the Neil Schiff Tennis Center.