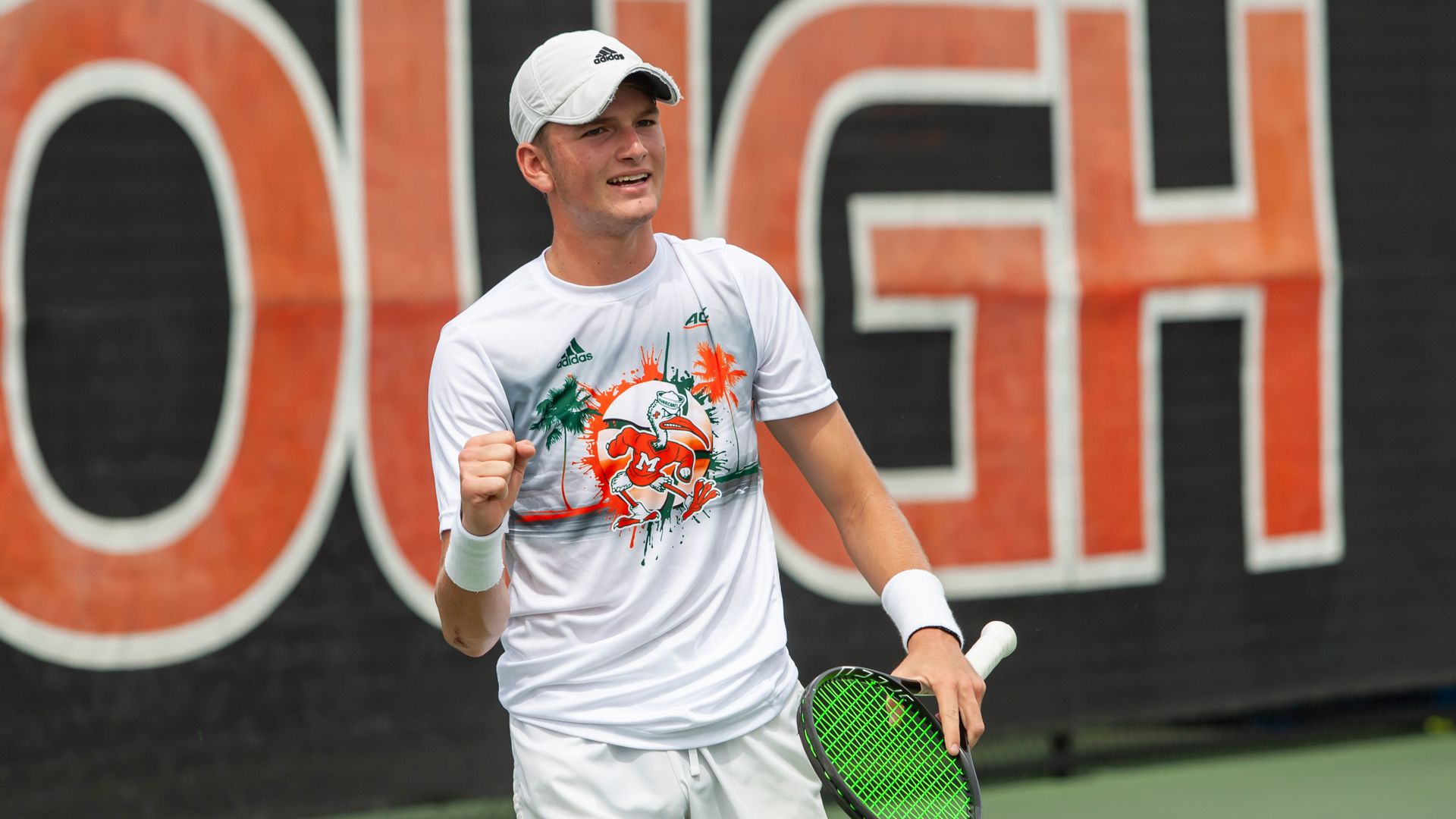 CORAL GABLES, Fla. – Trailing 3-1 in the match, the University of Miami men’s tennis team completed the comeback against No. 43 Virginia Tech, 4-3, Friday afternoon at the Neil Schiff Tennis Center and improved to 11-0 at home this season.

“That was a tough, tough win,” Miami head coach Aljosa Piric said. “That wasn’t necessarily the prettiest match and we didn’t necessarily play our best, but we found a way to win and that is what is important.”

No. 24 Miami’s (16-6, 7-2 ACC) freshmen tandem of Franco Aubone and Francisco Bastias quickly took care of business on court 3 against Carlo Donato and Alex Ribeiro. The duo collected their first clean sweep as collegiate partners, improving to 12-1 this spring.

Trailing 1-3 on court 1, sophomores Tatsuki Shimamoto and Adria Soriano Barrera bounced back and took a 4-3 lead. However, Henrik Korsgaard and Ryan Kros claimed the final three games to win the match, 6-4.

In the deciding doubles match, redshirt junior Dane Dunlap and junior Stephen Madonia won three straight games to take a 5-4 advantage before Jason Kros and Brandon Perez won back-to-back games of their own to serve holding a 6-5 lead.

Following a great return by Dunlap, the UM upperclassmen forced a third-set tiebreaker, in which Miami quickly jumped out to an early 5-1 lead. However, Kros and Perez claimed the final six points to seal the doubles point, 7-6 (7-5).

“In doubles we were flat, we just didn’t have the energy that is necessary to compete consistently at this level,” Piric said. “We lost the doubles point and in singles we didn’t really show up in two spots. Although four guys did step up and they competed well.”

Competing on court 3, Dunlap got Miami on the board with a dominating performance against Donato, as the redshirt junior cruised to a 6-1, 6-2 victory.

Looking to keep the match alive, sophomore Bojan Jankulovski, ranked No. 91 on the Oracle/ITA singles list, won the final five games of the opening set to take it 6-3. In the second, Brandon Perez again raced to an early lead, holding a 4-3 advantage.

In similar fashion to the first, the Skopje, Macedonia native again won the final three games to claim the match, 6-3, 6-4 and pull Miami within a point.

“Dane played a really good match and put us up on the board first,” Piric said. “Boki [individually] played a much, much better match and he had key moments where he was back to himself. Boki is so important to this team and this kind of match can act as a catalyst for him to end the season strong.

“And then [William Grattan-Smith] at No. 6 [singles], he just makes people play,” Piric continued. “He competes really well for us and he was able to tie the match at three, where it came down to Franco.”

After taking the opening set 6-3, Grattan-Smith found himself trailing 4-5 in the second set. Collecting a break point to tie it at 5-5, the sophomore pulled away with a 6-3, 7-5 triumph, as all eyes turned to court 5 with the score even at three.

In the lone singles match to enter a third set, Aubone claimed the opening set against Evan Fragistas, 7-5, before a second set comeback came up short, 4-6.

After both players shared break points through six games, Fragistas took a 4-3 advantage on his serve. Aubone bounced back to even the match at 4-4, before taking his fourth break point of the set to hold a 5-4 lead. The San Juan, Argentina native then closed out the match on his serve, 7-5, 4-6, 6-4, as Miami secured the team victory, 4-3.

“To be honest with you, I have said this before, this team has had different players step up in different moments all season and this was Franco’s moment,” Piric said. “He battled both his nerves and the moment, and he really stepped up and played very aggressive in the final three games to win. He played to win and I am really proud of him for doing that.

“Overall, every win is a good win, and we will take it, but we have to improve,” Piric said. “We have one of the best teams in the country coming here on Sunday and we have to play better,”