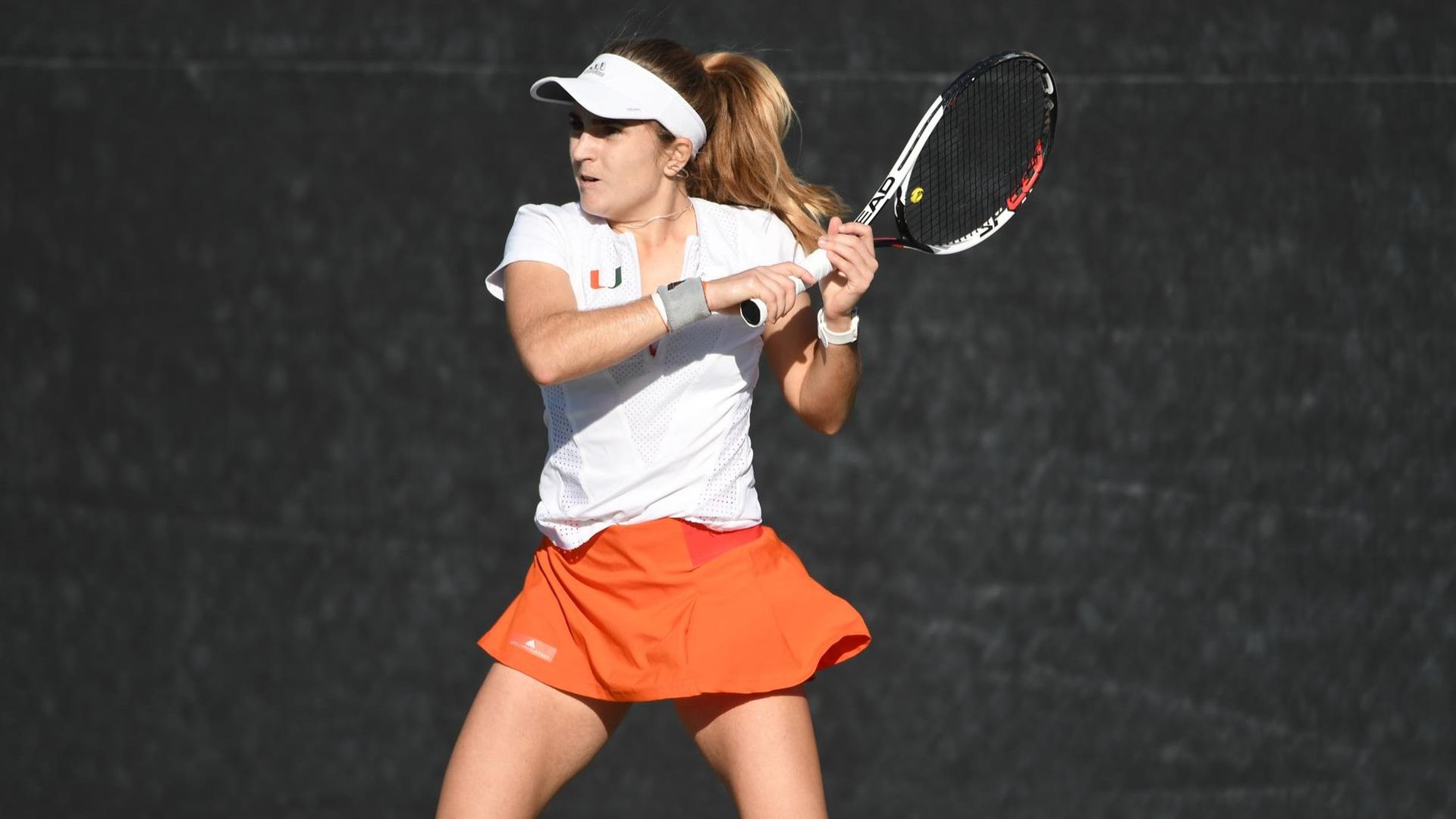 CHAPEL HILL, N.C. – For the second time this season, the University of Miami women’s tennis team came up on the short end of a 4-3 result against a top-three foe.

This time, No. 25 Miami (11-5, 4-4 ACC) fell on the road to top-ranked North Carolina Sunday at the Cone-Kenfield Tennis Center.

“We played a heck of a match today, firing on all cylinders at every position except one. This is how we are capable of competing each time out,” Miami head coach Paige Yaroshuk-Tews said. “Youth is not an excuse for being undisciplined. Our expectations for this team are high and it’s time they meet our coaching mentality. We have the ability to end this season very strong if we can find today’s tennis and energy each time out.”

Perez-Somarriba and sophomore Ulyana Shirokova evened the tally with a 6-2 decision against Makenna Jones and Alle Sanford, improving to 9-1 as a pair this spring.

Moments later, however, the eighth-ranked pair of Jessie Aney and Alexa Graham closed out a 6-3 victory over Miami’s No. 34-ranked duo of freshman Daevenia Achong and senior Daniella Roldan, putting the Tar Heels in front.

Marzal recorded the Hurricanes’ first point of the day with an impressive 6-0, 6-4 showing against Aney, a former top-20 player in the singles rankings.

Senior Ana Madcur countered by slicing Miami’s deficit in half with her first ACC win of the season, a 6-2, 6-2 result against Chloe Ouellet-Pizer.

Achong, down a set, nearly kept Miami’s hopes alive with a stellar effort versus third-ranked Graham. The Geleen, Netherlands, native took 5-4 and 6-5 second-set leads, but eventually fell in a tiebreaker by the slimmest of margins and dropped the match, 4-6, 6-7 (5-7), as North Carolina sealed the win.

Action concluded with a top-five showdown between second-ranked Perez-Somarriba and fifth-ranked Jones. After Perez-Somarriba won the first set, she rallied from a 4-5 deficit to force a second-set tiebreaker, which she took to register a 6-3, 7-6 (7-3) decision.

“Estela hit a milestone today that was inevitable with her level of talent and maturity,” Yaroshuk-Tews said. “I couldn’t be prouder of what she is doing.”

With the win, Perez-Somarriba became the 10th player in program history to reach triple-digit singles triumphs, including the seventh in Yaroshuk-Tews’ 18 seasons as the helm.