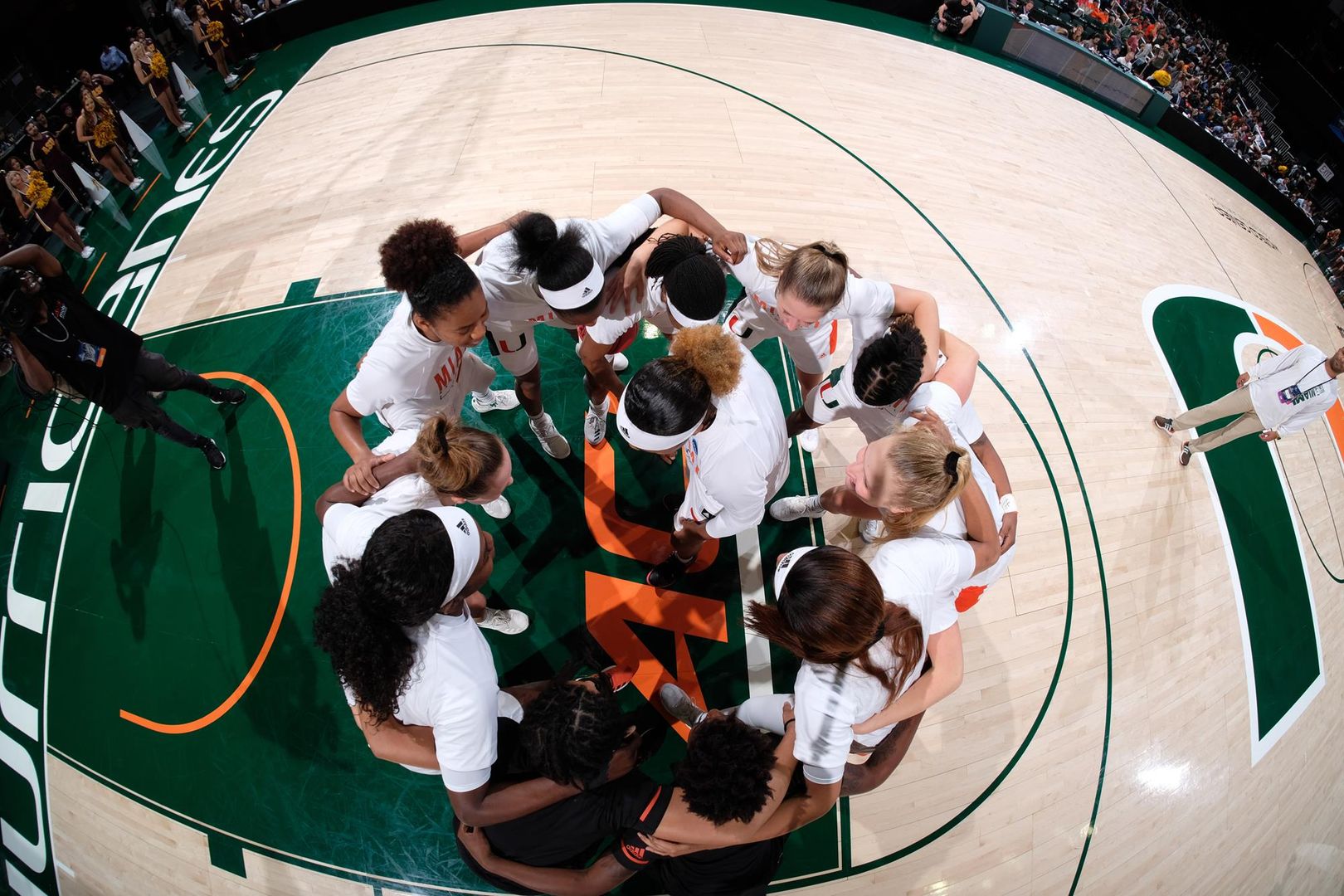 CORAL GABLES, Fla. – The University of Miami women’s basketball team’s stellar 2018-19 season came to end Sunday evening, as the fourth-seeded Hurricanes fell to fifth-seeded Arizona State, 57-55, in the second round of the NCAA Tournament.

No. 19/15 Miami (25-9, 12-4 ACC) got a career-high 22 rebounds from redshirt junior forward Beatrice Mompremier, tied for the third-most in program history and the school record in NCAA Tournament play, but it was not enough at the Watsco Center.

“I thought it was just a great basketball game with a whole bunch of lead changes. Seems like about half the game, one team was leading, and half, the other one was leading and it went back and forth,” Miami head coach Katie Meier said. “. . . I thought that was one great team that won and one great team that lost. Heck of a matchup to go to the Sweet 16 and that’s what the NCAA [Tournament] is all about.”

The Hurricanes flipped the script in the second session, holding Arizona State to a 3-of-17 (17.6 percent) mark and finishing 7-of-13 (53.8 percent) offensively. Miami allowed just eight points in the frame and took a two-point lead, 28-26, into the intermission.

Sophomore guard Mykea Gray scored all 13 of her points in the first half, while Mompremier notched 15 of her rebounds before the break.

Miami scored the first six points of the second half to take a game-high eight-point lead, but the Sun Devils came right back with six straight points of their own. The Hurricanes outscored them by three the rest of the session and held a 43-38 lead entering the final quarter.

Arizona State used an 8-2 run in the fourth period to take a 51-49 advantage with 4:56 remaining. The Hurricanes evened the score twice, but could not pull back in front.

After a Miami turnover, two free throws by junior guard Robbi Ryan with five seconds left put the Sun Devils ahead for good.

The Hurricanes got the ball in the closing seconds to senior forward/center Emese Hof, who ended her career with a program record 54.9 field goal percentage, but her shot rolled around the rim and out.

“It comes down to three plays at the end there—we made one mistake,” Meier said. “The rest, everything else that went on in that fourth quarter, I thought we were super. Super execution.”

Redshirt junior guard Laura Cornelius paced Miami with 15 points on 7-of-12 shooting, one off her season high in makes.

With her 22 rebounds, Mompremier tied for the sixth-most by any player in the history of the NCAA Tournament. The Miami native is the third player in program history with multiple 20-board showings.

Mompremier ended the season with 401 rebounds, becoming the second player in program history to surpass 400, along with Sylvia Wilson, who tallied 449 in 1980-81. Her 12.2 average broke Wilson’s 11.8 mark that stood as the school record for 38 years.

Junior forward Jamie Ruden was the lone Sun Devil to register double-figure points, finishing with 10, while three others posted nine.

“They were as tough as any team we’ve played all year,” Meier said of the Sun Devils. “They were committed to their game plan. They didn’t change it defensively.”

Sunday marked the first time Miami lost at home to a ranked team since Feb. 11, 2018 against No. 12 Florida State. It was also the first time the Hurricanes conceded fewer than 60 points in a defeat since March 4, 2017 against No. 13/11 Duke in the ACC Tournament semifinals in Conway, S.C.

The Hurricanes’ 25 wins on this season tied for the fourth-most in program history and their 17 home triumphs matched their second-highest figure.

MIAMI HURRICANES POSTGAME NOTES
– Miami dropped to 0-4 in its all-time series with Arizona State, including 0-1 in postseason play.
– The Hurricanes fell to 7-14 all-time in NCAA Tournament play, including 5-8 in Meier’s tenure, 4-2 at home and 2-2 as a No. 4 seed.
– Sunday marked just the fifth time in the Hurricanes’ 34 games that no Miami player recorded a double-double, including the second in a loss (11/18/18 at Iowa State).
– With 182 blocked shots in her career and 69 this season, Hof finished second and third, respectively, on Miami’s leaderboards.
– Hof entered the top 10 on the program’s all-time games played list with 127 appearances and eclipsed 2,750 minutes played at Miami, Gray eclipsed 800 points and reached 150 assists as a collegian, Mompremier surpassed 2,000 minutes played in her career and sophomore guard Endia Banks reached 150 made field goals as a Hurricane.