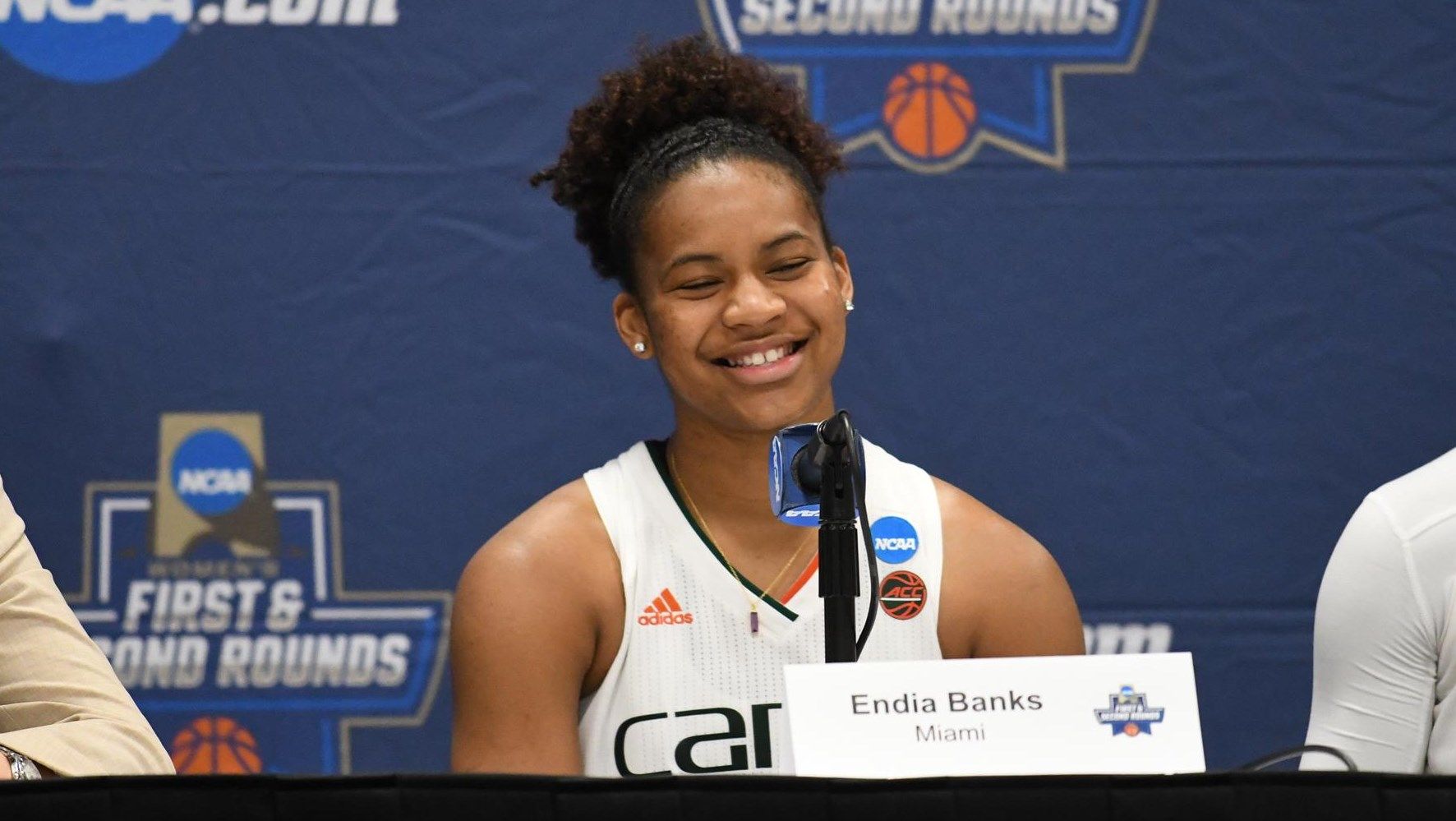 No. 19/15 Miami (25-8, 12-4 ACC) led for 36-plus minutes and trailed for just 24 seconds, but saw a 14-point third-quarter lead turn into a one-point fourth quarter deficit. However, the Hurricanes controlled play down the stretch to defeat the Eagles in the opening round for the second time in three years.

“It was a great basketball game. We did a heck of a job to have a 12-point lead at halftime, but it can go away in a heartbeat with the way they play,” Miami head coach Katie Meier said. “They got some fuel from some tired shots that we took and they started hitting their shots. They got their rhythm threes, which we were trying to prevent. I thought we had great ball control in the first half and then we just lost that in the third quarter, but we brought it back in the fourth and really executed.”

The Hurricanes made their first four field goals, including two from beyond the arc, en route to an early 15-6 edge. Despite FGCU (28-5, 16-0 ASUN) connecting on four 3-pointers in the opening frame, Miami held a 21-15 lead when the horn sounded.

After the Eagles pulled within three in the second frame, Miami closed it on a 13-4 run in the final 5:06 to take a 38-26 advantage into the locker room.

Miami scored the first basket of the second half to take a game-high 14-point lead, but FGCU then went on a 19-5 run to tie the score at 45 with 1:18 left in the third quarter. The sides exchanged 3-pointers—the Eagles went 6-of-11 from deep in the session—to close the period and the game entered the final 10 minutes deadlocked at 48.

The Eagles countered with seven straight points, but Miami never let it get any closer than four, earning an NCAA Tournament Round of 64 victory for the third time in five seasons.

“We had great command, we were willing to make the extra effort plays on the defensive end and we were bursting to the rebounds,” Meier said of Miami’s strong finish. “It was both ends. It wasn’t that we just started scoring again—we had a terrible third quarter offensively—it was our effort. As soon as our effort came back and the kids saw, ‘We have six minutes to go, okay we got this, we can work through some stuff,’ I thought we really took the game over.”

In addition to recording her eighth 20-point showing of the season, Mompremier notched her ACC-best 25th double-double, as she grabbed 10 rebounds to go along with a season-high-tying thee blocks, tied for the third-most in Miami’s NCAA Tournament history. Senior forward/center Emese Hof also turned in her 10th double-double of the year, finishing with 10 points, a game-high 12 rebounds and four assists.

Banks, who previously had three outings with multiple 3-pointers, made three shots from long range for the first time, tied for the fourth-most in NCAA play by a Hurricane, and finished point a shy of her career high. The Duluth, Ga., native, whose outing Meier labeled as “heroic,” added seven rebounds and four assists, each one off her season best, in a season-high 32 minutes of action.

Jewett-Giles led all scorers with 24 points, finishing 9-of-20 from the floor. The only other Eagle in double figures was redshirt senior guard Destiny Washington with 10 points.

Miami has now reached 25 wins for the fifth time in school history, including the first since going 26-6 in 2011-12, and tied for its fourth-most wins in a campaign.

In addition, the Hurricanes are now 17-2 at home this season, tied for the second-most wins on their home court in program history. It is fourth time they have compiled 17-plus home victories, including the first since going 20-0 in 2011-12.

Up next for the Hurricanes is a home matchup with fifth-seeded Arizona State, ranked No. 22/20, Sunday at 7 p.m. in the NCAA Tournament Round of 32, live on ESPN2.

MIAMI HURRICANES POSTGAME NOTES
– Miami improved to 3-0 in its all-time series with FGCU, in which each matchup has been a postseason contest, including 2-0 in NCAA Tournament competition.
– Making their 14th appearance in the field, the Hurricanes moved to 7-13 all-time in NCAA Tournament play, including 5-7 in Meier’s tenure, 4-1 at home and 2-1 as a No. 4 seed.
– Mompremier and Hof have combined for 35 double-doubles across 29 of Miami’s 33 outings this season, while Cornelius has one of her own to give the Hurricanes 36 total.
– Five different Hurricanes have combined for 29 total 20-point performances across 26 of the team’s 33 games this season.
– Mompremier eclipsed 200 made free throws as a collegian, Banks surpassed 50 made free throws at Miami and Gray reached 1,750 minutes played in her career.