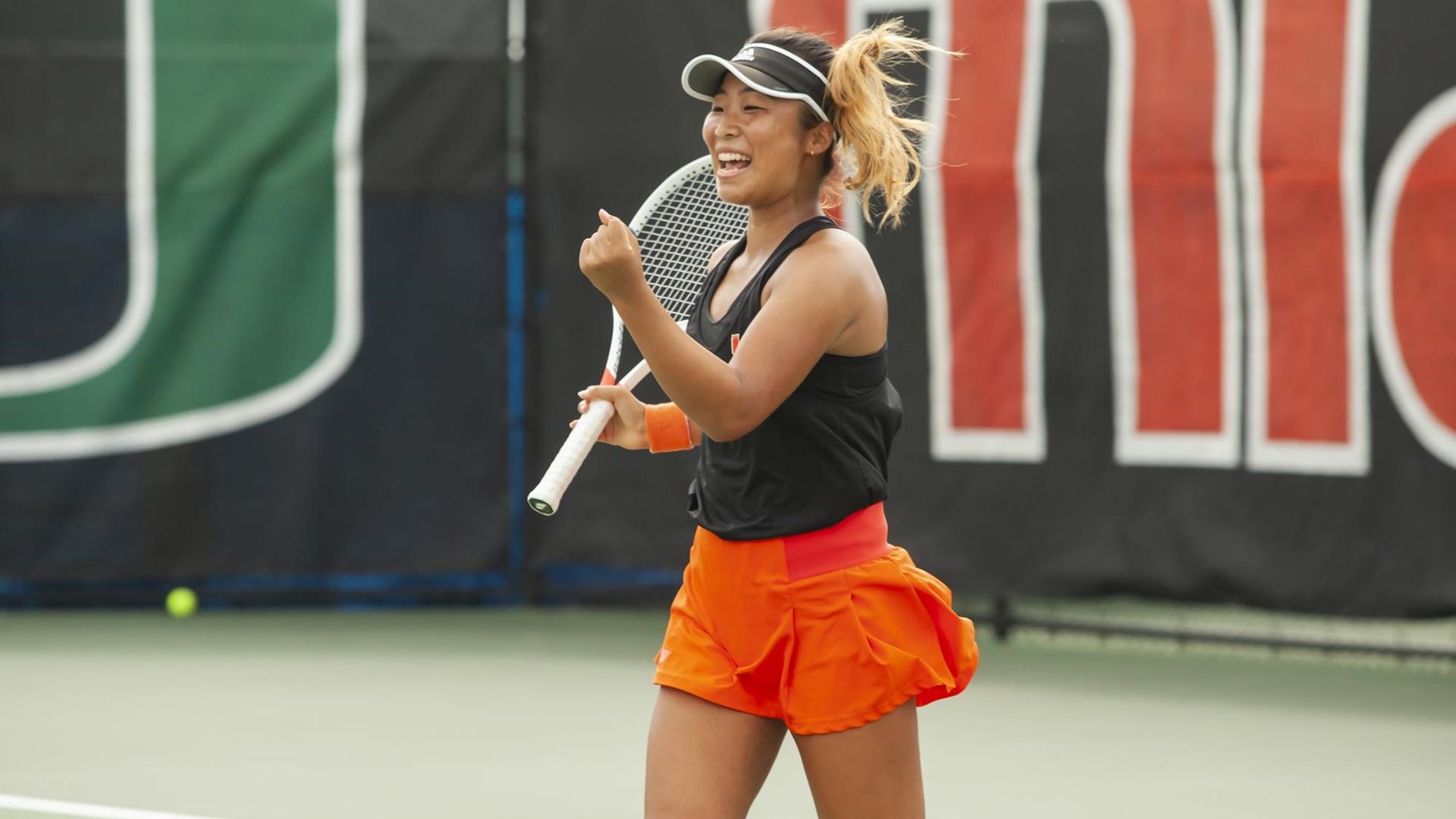 CORAL GABLES, Fla. – The University of Miami women’s tennis team picked up its third victory in as many days by downing No. 31 Georgia Tech, 6-1, Sunday at the Neil Schiff Tennis Center.

“I thought the girls just did a great job of just showing up and taking care of business, which is what we’ve been talking about doing,” Miami head coach Paige Yaroshuk-Tews said. “Regardless of how your opponent is playing, to get as many 6-0 sets as we did, I think is a good sign. And then to follow it up and not have anything go three [complete sets], I thought was another good sign.”

Georgia Tech (6-8, 3-4 ACC) got on the board first in doubles action, as Gia Cohen and Nami Otsuka picked up a 6-2 victory over junior Estela Perez-Somarriba and sophomore Ulyana Shirokova. It marked the first time in eight outings together the Miami pair has come up on the short end.

Junior Yuna Ito and freshman Lucia Marzal evened the doubles tally with a 6-2 triumph against Nadia Gizdova and Kenya Jones.

Ito rolled to a dominant 6-0, 6-2 victory against Deminova to give Miami its first singles win of the day and double the Hurricanes’ lead.

Freshman Carla Girbau, in her first action since March 1, turned in an impressive performance versus Gizdova, tallying a 6-1, 6-2 triumph.

Marzal clinched the Hurricanes’ fifth consecutive win by defeating Flores, 6-3, 6-4. Just seconds later, Achong tacked on a fifth point by finishing off a 6-0, 7-5 decision against Otsuka.

Second-ranked Perez-Somarriba recorded Miami’s final point of the day with a straight-set triumph in a top-15 showdown. The Madrid native took 12 of the final 16 games to defeat No. 11 Jones for her third top-30 win of the spring, including the first in the top 15.

“Kenya is a great player. I think that Stela had to make a few adjustments there, three games into the first set; Kenya was hitting the balls extremely deep,” Yaroshuk-Tews said. “Stela was getting away from her game a little bit and we just spoke about just staying with her game, staying on her game plan and not really worrying about Kenya too much, that would prove to work out. I was happy that it did today.”

In the lone match not determined in two sets, Cohen eked out a narrow 6-3, 4-6, 1-0 (10-6) victory against Madcur to give the Yellow Jackets their lone point in the final contest of the day.

With the win, Miami took a 13-12 lead in the all-time series with Georgia Tech and has now won eight of the past nine affairs.

The Hurricanes will be back in action Friday at 3 p.m., when they take on No. 12 NC State in Raleigh, N.C.