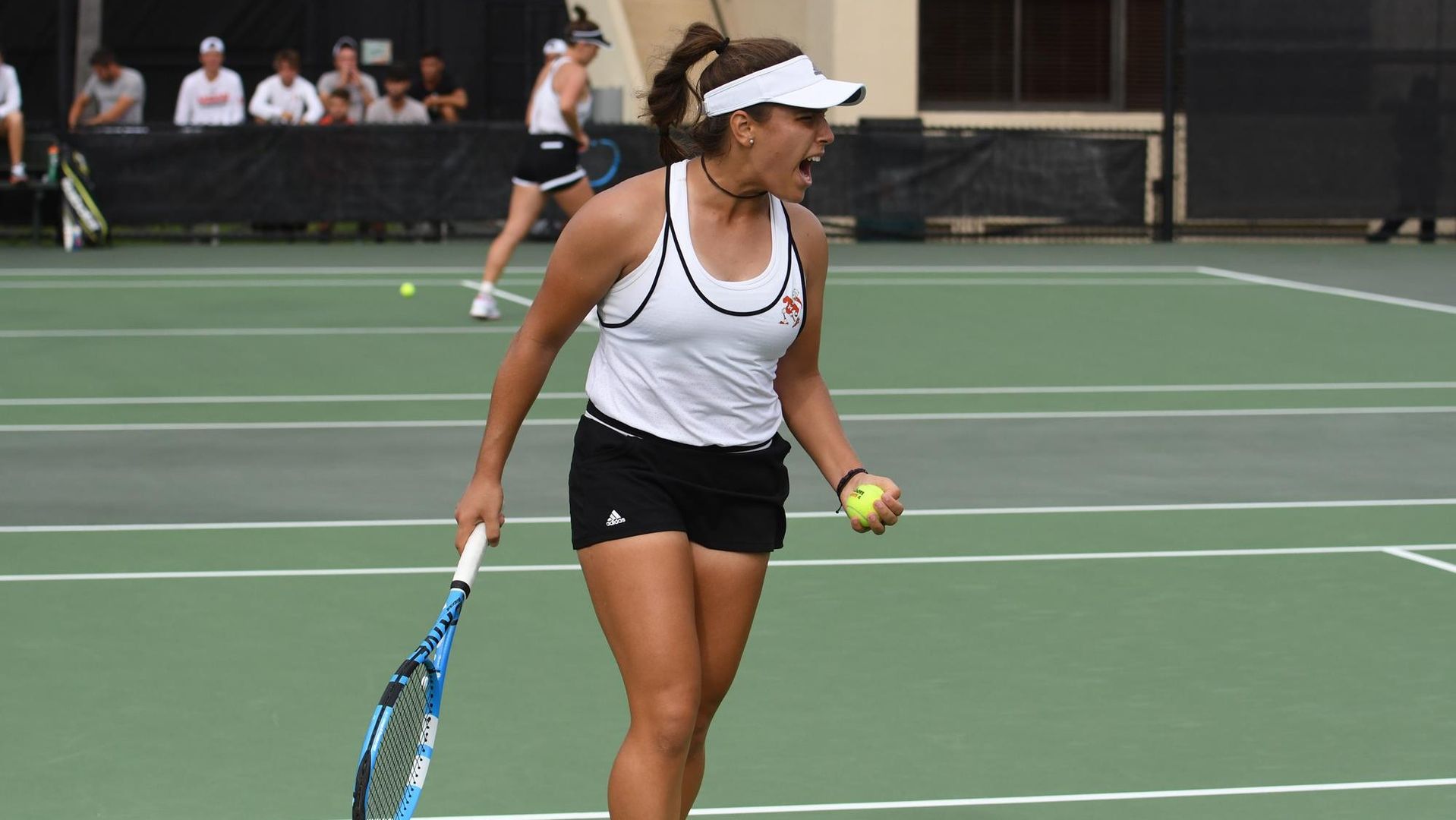 CORAL GABLES, Fla. – Following an 11-day layoff, the University of Miami women’s tennis team returned to action Friday morning with a 5-2 victory over No. 42 Notre Dame at the Neil Schiff Tennis Center.

No. 27 Miami (9-3, 3-2 ACC) grabbed the first three points of the match, en route to their ninth win in the past 10 meetings against the Fighting Irish.

“It was nice to get back out there. Pretty happy with how we’re playing doubles,” Miami head coach Paige Yaroshuk-Tews said. “[We are] starting to really just settle in to playing on our terms in tough moments. The girls are starting to understand that it’s kind of normal to be holding serve and that a lot of these matches could get tight, get to deuce points and that we have to just stay true to our philosophies on finishing these sets. I think we’re doing that a little bit better in doubles.”

The Hurricanes opened the day with an impressive showing in doubles action on all three courts. Junior Estela Perez-Somarriba and sophomore Ulyana Shirokova tallied the first win for Miami with a 6-1 decision over Brooke Broda and Bess Waldram.

Minutes later, in a top-60 matchup, freshman Daevenia Achong and senior Daniella Roldan clinched the Hurricanes’ opening point. The No. 44-ranked pair in the nation recorded a 6-2 victory over No. 57 Cameron Corse and Zoe Spence.

Playing with the highest ranking of her career, second-ranked Perez-Somarriba cruised to 6-1, 6-0 triumph in a top-60 affair with No. 58 Spence, doubling Miami’s edge. The Madrid native took the first five and final seven games to extend her winning streak to 12.

With a first set still going on Court 3, Marzal tacked on the Hurricanes’ next point, as the Valencia, Spain, native earned a 6-1, 6-4 decision against Taylor to make it 3-0.

“Obviously, very happy with how fast we got up two more points after we got the doubles point,” Yaroshuk-Tews said. “I think it’s important, like I told Lucia, that her match didn’t go 5-all on Court 6. Then things get a little more difficult, but she was able to get the point up pretty fast.”

Broda, up a set, then rallied from a 3-5 second-set deficit to defeat Shirokova, 6-4, 7-5, and move the Fighting Irish within a point.

The scores of both remaining matches, each of which featured a first-set tiebreaker, were tightly contested. However, both Ito and Achong seized control late and had simultaneous match points with either one capable of clinching the overall victory.

“Coming down to three and four, [it was] newbies that haven’t been in the lineup in that situation before. I thought they were very poised,” Yaroshuk-Tews said. “I thought they handled the moment well and  . . . Daev was fairly efficient. It took Yuna a little time to figure things out in the first set, but she was able to make a few changes that proved to work well through the duration of the match.”

“All in all, I think a pretty solid day,” Yaroshuk-Tews said. “Obviously, [there are] areas that need to be improved, but that’s the nature of the beast. Back at it tonight.”

The Hurricanes return to the court later today for the second leg of their doubleheader, as they host Boston University at 5 p.m.