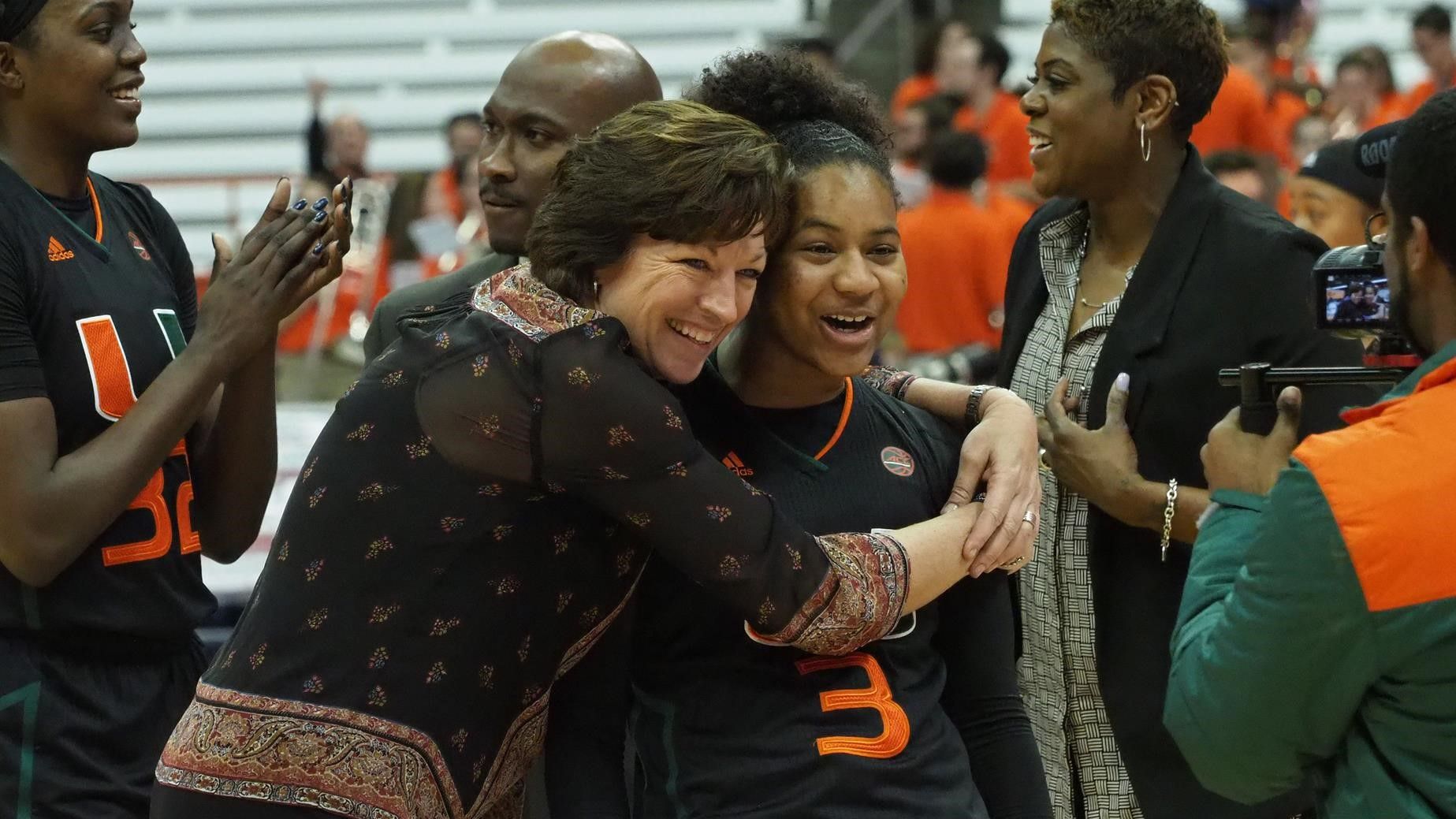 Catching Up with Katie Meier

The Hurricanes must wait until the ESPN selection show at 7 p.m. on March 18 to learn their seeding and opponent. With six wins over ranked opponents in nine tries, the Hurricanes are one of the more tested teams entering the postseason.

Meier has led the Hurricanes to a 24-8 (12-4 ACC) record in her 14th season at Miami. The impressive play of Emese Hof and Beatrice Mompremier, two First Team All-ACC players, has no doubt made Meier’s job easier.

“We’ve absolutely relied on them,” Meier said. “In big moments, clutch moments, whenever we’ve needed them, [they have been there]. They’ve been professional, mature and really reliable.”

Hof has been having a great senior year so far. She has overcome an ankle injury to earn ACC Most Improved Player honors with averages of 14.6 points and 8.3 rebounds.

Mompremier is also having a huge year during her first season on the court after transferring from Baylor. The Miami native is averaging 16.9 points and 11.9 rebounds, tallying numerous accolades throughout the year, including three ACC Player of the Week distinctions.

Although all of the previously mentioned wins are impressive, the most impactful one may have been against the Orange.

“Well, I think [the team’s confidence] really started with the win at Syracuse,” Meier said.

“We went to a ranked opponent’s house, in the Carrier Dome, which is a really incredible place to try and play a basketball game . . . and, I thought, handled the game and controlled the game from the tip. [That gave me the] thought, ‘We’re really good, we’re not a fluke. We’re good. We’re going to be tough for someone to beat.’ So, I think our entire team’s confidence went up from that game.”

Although Miami’s most recent game was a 92-85 loss to Syracuse, Coach Meier had some positive takeaways from the ACC Tournament matchup.

“Because of our size, the games come down to guarding the 3-point shot and then the other team trying to guard us inside. In the first half, their 3-point shot kind of dominated. In the second half, our post players kind of dominated,” Meier said. “In the fourth quarter, Miami needed to hit a couple of threes to answer . . . and, we had some good looks and we just didn’t hit them. Syracuse hit theirs and that was the game.

“Part of me is really proud that on a day like that—a team having an incredible, career night—we still almost won. So, that’s something we need to be able to answer.”

Coach Meier believes Miami must be able to adapt in order to win in the NCAA Tournament.

“We need to be able to play any different style that is required to win a game. And, I think that we’ve proven that this year.  If we need to grind it out, slug it out, we can.”

Meier continued, “If we need to withstand 15 or 16 made 3-pointers, I think we can do it. I don’t want that to happen, but if it does happen, I don’t think we’ll panic. I think we’ll be prepared.”

While the play of Hof and Mompremier may be crucial in determining Miami’s NCAA Tournament success, with an experienced team and head coach, the Hurricanes possess the ability to beat any team on any given day.