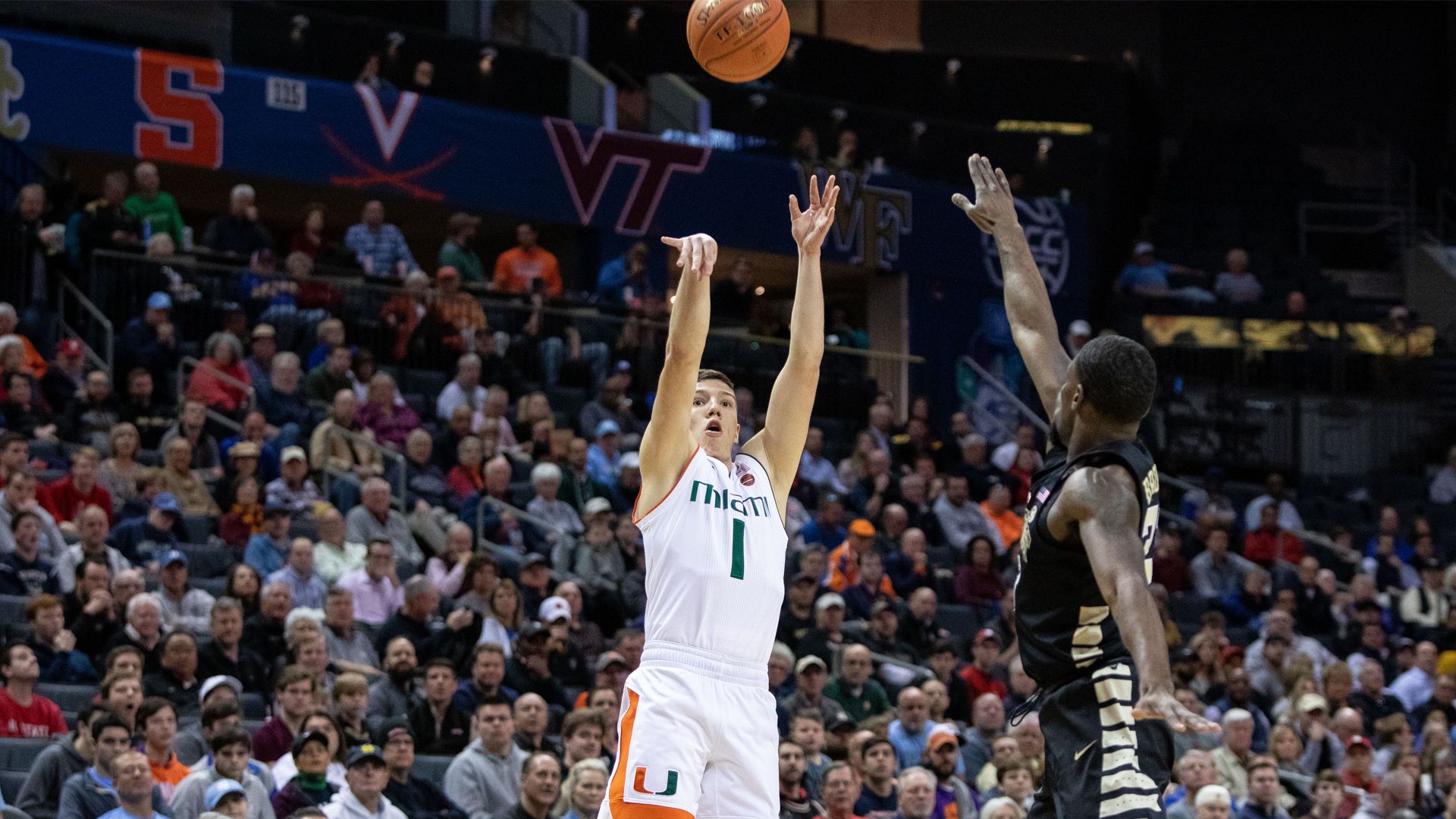 CHARLOTTE, N.C. – Four Hurricanes scored in double figures on Monday afternoon as the University of Miami men’s basketball team defeated Wake Forest, 79-71, to advance to the second round of the New York Life ACC Tournament. The 12th-seeded Canes will face fifth-seeded Virginia Tech on Wednesday at approximately 2 p.m. ESPN and Raycom will have the television broadcast.

Junior guard DJ Vasiljevic and senior guard Anthony Lawrence II combined to score 41 points for the Hurricanes (14-17). Lawrence recorded his seventh double-double of the season and fifth in his last six games with 20 points and 10 rebounds. Vasiljevic’s 21 points was one shy of his career high.

The pair were joined in double figures by sophomore guard Chris Lykes (13 points) and redshirt senior Zach Johnson (12 points). Miami shot 27-of-53 (50.9 percent) from the field, while scoring 19 points off 15 Wake Forest turnovers and dominating the Demon Deacons in the paint, 38-22. Wake Forest (11-20) finished its season by shooting 27-of-57 (47.4 percent) from the field.

The Deacons were led by Brandon Childress and Jaylen Hoard who both scored 16 points. The duo were joined by Chaundee Brown (13 points), Isaiah Mucius (10 points) and Torry Johnson (10 points) in double-digit scoring.

Miami scored the game’s first six points courtesy of a Vasiljevic three-pointer, a Lawrence free throw and a layup by Johnson. Wake Forest took its first lead in the first half with 15:18 on the clock off a three-pointer by Johnson. Vasiljevic closed the half with his third three-pointer of the game just before the buzzer and finished the first 20 minutes, giving Miami a 34-31 lead heading into the locker room. The Australian native led the Canes with 12 points and two rebounds in the first half.

Out of the break, Miami put together an impressive second half performance on offense, shooting 57.1 percent and scoring 45 points. The Canes took their biggest lead, 68-56, with 5:32 to go before Wake cut the lead to four, 74-70, with 1:01 left. Lykes hit a layup as well as two free throws to help put the game away.

Game Notes
• Miami improved to 15-13 all-time in ACC Tournament action, including 9-6 under Jim Larrañaga. The Canes have won at least one game in the tournament in seven of Larrañaga’s eight seasons.
• Miami shot 50.9 percent from the field, its best shooting effort since hitting on 54.5 percent of its attempts on Dec. 29 against Campbell.
• The Canes shot 57.1 percent in the second half, its best shooting in a half since hitting on 57.7 percent of its attempts in the second half against North Carolina on Jan. 19.
• Anthony Lawrence II played in his 129th career game, tied for sixth most in program history.
• Lawrence scored 20 points and now has 1,039 career points. He moved into a tie for 36th place in scoring in program history with Reggie Johnson (2009-13), passing Rick Jones (1,029, 1964-67) and Jerome Scott (1,038, 1988-92).
• Lawrence recorded his ninth career double-double, including his seventh this season and fifth in the last six games.
• Lawrence recorded three steals and now has 141 career steals, which stands alone in ninth place in program history.
• DJ Vasiljevic scored 21 points, one shy of his career high.
• Vasiljevic hit four 3-pointers and now owns 195 career triples, eighth in program history.
• Chris Lykes scored 13 points, reaching double figures for the 26th time in 31 games this season.
• Playing in his 134th career game, Zach Johnson scored 12 points and now has 1,718 career points (1,344 at Florida Gulf Coast, 374 at Miami).