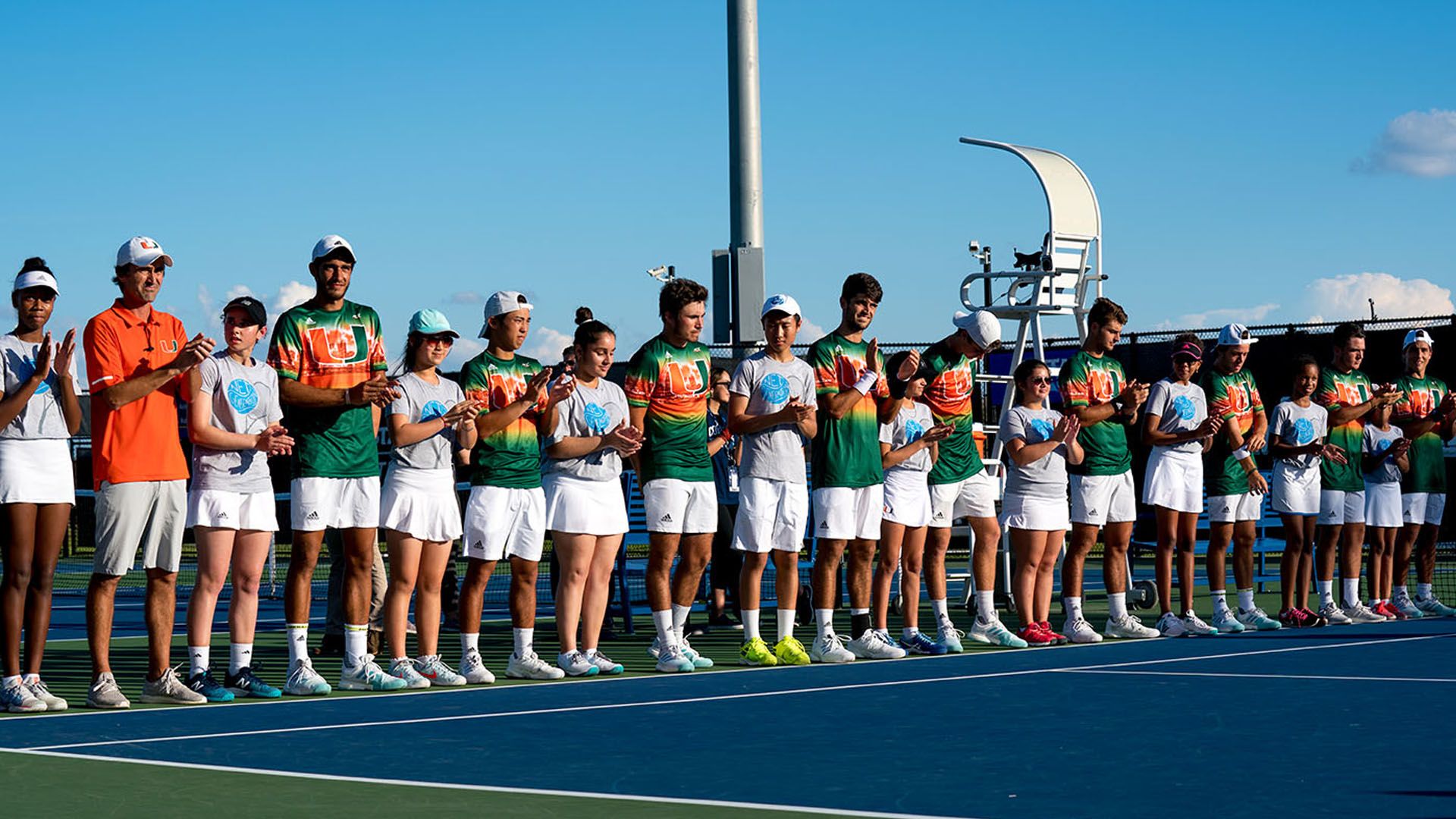 ORLANDO – Returning to the USTA National Campus Collegiate Center Sunday night to take part in the USTA Collegiate Series, the No. 43-ranked University of Miami men’s tennis team dominated from start to finish to sweep No. 37 Florida State, 4-0.

The Hurricanes have now opened ACC action with its best start since reaching the equivalent mark during the 2011 season.

“Always great to beat an ACC team, especially Florida State,” Miami head coach Aljosa Piric said. “The guys were ready to compete today. We have been practicing well this week, following a tough match last weekend. Collectively, we showed up on every court and the whole team stepped up today. And that is what it takes. It takes the whole team to go out there and just lay it all down on the line and fight for each other, and that is what the guys did today. I am proud of them; I am proud of the fight we had.”

In the only setback of the afternoon, redshirt junior Dane Dunlap and junior Stephen Madonia looked to mount a comeback at No. 2 doubles, trailing 2-5 against Bryn Nahrung and Lucas Poullain. The duo picked up back-to-back games and were facing a deuce in the 10th game; however, the Seminoles earned the win, 6-4.

In singles action, the Hurricanes continued to hold the edge by securing five opening sets.

Competing at No. 3 singles, Dunlap quickly doubled the Canes’ lead with a 6-3, 6-4 win over Thongoana.

Looking to remain unblemished in 2019, sophomore William Grattan-Smith fell behind 1-4 in the second set against Enzo Le Seguillon, after securing the first set 6-4. Taking it one game at a time, the Atlanta native rallied off five straight games to seal the victory, 6-4, 6-4, and improve to 8-0 this spring.

Playing No. 4 singles, Bojan Jankulovski, No. 71 in the Oracle/ITA national singles rankings, found himself facing a 3-5 deficit in the opening set against Juan Martin Jalif. The sophomore rebounded winning four consecutive games to claim the set, 7-5. Trailing 3-4 in the second set, the Skopje, Macedonia, native picked up three straight games to clinch the victory for the Hurricanes, 7-5, 6-4.

The remaining three matches remained unfinished, with the Hurricanes holding the advantage on courts 1 and 5.

“We are going to enjoy this as we drive back to Miami. However, tomorrow we have got to get prepared for a tough week ahead,” Piric said. “We have UNC Wilmington, a tough team, coming in on Tuesday, and then following that match, we have to be ready to battle Boston University.”

The Hurricanes will return to the Neil Schiff Tennis Center Tuesday for the first of five home matches over a six-day stretch. The Hurricanes will play two of their final three non-conference matches on Tuesday, with a doubleheader against aforementioned UNC Wilmington (11 a.m.) and Boston University (4 p.m.).