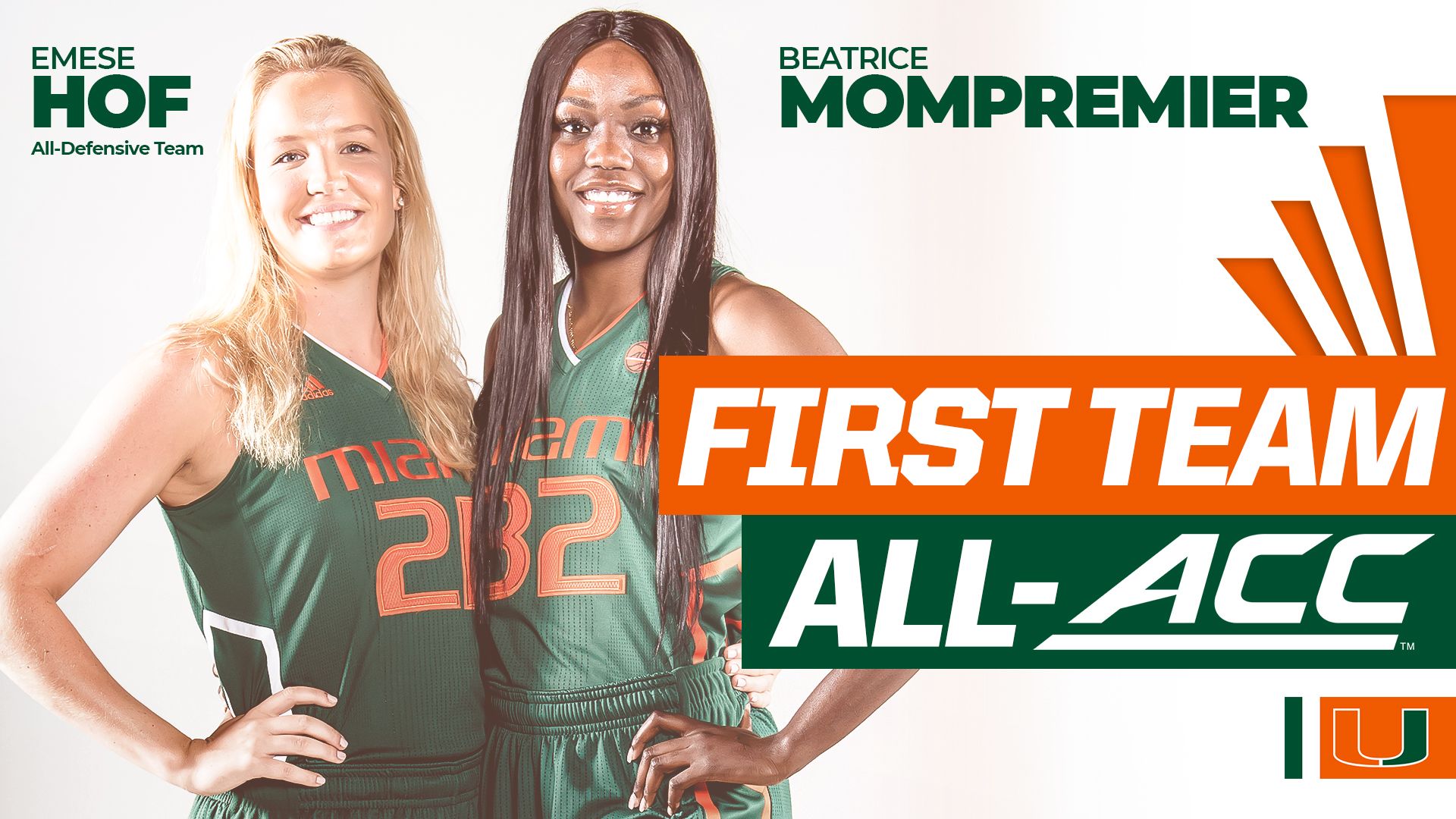 Emese Hof and Beatrice Mompremier each received the accolade from both the Blue Ribbon Panel and the ACC Coaches. Miami and Notre Dame are the only schools with two representatives on the 10-player first team.

Along with her all-conference honor, Hof also earned one of the five spots on the ACC All-Defensive Team, which is just voted on by the league’s coaches.

“I am so thrilled for both Emese and Beatrice. They have been a dominant duo in the ACC and it’s just wonderful that people who really matter have noticed their hard work,” Miami head coach Katie Meier said. “They both, ultimately, are team players and have been tremendous leaders throughout this ACC season. I love that they both have been recognized because their chemistry and unselfishness have really carried our team.”

Hof is averaging 14.3 points, 8.3 rebounds and 2.1 blocks per game, while shooting 59.3 percent from the field. Those numbers place her No. 18, sixth, second and third in the ACC, respectively.

In addition, the senior forward/center is tied for fifth in the conference with 10 20-point games and tied for sixth with nine double-doubles. She is one of two players to earn both First Team All-ACC and ACC All-Defensive Team plaudits.

Mompremier has averaged 16.5 points and 12.0 rebounds on the season, while shooting 53.0 percent from the floor. She ranks eighth in the ACC in scoring, second in rebounding and No. 11 in field goal percentage.

A redshirt junior forward, Mompremier leads all ACC players with 23 double-doubles. The Miami native is fifth in the nation in double-doubles and eighth in rebounding.

In her first season playing for the Hurricanes, Mompremier has six 20-point games and six 15-rebound performances. She has logged double-digit points in 27 of her 30 appearances and pulled down double-digit rebounds 23 times.

This is the first time since 2012-13 the Hurricanes have two First Team All-ACC selections. That year, Stroman received the recognition from both voting outlets, while Stefanie Yderstrom did so from the ACC Coaches.

Hof and Mompremier are the seventh and eighth Hurricanes to pick up First Team All-ACC distinction and account for the 12th and 13th such honors in program history, including the first ones since Adrienne Motley in 2015-16.

The complete lists of All-ACC, ACC All-Defensive and ACC All-Freshman honorees can be found HERE.