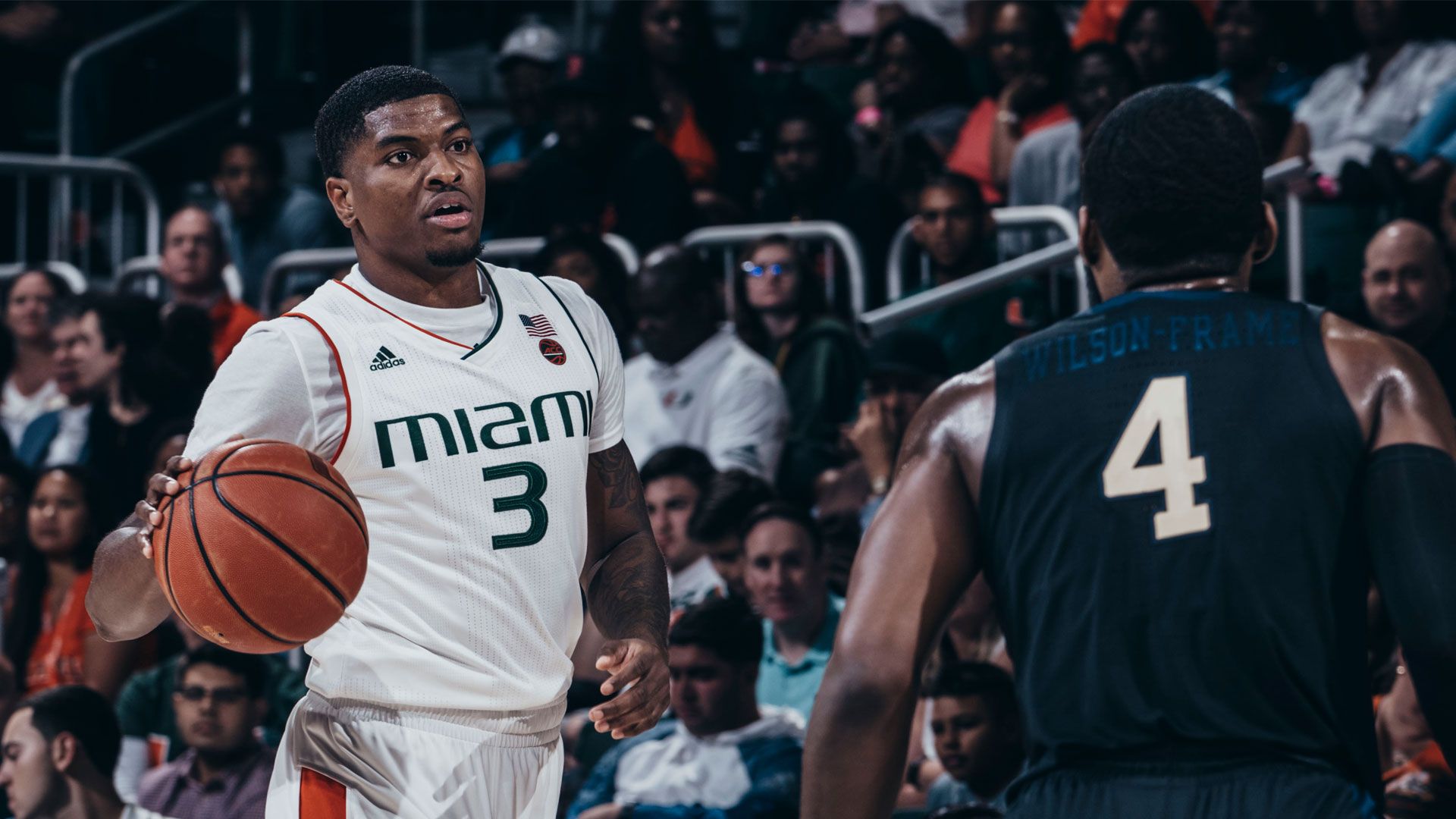 Making his 127th appearance for Miami (13-16, 5-12 ACC), Lawrence notched a career-high 27 points and pulled down 11 rebounds, recording his fourth double-double in the past eight games. Izundu recorded  his ninth career double-double, posting 14 points and a game-high 14 rebounds.

The duo were joined in double figures by sophomore guard Dejan Vasiljevic (13 points) and Johnson (12 points). Overall, the Hurricanes shot 27-of-63 (42.9 percent) from the field, while dominating the Panthers in the paint, 36-20, and out-rebounding Pitt, 38-34. Meanwhile, Pittsburgh closed out the contest shooting 21-of-48 (43.8 percent) from the field.

Pittsburgh (12-18, 2-15 ACC) was led offensively by Jared Wilson-Frame, as the senior posted 18 points and shot 6-of-11 from beyond the arc. The guard was joined by Xavier Johnson (10 points) and Kene Chukwuka (10 points) in double figures.

Following a free throw by Terrell Brown with 18:18 remaining in the opening half, Pitt took an early 1-0 lead. Moments later, Izundu finished a jumper to give the Canes an advantage they would never relinquish, extending their lead to as much as 11 and to double figures a trio of times in the half. However, a 3-pointer by Wilson-Frame with just four seconds remaining in the period cut the halftime lead to just five, 36-31.

Out of the break, Izundu and Lawrence took over, together outscoring Pitt 18-16 through the opening 9:14 of the half. During the stretch, Lawrence shot a perfect 3-of-3 from deep and 4-of-4 from the field.

Leading by seven with under two minutes to play, Miami closed out the final 1:41 of action outscoring the Panthers, 9-3.

The Hurricanes will close out the regular season Friday at 7 p.m., when they travel to Blacksburg, Va., to battle No. 15/16 Virginia Tech. The game will be broadcast live on ESPN2.

Game Notes
• Miami won its sixth straight game against Pitt.
• The Canes improved to 10-3 when holding their opponent to 65 points or fewer.
• Anthony Lawrence II played in his 127th career game, seventh most in program history.
• Lawrence scored a career-high 27 points and cracked the 1,000 career point mark. He has 1,004 career points and became the 39th player in program history to reach the 1,000-point plateau.
• Also with 11 rebounds, Lawrence recorded his seventh career double-double, including four in the last eight games.
• Ebuka Izundu picked up his ninth career double-double, including his eighth this season, with 14 points and 14 rebounds.
• Izundu racked up double figures in rebounds for the 12th time in his career.
• Izundu picked up his most rebounds in his career in ACC play.
• DJ Vasiljevic recorded a career-high four steals.
• Zach Johnson scored 12 points and now has 1,692 career points (1,344 at Florida Gulf Coast, 348 at Miami).

Postgame Quotes
Miami Head Coach Jim Larrañaga
Opening statement:
“Just so proud of our team and our seniors in particular. Anthony Lawrence was just sensational tonight from start to finish. He played 38 minutes and 47 seconds, and just did everything well.  He had 27 points, 11 rebounds, 4 assists. Just a great all-around game. Zach Johnson and Ebuka Izundu, our other two seniors. Chris Lykes I thought did a great job of running the team. DJ Vasiljevic tweaked his back yesterday and the game plan was to play without him. Javier (Jimenez), our trainer, did a great job. DJ spent hours and hours and hours trying to get his back loose at the shoot around today. He did not even dress (for shootaround) because it was so tight. And then, miraculously, at about 7:15, Javier told me that it looked like he could go. At least, he could try to stay warm, stay loose, and give us some minutes. So he didn’t start, but he came in off the bench and obviously made some critical shots, scoring 13 points and he played 35 minutes and 43 seconds. So, his back must have not hurt him too badly.”

On Anthony Lawrence …
“One of the things about Amp is that he’s always been very, very capable physically to score, hit threes, make free throws, get assists. The challenge for him throughout his career is [that] the players and personnel that we’ve had, have required him to play so many positions. And he’s done a magnificent job of playing the 4 and being a stretch 4, playing the 3 and guarding a really good three-point shooter, or playing the 1 and handling the ball and creating shots for his teammates. And he did all of that tonight. He’s the guy who threw the lob to Ebuka when it was only four seconds left on the shot clock. They hooked up, it’s two seniors who’ve been together for four years and that was a really critical basket. It really put us in control. And, so, Amp deserves a lot of credit for leading us to victory tonight.”

On emotions of last home game for seniors
“I think we’ve played pretty well at home, but I thought tonight in particular, the seniors were really focused. Ebuka, as he has a tendency to do, picked up a foul in the first minute and a half. And he picked up a foul with about 10 minutes to go. He just puts so much pressure on me to figure out whether to leave him in or take him out. And, fortunately, he was in down the stretch. He made an important free throw, made a jump hook, caught the lob there and went back up strong He ended up with 14 points and 14 rebounds.”

On Izundu’s mother being in attendance and seeing him play for the first time …
“I think his [Ebuka] mom had to love that. My guess is she doesn’t know anything about basketball – she’s never seen him play. She’s just happy to see her son out there healthy and working hard. And he’s two months away from graduation. He and Amp will graduate. Zach Johnson’s already graduated and [is] working on his master’s degree. So, we’re very proud of these kids academically as well. This is a great school academically, I’m sure you all know that. Top 50 in the country, [with] great faculty, [and] great academic support.”

On the season as a whole …
“For me, it was probably the most challenging season I’ve had as a head coach because it was very difficult to do what we like to do in terms of practice preparation and game preparation. So when DJ tweaks his back and we don’t have him, we had six scholarship players, we had two walk-ons, and we had Rodney Miller sitting out, we had Kam McGusty with pink eye so he wasn’t even there. So it’s hard to prepare. Yesterday we had the scout team with our managers and the walk-ons just run through stuff and no one shoot because we didn’t want anybody else to get hurt. Looking at last year when we practiced 93 times up until the end of the season, this year [we practiced] 75. So, 18 days we took off.”

Pittsburgh Head Coach Jeff Capel
Opening statement…
“Congrats to Miami, [its] seniors were terrific. [Anthony] Lawrence–I think it may have been his career high–but he was by far the best player on the court; he was the smartest player on the court, the most poised player on the court and the best player. And he had an outstanding game, both scoring, rebounding and really controlling the team. I thought [Ebuka] Izundu, his energy, having a double-double. Obviously, we all know how good [Chris] Lykes is. Their older guys really stepped up and made plays. [Dejan] Vasiljevic hit a huge three, late. [Zach] Johnson able to get out in transition, getting dunks out in transition. You know, getting to the basket and making layups. I’m disappointed in us. I thought we had some opportunities, but we have to be able to be stronger in certain situations. We have to be able to step up and make free throws. We have to be able to get a rebound. We have to be able to finish a play. And we have to value the basketball. So, I am disappointed in us for that. But, congrats to them.”

On being in the stretch they are in and what weight that has on the teams…
“You know, it could, but we have to be tougher. Because they are in a similar stretch and they were able to step up and make the plays. Whether it was hustling for a rebound, stepping up and making free throws. I though Izundu made two big free throws. He hadn’t been a good free throw shooter, but he stepped up and made two big ones. Us not understanding, the whole game that all Johnson has done is made break away layups. And we were trying to pressure him and allow him to drive in the zone to get to the basket. But we have to be smarter in those situations and that is where growth has to come. These little things, we have talked about them since I got the job, the little things we have to be really good at, there was an important time where we were pretty good at it. But here, lately, we have not been.  And that’s why we haven’t been able to get over the hum in these games where we have had opportunities to.”

On turnovers…
“Yeah, turnovers hurt us. And certainly the points off of turnovers is what really hurt us. Just some decisions, I thought the way we ended the first half, we found something that worked for us and I thought that was really good. And we went back to it in the second half. Instead of just allowing the ball to move and find the right play, we get to where, ‘I have to make a play, I have to do that,’ and that is where we get into trouble. And it gives them breakaways. It gives them breakaway layups and easy baskets. And one of the things we wanted to do was try and prevent easy baskets for them. And we didn’t do a good job of that.”