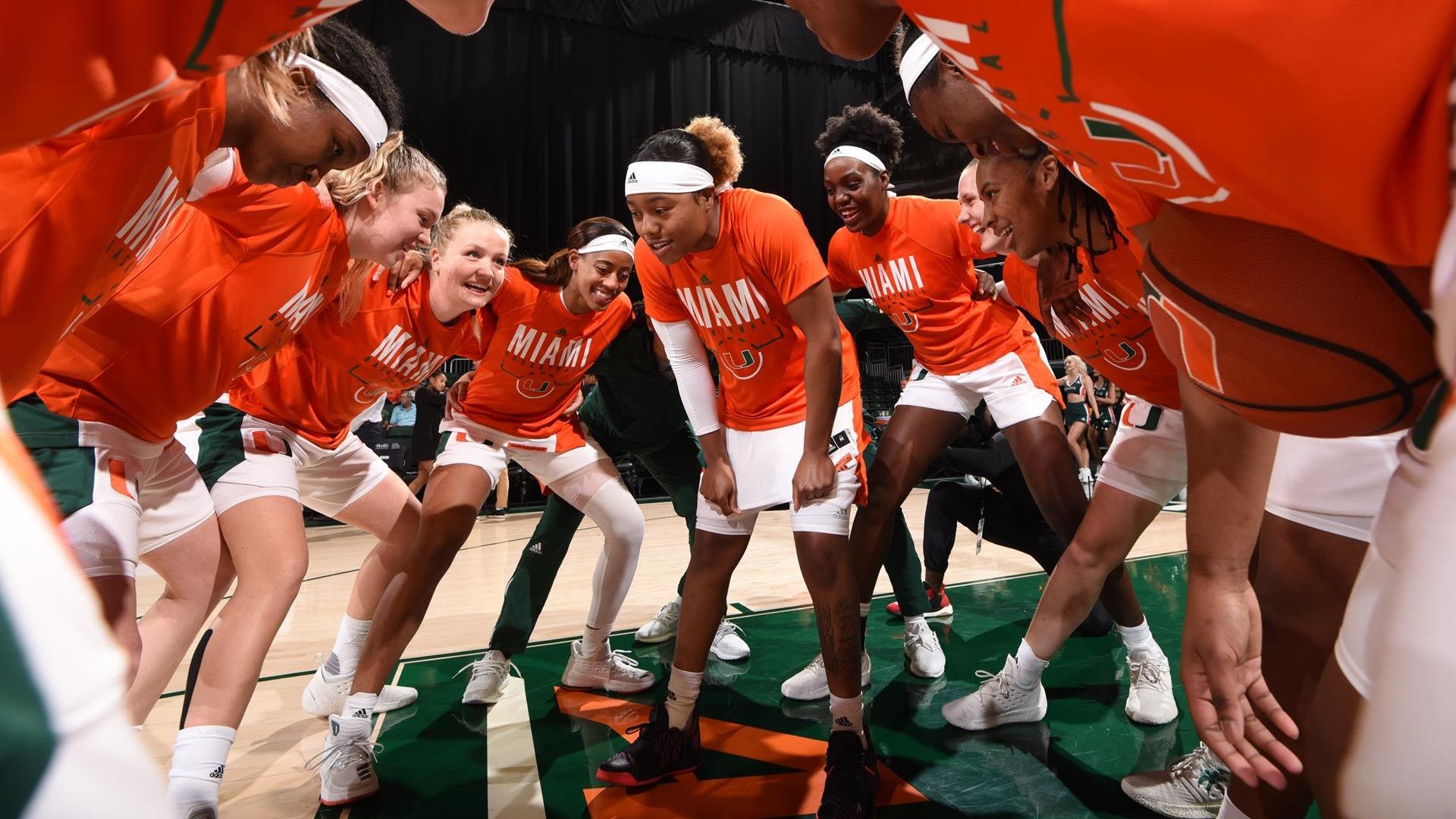 “That was our last non-March game,” Miami head coach Katie Meier said. “We have a lot to learn and we have to get after it and get ready for March.”

Mompremier tallied eight points and seven rebounds in the first period alone, including scoring a game-opening basket to surpass 1,000 points in her career. However, Georgia Tech (17-11, 7-8 ACC) held a 14-13 lead through 10 minutes of action.

Miami held the Yellow Jackets to eight points in the second frame and ended it on a 9-2 run to take a 30-22 edge at the break. Mompremier posted a first-half double-double with 14 points and 13 rebounds in 18 minutes of action.

The Hurricanes continued to extend their advantage in the third period, closing it by making six of their last eight shots, including five straight to begin that span. Miami took a then-game-high 15-point cushion, 52-37, into the final quarter.

Miami pushed its lead as high as 18 in the last session and never let Georgia Tech get any closer than 12, en route to the 13-point triumph.

Mompremier led all players in both points and rebounds to compile her conference-leading 22nd double-double, including her 12th in 14 ACC outings. The Miami native, who added a season- and game-high four blocks, notched her sixth 20-point game and fifth 15-rebound showing of the season.

“We’re expanding her shot chart,” Meier said of Mompremier. “She used the back-to-the basket post-up when she showed up. She’s showing a lot of versatility. You have to move her around and she’s handling it really well.”

Sophomore guard Mykea Gray totaled 18 points in the win, finishing 7-of-9 from the floor and 3-of-4 from long range. Redshirt junior guard Laura Cornelius paced all players in both assists (eight) and steals (four), each tied for the second-most of her career.

Freshman guard Elizabeth Balogun led the Yellow Jackets with 15 points, but Miami held her to 1-of-8 shooting from beyond the arc. Freshman forward Elizabeth Dixon added 12 points for Georgia Tech.

The Hurricanes, who conceded just one fast-break point, led for 36 minutes and 10 seconds of action. They held Georgia Tech to just 34.8 percent shooting (23-of-66) on the night.

Prior to the game, Miami honored its two seniors in forward/center Emese Hof and forward Khaila Prather, the latter of whom is in her fifth year with the team.

“They elevated it; they brought class to this program,” Meier said of what the duo has meant to Miami. “As soon as we had them join us, I thought, ‘These are the kids I want to be around, whether they’re good basketball players or not.'”

MIAMI HURRICANES POSTGAME NOTES
– The Hurricanes improved to 16-14 in their all-time series with Georgia Tech, including 9-3 in the past 12 matchups and 5-1 in the last six.
– With the victory, Miami moved to 16-2 at the Watsco Center this season, tied for the fourth-most home wins in a season in program history and the sixth time it has reached 16, including the first since 2011-12.
– Mompremier (22) and Hof (nine) have now combined for 31 double-doubles across 26 of the team’s 30 games, while Cornelius has one to give Miami 32 as a team.
– Five Hurricanes have now combined for a total of 25 20-point outings across 23 of Miami’s 30 games this season.
– Along with Mompremier joining the 1,000-point club, Gray eclipsed 750 points at Miami, Hof moved past 175 blocked shots as a collegian and sophomore guard Endia Banks surpassed 350 points in her career.