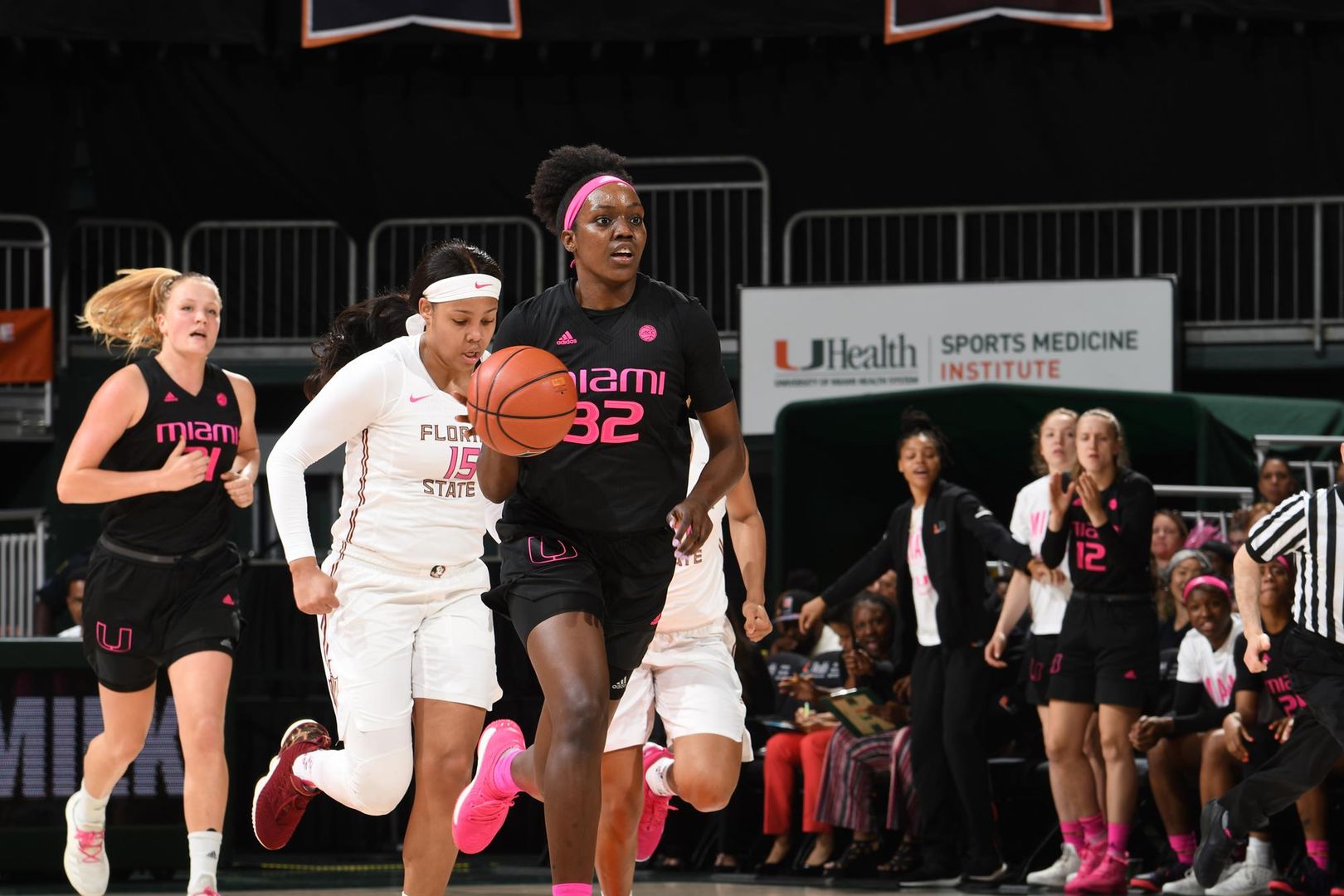 CORAL GABLES, Fla. – Déjà vu. For the second Sunday in a row, the University of Miami women’s basketball team stormed back from a 14-point deficit to defeat a ranked opponent live on ESPN2.

Redshirt junior forward Beatrice Mompremier tallied 18 points and 10 rebounds to help the Hurricanes move to 6-1 against ranked opponents this season and avenge their only such defeat.

“We were very business-like and very focused,” Miami head coach Katie Meier said of the win. “We were a tough team today—very tough—because Florida State is a great, great squad.”

The Seminoles hit back-to-back 3-pointers to open the second quarter, but Miami countered with a 15-0 run and held Florida State without a point for a span of 6:53 to take a 23-22 lead. Ultimately, the Hurricanes stretched their run to 22-4 and took a 30-26 lead into the locker room.

“Yeah, I think that 3-pointer [sophomore guard Mykea Gray hit to begin the run] was huge and it opened up a lot for us,” Meier said of Miami’s second-period response. “We had to adjust our concepts on offense to open up. Our guards had to work a lot harder and kind of chase. That was important, [as was] the posts being patient because we wanted to dominate the game in the paint. Florida State wasn’t letting us. so our posts just had to be patient.”

Mompremier tallied 10 points and seven rebounds in the first half, pacing all players in the former and co-leading the way in the latter.

Both teams logged 13 points in a low-scoring third period and the Hurricanes’ edge held steady at four, 43-39, with 10 minutes to play.

Miami scored the first 10 points of the fourth quarter to take a 14-point lead, 53-39, with 7:08 left in the game. The Seminoles trimmed the deficit to four, 58-54, with 1:54 to play, but Miami closed the game on a 6-0 run, including a shot clock-beating 3-pointer by redshirt junior guard Laura Cornelius with 47 seconds left to ice the game.

While Mompremier compiled her ACC-best 21st double-double of the year, Gray paced the Hurricanes with 19 points, including 11 in the second half. She added four assists and a career-high-tying four steals, while finishing 7-of-9 from the line.

Senior forward/center Emese Hof totaled 14 points and eight rebounds in the win, while Cornelius posted 10 points and six rebounds in a career-high-tying 37 minutes. She made three 3-pointers to reach 136 in her career, good for top-10 on Miami’s all-time list.

Junior guard Nausia Woolfolk led all scorers with 20 points for the Seminoles. The only other Florida State player in double figures was junior guard Nicki Ekhomu, who logged 12. Redshirt junior forward Kiah Gillespie tallied nine points and a game-high 15 rebounds, but Miami held the Seminoles’ leading scorer to 4-of-10 shooting.

The Hurricanes doubled up Florida State in points off turnovers, 18-9, despite each team committing 14. Miami also had a 26-18 edge in points in the paint in front of the largest student turnout of the season (391).

“The students were great and our regular crowd was amped up because they had company. I think it really helped us a lot,” Meier said. “I really appreciate the efforts of the administration and even [Vice President of Student Affairs Dr.] Pat Whitely getting the students there. There were a ton of people making huge efforts—the marketing department, our administration—to make this a special day. We needed every ounce of energy.”

For the Seminoles, the 54-point output was third-lowest of the season, including their least in a road contest.

Up next for Miami is its final regular season home game of the season, Thursday at 7 p.m. against Georgia Tech. The contest, set to air live on RSN, will serve as the Hurricanes’ senior day.

MIAMI HURRICANES POSTGAME NOTES
– The Hurricanes moved to 15-45 in their all-time series with Florida State, which dates back to the 1974-75 campaign, defeating the Seminoles at home for the first time since Feb. 19, 2012 and for the first time in the regular season since Feb. 16, 2014.
– Mompremier now has 326 rebounds in 28 outings thus far in 2018-19, already good for fifth place on Miami’s single-season leaderboard.
– The Hurricanes are now 15-2 at home this season, good for the fifth-most victories in program history and their most since going 15-3 in 2014-15.
– Mompremier (21) and Hof (nine) have combined for an NCAA-leading 30 double-doubles across 25 of the team’s 29 contests this season, while Cornelius has one of her own to give the Hurricanes 31 as a team.
– Hof surpassed 1,150 points at Miami, Mompremier eclipsed 350 free-throw attempts as a collegian, sophomore guard Kelsey Marshall moved past 50 steals in her career and sophomore guard Endia Banks reached 50 steals as a Hurricane.