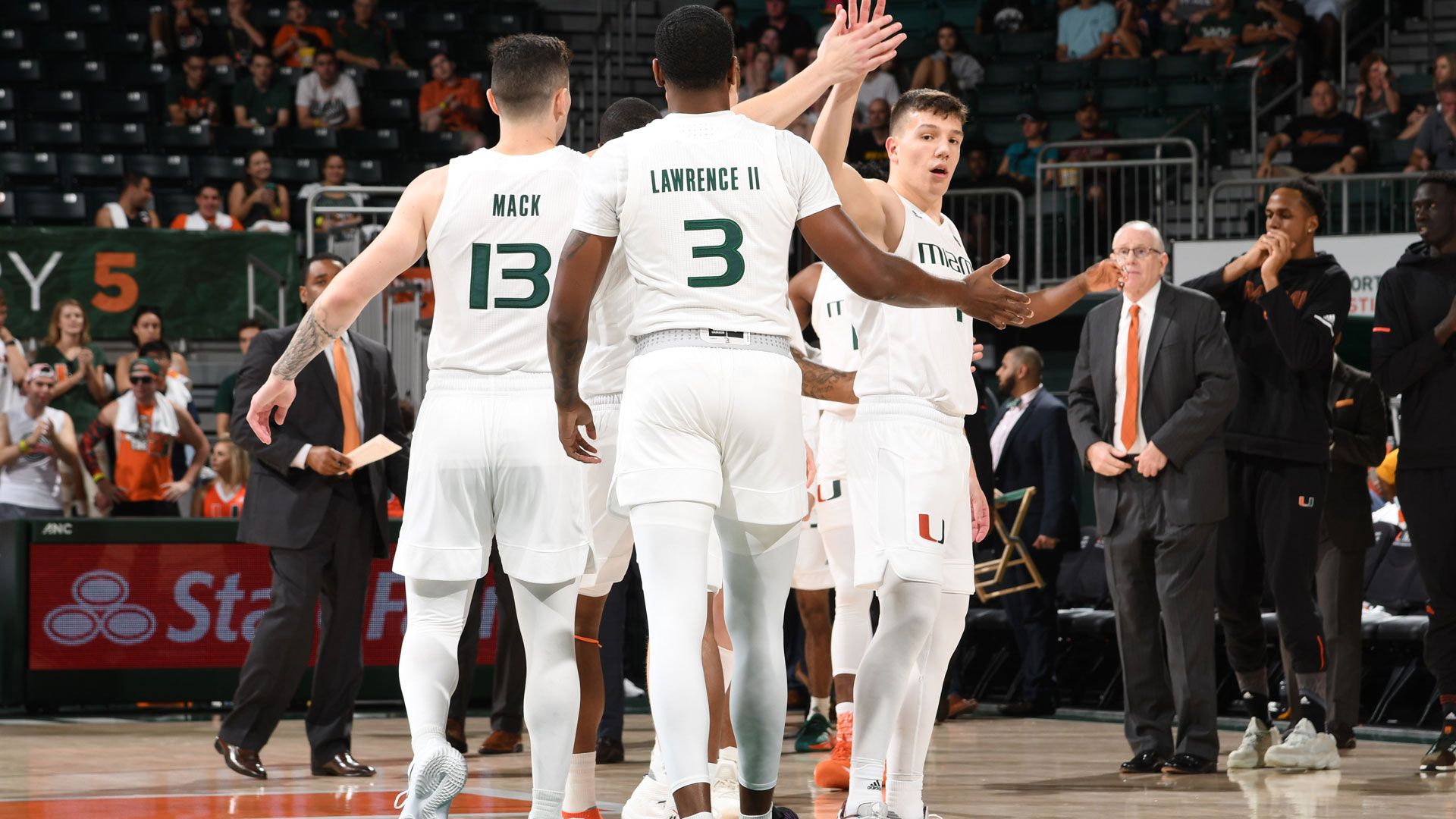 CORAL GABLES, Fla. – Jumping out to an early lead, the University of Miami men’s basketball team did not trail as it cruised to an 80-65 victory over Georgia Tech Saturday afternoon at the Wastco Center.

The Hurricanes opened Saturday’s contest firing on all cylinders, shooting 12-of-19 (63.2 percent) through the opening 12 minutes of action, including 8-of-11 (72.7 percent) from inside the arc and 50 percent on eight 3-point attempts. During the stretch, the Hurricanes took their largest lead of the stanza, 30-13.

The Hurricanes closed out the opening half making key plays on both ends of the court, capped by a buzzer-beating 3-pointer from Lawrence II to enter the locker room with a 39-23 advantage. The 23 points tied for the lowest point total allowed by the Hurricanes in a half this season.

Overall, the Hurricanes swiped away six steals and shot 8-of-9 (88.9 percent) from the charity stripe in the half, while Lawrence led the Canes with 11 points and six rebounds and Izundu shot 4-of-4 from the field to close out the half with eight points and five rebounds.

Up next, the Hurricanes will travel to Winston-Salem, N.C., playing at Wake Forest Tuesday at 7 p.m. The ACC’s Regional Sports Networks, including FOX Sports South and FOX Sports Sun, have the broadcast.

Game Notes
• Miami finished with 20 assists, by far its most in ACC play this season.
• Miami had assists on each of its first 10 field goals. The Canes recorded assists on 12 of their 13 first-half field goals.
• Miami out-rebounded Georgia Tech, 35-33, and is 7-3 this season when out-rebounding its opponent. (2-2 ACC)
• Georgia Tech’s 23 points matched an opponent season low for points in a half.
• Miami’s 80-point output was the most allowed by Georgia Tech in ACC play this season.
• Anthony Lawrence II fell an assist shy of the fourth triple-double in program history but recorded his fifth career double-double (third this season and fourth career in ACC play). He racked up a career-high nine assists to go along with 16 points and 10 assists.
• Playing in his 124th career game (ninth in program history), Lawrence now has 952 career points.
• DJ Vasiljevic scored 21 points, one off his career high, set on Feb. 13 against Clemson. He hit five 3-pointers, also one off his career high.
• Chris Lykes scored 11 points and has reached double figures in 23 of 26 games this season.
• Ebuka Izundu scored 18 points, his career high in an ACC game.
• Zach Johnson scored two points and has recorded 1,662 career points (1,344 at Florida Gulf Coast, 318 at Miami).

Miami Head Coach Jim Larrañaga
Opening statement:
“Very, very pleased with the victory. Great defense in the first half, holding Georgia Tech to 23 points and scoring 39 ourselves. Guys really shared the ball in the first half. Second half, our defense the first six or seven minutes was not very good and gave them a chance to get back in it, but fortunately we played a lot better in the last 13 minutes and were able to come away with a terrific victory. Anthony Lawrence was one assist away from a triple-double and had a great all-around game. But a lot of guys contributed today.”

On team’s assist-to-turnover ratio:
“We are constantly preaching to the guys if we get 16 assists or more, we’re going to win that game because it means we’re sharing it [the ball] and making shots. Today we had 20 assists and only 11 turnovers, and 11 is really our goal. So 11 or less is terrific. Anything over 11 is not so satisfactory.”

On Anthony Lawrence:
“I actually called him into my office yesterday and told him this is another Carolina situation. When we played Carolina, there were certain matchups I think that work very much in his favor, and because of Georgia Tech’s defense, we told Anthony Lawrence he was going to play a lot of point guard today. And the reason is Georgia Tech plays a zone that has a lot of…their defensive emphasis is on playing the passing lanes. So, if you’re a smaller guard, they’re challenging your pass, not so much your shot. So, if you’re a bigger guard like Amp is, you have a better chance of throwing it over the zone.  And that’s basically what he did. He was able to find the open man because he could see over the top of the zone.”

On Ebuka Izundu:
“Yes, 18 points and nine rebounds, very close to a double-double and a very good all-around game. Our only concern is always with Ebuka is foul trouble. He got into a little bit of foul trouble. He ends up playing 21 minutes instead of 27 or 28. But we got a nice contribution from Anthony Mack today, 2-of-2 from the field. He made a three. Five points in 14 minutes, and good balance with Sam Waardenburg coming in off the bench. We got good support from our bench.”

On DJ Vasiljevic getting hot in the second half:
“I think he had some good looks in the first half that he just missed. He actually missed a very good look in the second half right at the elbow. We ran a play for him and he missed a wide open shot. But overall when you’re able to go 7-of-15, 5-of-11 from three, 2-of-2 from the foul line, 21 points in 32 minutes, that’s a very nice afternoon.”

On team’s play the last five games:
“I thought at Boston College we just did not have the energy. The practice before we left was not very sharp. Our execution during the game and our shot making during the game was not very good. But the other four games in the second round of games, Notre Dame, North Carolina, Clemson, and today, Georgia Tech, I think we’ve played about as well as we can play.”

Georgia Tech Head Coach Josh Pastner
Opening Statement:
“Give Coach Larranaga and his staff credit. They played excellent and are a really good basketball team. Obviously very well coached and they have some very good players. I thought we did a great job on Chris Lykes, which is not an easy thing to do. I thought the MVPs of the game for Miami were No. 1 (Vasiljevic) and No. 15 (Izundu). Those two guys were the MVPs. They played at a high, high level. Got to give Miami full credit. Obviously Coach Larranaga and his staff did a great job and I think they’re a really good basketball team and well coached as well.”

On whether Vasiljevic and Izundu did anything different than they expected:
“We probably spent so much time focusing on Chris Lykes and probably didn’t spend enough time on No. 1 and No. 15. No. 1 hit some tough threes. He is a good shooter, he hurt us here the first time we played them and he hurt us again this year.”

On Miami handling the Georgia Tech zone defense:
“I thought they [Miami] ran good stuff. I didn’t think our energy the first half (was good). For our zone to work you’ve got to be second effort, third effort, fourth effort, it is continuous, multiple effort, flying around. We weren’t flying around today like we have been. I was disappointed with our energy level in the first half.

“Michael DeVoe has to be better. He can’t have zero rebounds. I’m a big believer in guard rebounding. The reason he wasn’t good today was strictly because, you look at his guard rebounding, and he doesn’t get any guard rebounds. He didn’t get any defensive rebounds. He and James [Banks] have to better for us. And for that zone to work, you have to be flying around. You have to be second, third, fourth effort and I didn’t think we had that in the first half and then we just obviously played man the rest of the way.”

On decision to switch to man-to-man defense after typically playing zone:
“I just didn’t like our energy. I ended up going man because I didn’t like our energy in the zone. The zone won’t work if you are not second effort, third effort, fourth effort, just continuous and multiple effort. We were a poor energy team in the first half. If we are a poor energy team, we are going to struggle. We have to be all about energy. That’s who were are. It’s our only way of survival, it’s our DNA. Today in those first 20 minutes, it wasn’t good.”

On Jose Alvarado:
“Jose played really well. Obviously he was in a slump, but he’s had three games now where he’s back to the old Jose. So that’s good for us. We just need Jose and Mike (Devoe) to play well together at the same time. If we can get that, we’d be a really good team.”

Anthony Lawrence II, Guard, Senior
On Coach Larranaga wanting him to play more of point guard role facing the Georgia Tech zone, and what the matchup opened up for him…
“The defense they play is like a zone. So, sometimes the corners are open. With Chris [Lykes] being so, like, small, I’m able to throw the ball over the defense and make an easier pass to the corner. I made a couple passes to DJ [Vasiljevic] in the corner. That was basically what [Coach L] told me.”

On how much he wanted to tack on one more assist for a triple double…
“Yeah, I really wanted to get that triple double. I wasn’t able to, but we got a good team win and I’m happy.”

On the team’s fight through the last five games…
“We fight. All the adversity we went through this year with Dewan [Hernandez] being out, all the injuries we had, we have never given up. We fight every game and we try not to make that an excuse.”

Dejan Vaslijevic, Guard, Junior
On the team’s fight through the last five games…
“I think it starts with practice. We are having a lot of fun in practice and as you can see, it is translating to the games. The last couple of games. We are just having fun and we are just playing for one another.  We’ve only got seven guys. So, we have nothing to lose and we are just going out there and fighting.”

On the last five games and if he is seeing a different Miami team competing in ACCs…
“Yeah, definitely. We are playing really hard defensively, giving a lot of effort. Our offense is clicking at the right time. We are sharing the ball and getting inside and outside looks. It’s really clicking right now.”

On the upcoming two road games and the importance of keeping this momentum going…
“I mean, it is very important. Coach L has never won at Wake Forest since he has been here. So, taking tomorrow off, we are going to watch some film; that’s mental preparation, and Monday come out as a team physically in practice. And just do what we do best, play hard and try to get the win at Wake Forest.”