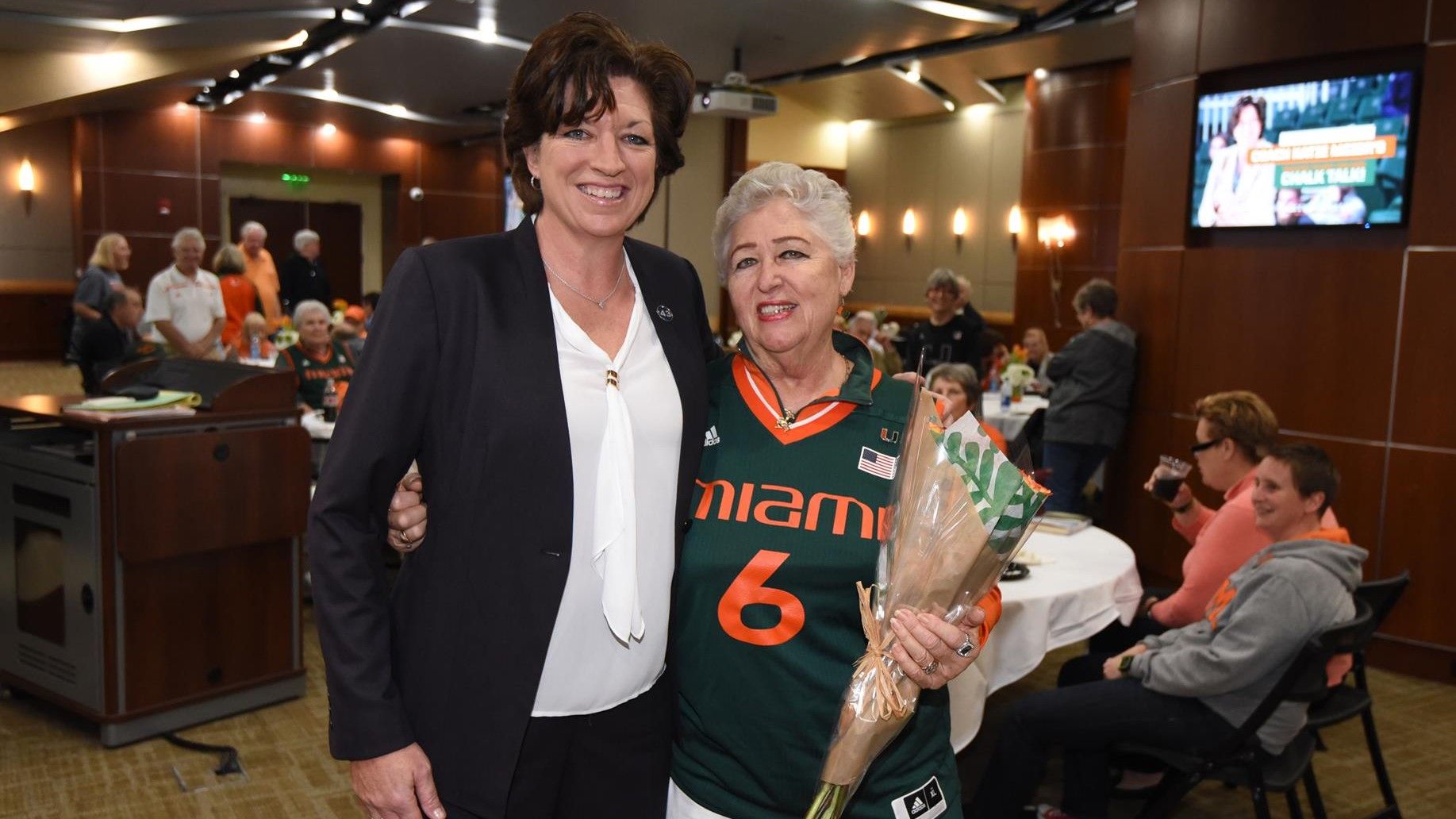 CORAL GABLES, Fla. – The University of Miami announced Monday the largest gift commitment in the history of the women’s basketball program.

BJ Abolt has pledged a seven-figure estate gift to establish a women’s basketball scholarship endowment. Named after head coach Katie Meier at Abolt’s request, it will be the first fully-endowed women’s athletics scholarship at Miami.

“Katie Meier is the most dynamic person I have ever met,” Abolt said. “It is a privilege to be a part of a young woman’s scholastic and athletic dreams, and an honor to be associated with Coach Meier’s program.”

A member of the Golden Cane Society for over two decades, Abolt is a leadership donor to the Building Women’s Champions Campaign. The Boswell, Ind., native moved to South Florida in 1963 and has been a supporter of Miami Athletics ever since.

Abolt and her longtime friend, Willie Mae Lamar, attend all women’s basketball home games, driving six hours round-trip from their LaBelle, Fla., home. They also travel around the country to support the team during both the regular season and postseason.

“I’m honored, humbled and stunned by this gift,” Meier said. “Our program’s relationship with BJ is very personal and a gift like this feels like family. We could not feel more loved, supported and grateful. The impact of this gift will enhance our women’s basketball program into perpetuity.”

In Meier’s 14 years at the helm of the Hurricanes, she has compiled a stellar 273-168 mark and led the team to its first ACC regular season title. Miami has reached the postseason the past nine years, making the NCAA Tournament in seven of the last eight. In addition, the Hurricanes hit the 20-win mark this season for the ninth time in 10 years.

“This is a truly transformational gift for our women’s basketball program that will positively impact the lives of so many young women for years to come,” Director of Athletics Blake James said. “We are extremely grateful to BJ for her generosity and support. It is because of people like BJ that we are able to provide our student-athletes with such exceptional experiences in our quest to build champions at The U.”

The Katie Meier Women’s Basketball Scholarship Endowment, once established, will provide annual funding in perpetuity for a full scholarship for one member of the team.

Gifts to the women’s basketball program can be made online at www.buildingwomenchampions.com or by contacting Alfonso Restrepo in the Hurricane Club at fonzi@miami.edu.