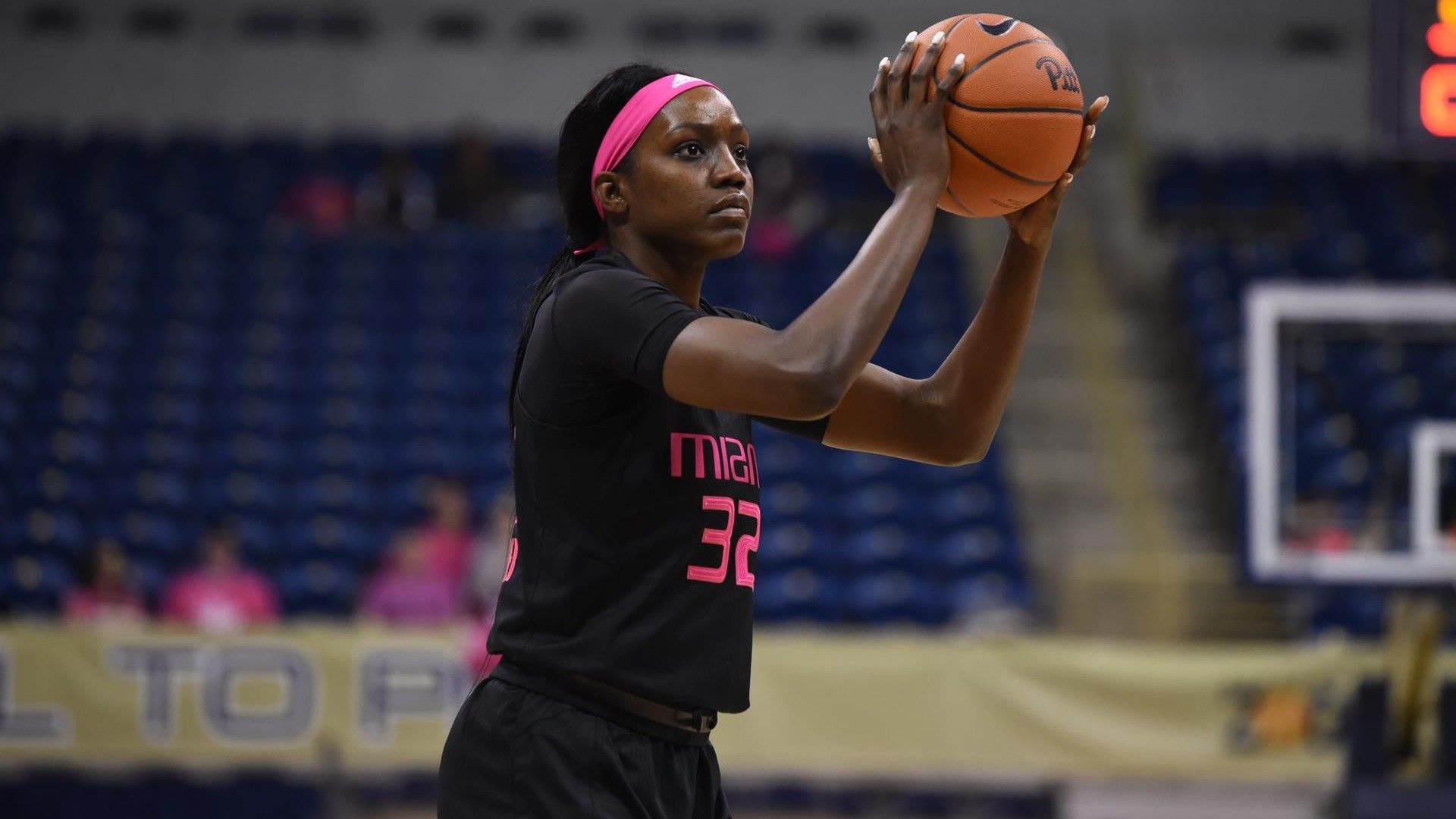 WBB Dominates on Defense in 65-51 Win at Pittsburgh

PITTSBURGH – The University of Miami women’s basketball team turned in a stellar showing on the road Sunday afternoon, registering a 65-51 victory over Pittsburgh.

Behind tremendous defense from start to finish and redshirt junior forward Beatrice Mompremier’s ACC-leading 19th double-double of the year, No. 25 Miami (21-5, 9-2 ACC) never trailed at the Petersen Events Center

“We did not shoot the ball that well. We had these percentages and sometimes that is going to happen,” Miami head coach Katie Meier said. “That second quarter, as good as our defense was, our offense was anemic, but that’s when your defense holds. That second quarter was really frightening and almost reminded me of Colorado last year. Our defense can hold and that’s sometimes how you win on the road.”

Miami held the Panthers scoreless for over nine consecutive minutes in the second quarter, not allowing a point until a pair of made free throws by junior guard Jasmine Whitney with 52.1 seconds on the clock. Those were the lone points for Pittsburgh in the frame, as the Hurricanes did not allow a single field goal and took a 32-20 lead into the break.

The two points Miami conceded in the second period tied for the fewest it has allowed in a quarter since the NCAA went to four sessions in 2015-16, joining the second quarters against Bethune Cookman on Dec. 28, 2017 and Duke on Feb. 7, 2016, as well as the third versus Coppin State on Dec. 19, 2016.

Overall, the Hurricanes held Pittsburgh to 25.0 percent (7-of-28) shooting in the opening 20 minutes. It tied for the lowest opponent field goal percentage in a first half this season and third-lowest in a half overall. In addition, the Panthers became the second Miami foe to make zero 3-pointers in a half this year.

“In the first quarter, we were too soft. We really challenged Beatrice because [Danielle] Garven had a nice game plan. They were trying to establish Garven over Bea,” Meier said. “I think Bea really stepped up in that second quarter. She took it personally and that was great to see. I was very scared about their 3-point shooting, so we spent a lot of time on how guard their shooters and their specific scout and that absolutely showed up.”

A basket by Pittsburgh early in the third frame ended a span of 10 minutes and 50 seconds without a field goal. Although the Panthers improved offensively in the frame, Miami did so as well and upped its lead to 19 multiple times. The edge sat at just that, 54-35, with one session remaining.

Miami stretched its cushion as high as 20 in the final frame and did not let it drop below 15 until the last 90 seconds, en route to the 14-point decision.

“I thought Beatrice, overall, played a very mature, composed game,” Meier said. “They were coming at her at all different angles and trying to double our bigs. Our bigs really handled the ball . . . [and I also] really thought she shared the ball.”

Emese Hof posted her third double-double in a row and ninth of the season, giving Miami back-to-back games with two players achieving the feat. The senior forward/center tallied 11 points, 11 rebounds, four blocks and four assists, the latter tying her mark at Pittsburgh two years ago for her most in an ACC game. Meanwhile sophomore guard Endia Banks tied a season high with eight rebounds.

Garven, a senior forward, was the lone Panther to tally double-digit points, posting 13 after going 4-of-12 from the field and 5-of-12 at the stripe. Her 12 free-throw attempts were the most by a Miami opponent since Notre Dame’s Arike Ogunbowale logged 13 on Jan. 4, 2018.

The Hurricanes, who matched their win total from the 2017-18 season with Sunday’s triumph, logged a 49-38 edge on the glass to tie their highest rebound total in ACC play this season. Miami outscored the Panthers by 12 in the paint, 30-18, and the 51 points conceded were its fourth-lowest total allowed this season.

Following a midweek bye, Miami resumes play in Louisville, Ky., next Sunday at 3 p.m. against second-ranked Louisville, live on ESPN2.

MIAMI HURRICANES POSTGAME NOTES
– Miami improved to 22-9 all-time against Pittsburgh, good for its third-most wins over any foe, after winning its 10th game in the last 11 meetings and fifth in a row.
– Pittsburgh’s 25.0 percent clip in the first half tied FIU (11/6/18) for the lowest mark before the break by a Miami foe this year and trailed only the second half percentages by FIU (17.2 percent) and New Orleans (17.9 percent, 12/9/18).
– Mompremier (19) and Hof (nine) have combined for 28 double-doubles across 20 of Miami’s 16 outings, the most by an ACC duo, while redshirt junior guard Laura Cornelius has one of her own to give the Hurricanes 29 as a team.
– Five different Hurricanes have combined for a total of 22 20-point performances across 20 of the team’s 26 games.
– Mompremier eclipsed 950 points as a collegian and Hof surpassed both 1,100 points and 2,500 minutes played at Miami.