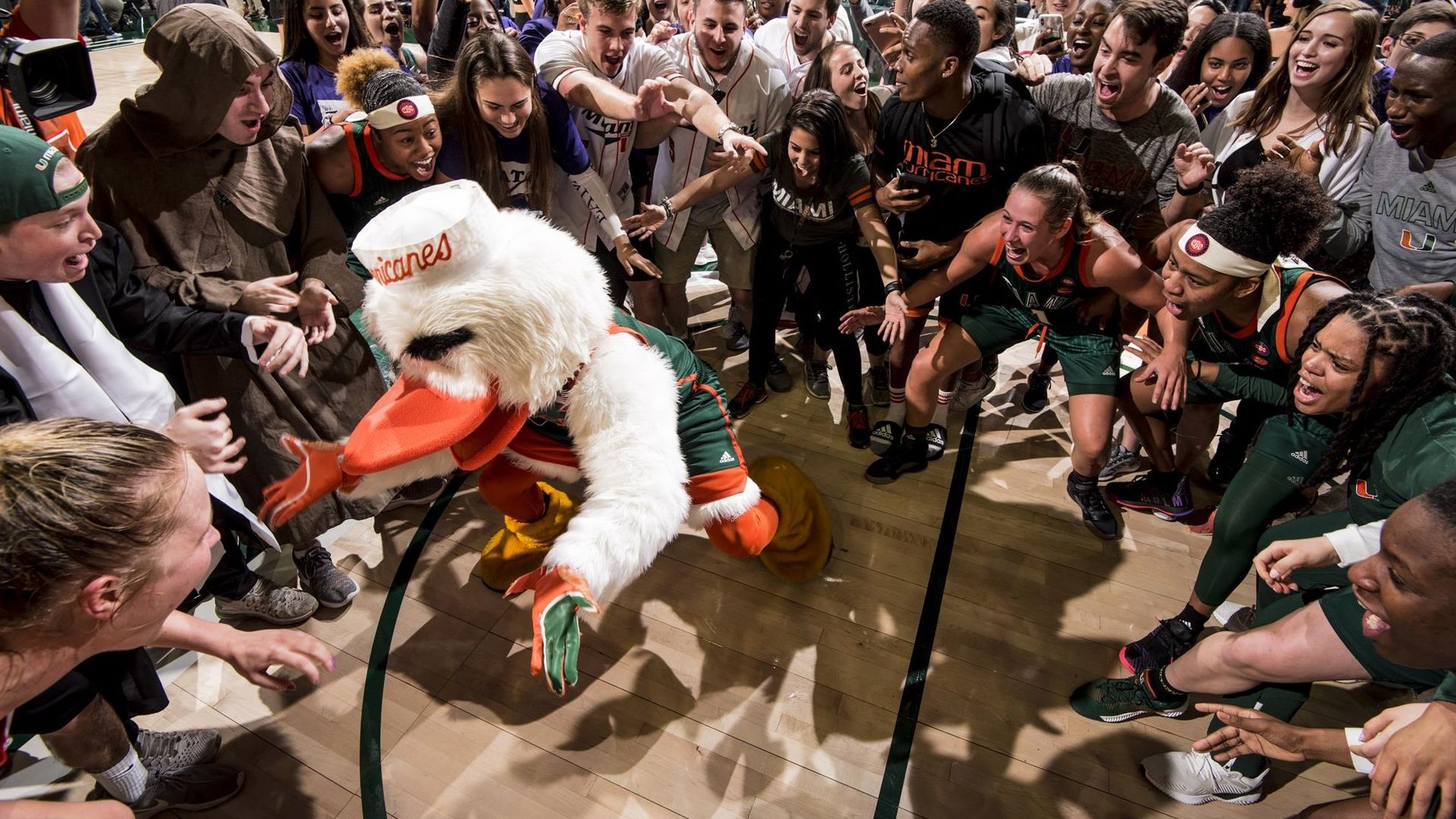 CORAL GABLES, Fla. – For the second time in its last three chances on its home court, the University of Miami women’s basketball team knocked off national powerhouse Notre Dame, notching a 72-65 win Thursday night at the Watsco Center.

As was the case in 2015 when the Hurricanes handed the Fighting Irish their first-ever loss in ACC play, Notre Dame (21-3, 8-2 ACC) was ranked fourth in the nation. This time, though, it was also the reigning national champion, giving No. 25 Miami (20-5, 8-2 ACC) its first victory over such a foe.

The Hurricanes led for over 32 minutes to become the first team with multiple victories over Notre Dame in league play since the Fighting Irish joined the ACC in 2013-14.

“I felt really good about it going in. I told them in the locker room before the game and at halftime, do not be surprised when you win this basketball game,” Miami head coach Katie Meier said. “We are capable, we are a great matchup. Control what you can control, which is take care of the ball and don’t take vulnerable shots—take shots that we can defend or we can rebound. That’s it. You’ve got to do that and then you’re taking 20 points off of Notre Dame’s board. That’s exactly what they did.”

The Hurricanes made nine of their first 13 shots, but missed their final three of the opening period and Notre Dame senior guard Marina Mabrey hit a buzzer-beating 3-pointer to even the score at 22 through 10 minutes.

After a back-and-forth second quarter, redshirt junior forward Beatrice Mompremier made a putback basket to beat the buzzer and give Miami a 36-34 lead entering the locker room. It marked just the fifth time in 2018-19 the Fighting Irish have trailed at the break, including the second in ACC play.

Mompremier logged 10 points and six rebounds in the first half, while senior forward/center Emese Hof posted 12 points on 6-of-7 shooting to go along with five rebounds.

Miami stretched its lead as high as six multiple times during a third session in which sophomore guard Taylor Mason connected on two 3-pointers after not previously having multiple makes from long range in a full game. The Hurricanes took a narrow 54-52 advantage into the fourth frame, marking only the fourth time Notre Dame has trailed with 10 minutes to go this year, including the second in ACC action.

“I felt in control most of the game. I just felt like our team was taking care of things and doing what they needed to do,” Meier said. “The play of Taylor Mason just had my confidence through the roof. What a performance by Taylor. It was incredible.”

The Fighting Irish trimmed their deficit to two, 65-63, on a 3-pointer by senior guard Arike Ogunbowale, the ACC Preseason Player of the Year, with 1:16 to go. However, Miami closed strong by scoring seven of the final nine points over the last 44 seconds and did not allow the five-time reigning ACC regular season champions to make another field goal.

Hof, in a co-career-high 36 minutes, led all scorers with 21 points on 9-of-15 shooting and paced the Hurricanes with 13 rebounds, logging her eighth 20-point outing and eighth double-double of the season. She also recorded four blocked shots to pass Kym Hope for sole possession of second place on Miami’s career list with 165.

Mompremier finished with her 18th double-double of the year, tallying 18 points and 12 rebounds to give the Hurricanes multiple double-doubles in a game for the fifth time in 2018-19. Mason registered a career-high 13 points in the victory, all in the second half.

Miami, which had multiple double-doubles in a game for the fifth time this season, became the first team with two double-digit rebounders against Notre Dame since Cal State Northridge on March 16, 2018. That game, in the NCAA Tournament Round of 64, was also the last time the Fighting Irish conceded two double-doubles.

“It’s a significant game. I’m really excited to win it,” Meier said. “It means a lot I think in terms of recognition. I like the validation of the fact that we think we’re good and when we play sharp and focused we’re very good. A lot of us feel like, ‘Why don’t we play like that every night?’ That’s going to be the message.”

Senior forward Jessica Shepard logged 17 points and 17 rebounds for the Fighting Irish, notching the most boards by a Miami opponent since Maya Singleton of St. John’s had 17 on Dec. 3, 2017. Mabrey, whom the Hurricanes held to four points after the first period, finished with 14 points, as did junior guard Jackie Young.

Miami finished with a 13-2 edge in bench scoring and a 46-37 advantage on the glass. The Hurricanes held Notre Dame to their lowest point total of the season and the least points in a loss since tallying 62 at NC State on Dec. 29, 2016.

In addition, Miami limited Notre Dame to just 22-of-59 shooting, with the 37.3 percent clip the lowest for the Fighting Irish since posting a 35.9 mark Nov. 17, 2016 versus Green Bay. Thursday was also the first time in 2018-19 Notre Dame did not lead at the end of any quarter.

“Well, we have great size on our team. On the ball screen schemes, we tried to take away a lot of their vision,” Meier said of Miami’s defensive success. “Emese and Beatrice did a really nice job of giving support to our guards off of ball screens and that was a really big deal.”

With Thursday’s win, Miami joins UConn (eight), Louisville (two) and Stanford (two) as the lone teams to defeat Notre Dame multiple times since the start of the 2012-13 season. This is the second AP top-four win in Miami program history, with the other the aforementioned ACC triumph over the Fighting Irish.

The Hurricanes, who reached 20 wins for the ninth time in the past 10 seasons, will be back in action Sunday in Pittsburgh when they play their first of three straight road games at 1 p.m. against Pittsburgh.

MIAMI HURRICANES POSTGAME NOTES
– Miami improved to 5-19 in its all-time series with the Fighting Irish, including 2-6 since Notre Dame joined the ACC for the 2013-14 season.
– Thursday marked the first time since Jan. 10, 2007 that Miami played the reigning national champion and the Hurricanes moved to 1-7 in such games, including 1-5 at home.
– Mompremier and Hof have a combined for 26 double-doubles this season, the most of any ACC duo, while Cornelius has one of her own to give Miami 27 as a team.
– Five different Hurricanes have combined for 21 20-point outings across 19 of the team’s 25 games this season, with Hof’s eight leading the way.
– Mompremier reached 125 blocks in her career, Cornelius moved past 250 rebounds and reached 100 made free throws as a Hurricane, Gray eclipsed both 1,500 minutes played and 200 free-throw attempts at Miami, Mason reached 100 rebounds and surpassed 50 made field goals as a collegian, while Hof moved past 450 made field goals in her career.