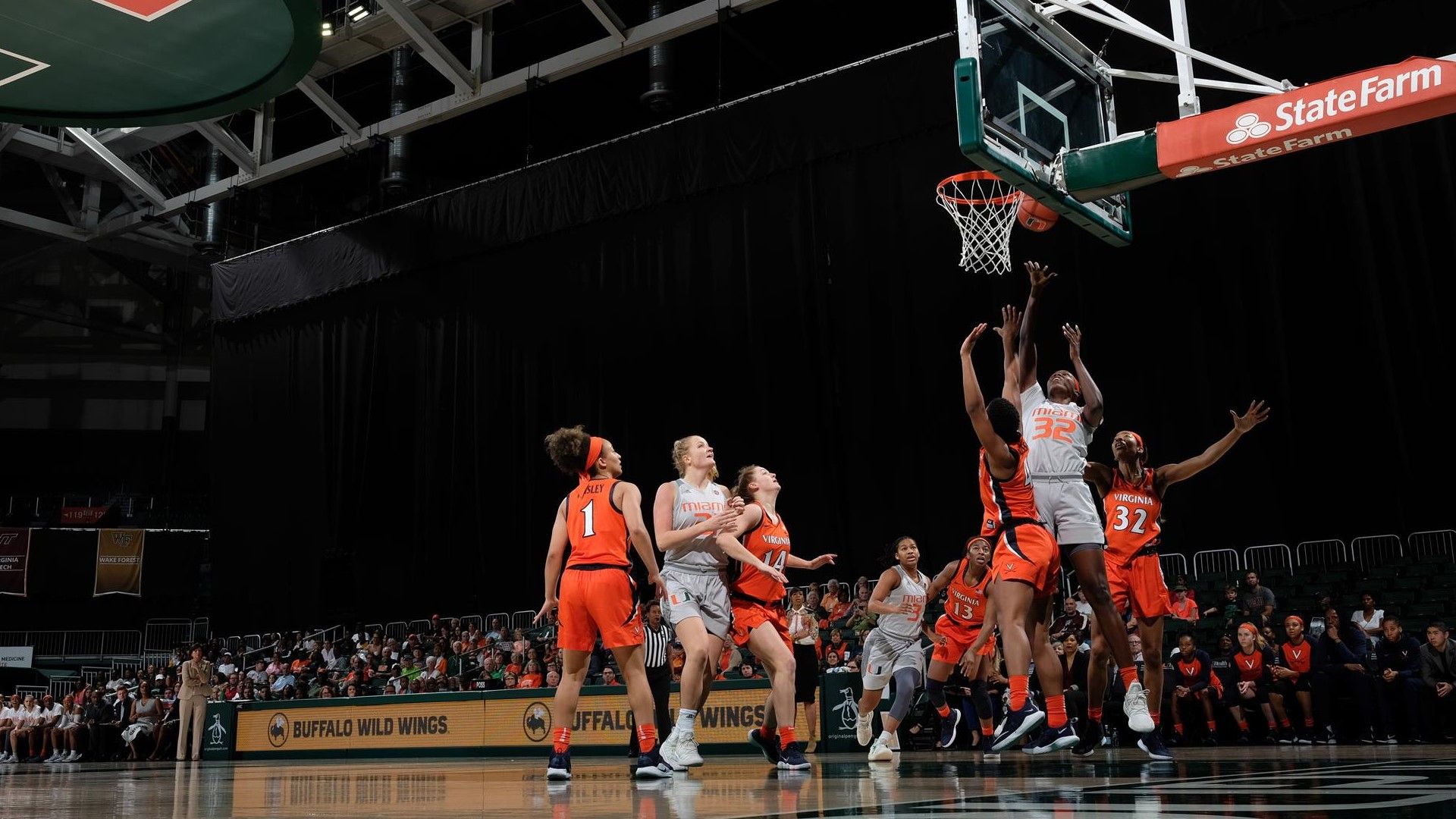 “I love the way we started the game. We looked like a top-20, top-10 type of team at the beginning of the game,” Miami head coach Katie Meier said. “Virginia probably watched our Florida State game and thought, ‘Well they’re not very good.’ We didn’t look all that good against Florida State. It was nice to just have a good demeanor. We had a lot of pride and a lot of pace to our play. We didn’t pout about mistakes and I loved our pace today.”

A three-point play from sophomore guard Mykea Gray just four seconds into the contest set the tone immediately for the Hurricanes. That jumpstarted a 13-2 opening for Miami in the first 2:41 of the game. The Hurricanes stretched their cushion to 12 points, 22-10, by the end of the first frame.

After a low-scoring second period that featured 10 points both ways, Miami’s edge remained a dozen, 34-22, at the intermission. Sophomore guard Kelsey Marshall tallied 11 points in the opening half, surpassing her prior high for a full game in ACC play this season.

The Hurricanes extended their advantage as high as 18 points during a third quarter in which Mompremier tallied 14 points and six rebounds. The Miami native made all six of her field goals and both of her free throws in the session and the Hurricanes led, 53-37, headed into the fourth quarter.

Miami pushed its edge up to 22 in the fourth quarter and the 13-point final margin came after a 6-0 run by the Cavaliers to close the game.

Along with matching her career high in points by tallying her fourth 20-point game of the season and first in ACC play, Mompremier set a career best in made field goals. In the second half alone, she notched 18 points and went 8-of-10 from the floor.

Senior forward/center Emese Hof finished with 18 points and a game-high 13 rebounds, the latter a new career best in ACC play and her most this season. The double-double was the 12th of her career, including her seventh this year.

Meanwhile, Marshall registered a season-high-tying 17 points and made all five of her field goals, each from beyond the arc. The five makes set a career high and her 5-of-5 clip from 3-point range tied Shenise Johnson for third on the program’s single-game percentage list, behind only redshirt junior guard Laura Cornelius’ two 6-of-6 outings. The Davie, Fla., native also became the first ACC player to make five shots from deep in a game without a miss this season.

“We went to them a little bit early. I thought we established them and then we lost them in the second quarter,” Meier said of Mompremier and Hof. “We went into halftime very frank and very honest with the entire team, [telling them those two] deserve the ball, they’re demanding the ball. We were over-trying and staring at them too much. There has to be some faith in the offense and you have to reverse the ball. If you have double bigs like we’re blessed to have, you’re not going to get looks in the first five seconds. For Kelsey to open it up and hit some threes was huge for us.”

Junior guard/forward Jocelyn Willoughby was the lone Cavalier to tally double-digit points, posting 16 on 6-of-16 shooting.

Next up for the Hurricanes is a matchup with the reigning national champion, fifth-ranked Notre Dame, Thursday night at 7 p.m. at the Watsco Center.

MIAMI HURRICANES POSTGAME NOTES
– Miami improved to 10-9 in its all-time series against Virginia, taking the lead for the first time after winning nine of the last 11 meetings, including six of the past seven and three in a row.
– With the victory over the Cavaliers, the Hurricanes now hold the upper hand in the all-time series against nine of their fellow 14 ACC schools.
– Hof (seven) and Mompremier (17) upped their lead among ACC duos with 24 combined double-doubles this season, while redshirt junior guard Laura Cornelius has one of her own, giving Miami a total of 25 this season.
– Five different Hurricanes have combined for a total of 20 20-point outings across 18 of the team’s 24 games thus far.
– Gray reached 150 made free throws in her career, Marshall eclipsed both 450 points and 100 made 3-pointers at Miami, Mompremier surpassed 900 points as a collegian and Cornelius moved past 2,250 minutes played as a Hurricane.