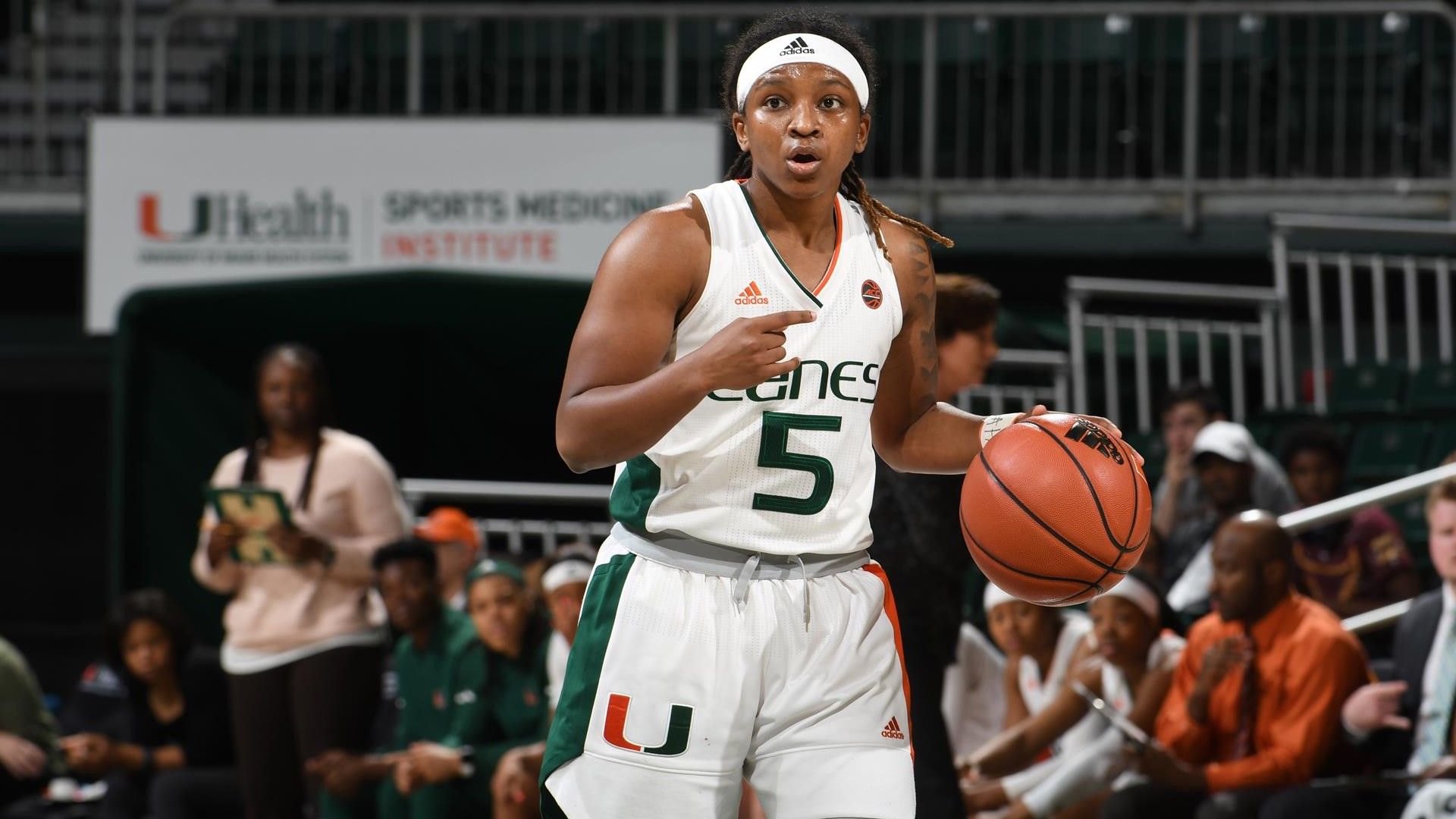 “The crowd at Miami helped us win a basketball game today,” Miami head coach Katie Meier said of the atmosphere down the stretch. “That is a big moment for me and . . . the team needed it, we needed that support. We need to be uplifted a little bit.”

Both teams scored 22 points in the first quarter, with Miami getting 14 points from 3-point range and at the line and Boston College (13-7, 2-5 ACC) tallying 16 inside the arc.

The Hurricanes scored the first seven points of the second period, en route to an 11-3 run over the opening 2:08 to build a 33-25 lead. The Eagles, however, scored 19 of the final 28 points of the frame and took a 44-42 advantage into the locker room.

Miami shot 20-of-24 (83.3 percent) from the free-throw line in the opening 20 minutes, setting season highs for makes and attempts in a half, while a 12-of-13 ledger in the second period set record for makes in a first-half quarter. Boston College also excelled at the stripe, posting a 10-of-11 (90.9 percent) clip through one half.

The Hurricanes did not allow a point the rest of the way, though, and connected on four of their six free throws in the closing 28 seconds to earn the win. The decisive two came from Gray, the shortest player on the court, after she grabbed an offensive board and got fouled going up.

“The questions they were asking in the huddle,” Meier said of what she liked most about her team in the closing minutes. “You know you got your team locked in when I’m calling up a play and they were like, ‘Okay but do you want the pinch? Do you want the kick-over three?’ or whatever [the question may be]. BC had a couple of steals and a couple of almost-steals that would’ve changed the game. They played tough.”

Redshirt junior forward Beatrice Mompremier logged her 16th double-double of the season, including the 11th in her past 12 outings and seventh in a row, with 16 points and a game-high 12 rebounds. She went 8-of-14 at the line, setting a career high in attempts and tying the most by an ACC players this season, as well as notching a season high in makes, one shy of her top career mark.

Redshirt junior guard Laura Cornelius also tallied 16 points and finished 9-of-10 at the line, both career bests, in a career-high 37 minutes, while senior forward/center Emese Hof narrowly missed her seventh double-double of the season with 14 points and nine rebounds. Sophomore guard Endia Banks tied an ACC high with a season-best eight rebounds, including a key one on the defensive end with 15 seconds remaining.

Miami’s 34 made free throws were one shy of the program record and three more than any ACC team has connected on this season. Its 49 attempts were seven shy of the school record and 10 more than the prior top mark by an ACC program in 2018-19. The last time an ACC team had 34 makes was NC State on Jan. 17, 2016 and the last time an ACC school had at least 49 attempts was Georgia Tech with 51 on Nov. 24, 2015. Gray, who led the way from the stripe, tied her best career marks in both makes and attempts.

“I don’t usually point that out on the scout, but it really jumped off the page when I was prepping them,” Meier said of Boston College’s propensity to foul. “[Assistant coach Tia Jackson] was giving me the cuts and . . . it was something that we thought about, but you got to move the ball; you got to go north, south, east and west. It’s not like they just foul you. You’ve got to move it, attack and jump. So, when we played with pace I think we drew fouls. When we didn’t, we were shooting over them and that’s what they wanted us to do.”

MIAMI HURRICANES POSTGAME NOTES
– Miami, which has more victories over Boston College than all but two other teams, moved to 28-17 in the all-time series, including 11-1 in the past 12 matchups with five straight wins.
– Prior to Sunday, Miami’s top mark for made free throws in a half was 19 in the second at No. 13/14 Syracuse (1/23/19) and its top tally for attempts was 23 in the second at Wake Forest (1/6/19).
– Before Sunday, the Hurricanes’ high total for made free throws in a game was 25 at No. 13/14 Syracuse (1/23/19) and its best mark in attempts was 32 versus Florida A&M (12/28/18), numbers that Miami exceeded by two and eight, respectively, through just three quarters.
– Mompremier (16) and Hof (six) have combined for 22 double-doubles this season, the most by any ACC duo, and Cornelius has another of her own to five Miami 23 as a team, while five Hurricanes have combined for 19 20-point outings.
– Cornelius surpassed 650 points at Miami, Mompremier reached 50 steals as a collegian, Gray eclipsed both 650 points and 75 steals in her career while reaching 100 rebounds, Hof reached 1,050 points as a Hurricane and sophomore guard Taylor Mason reached 150 points at Miami.