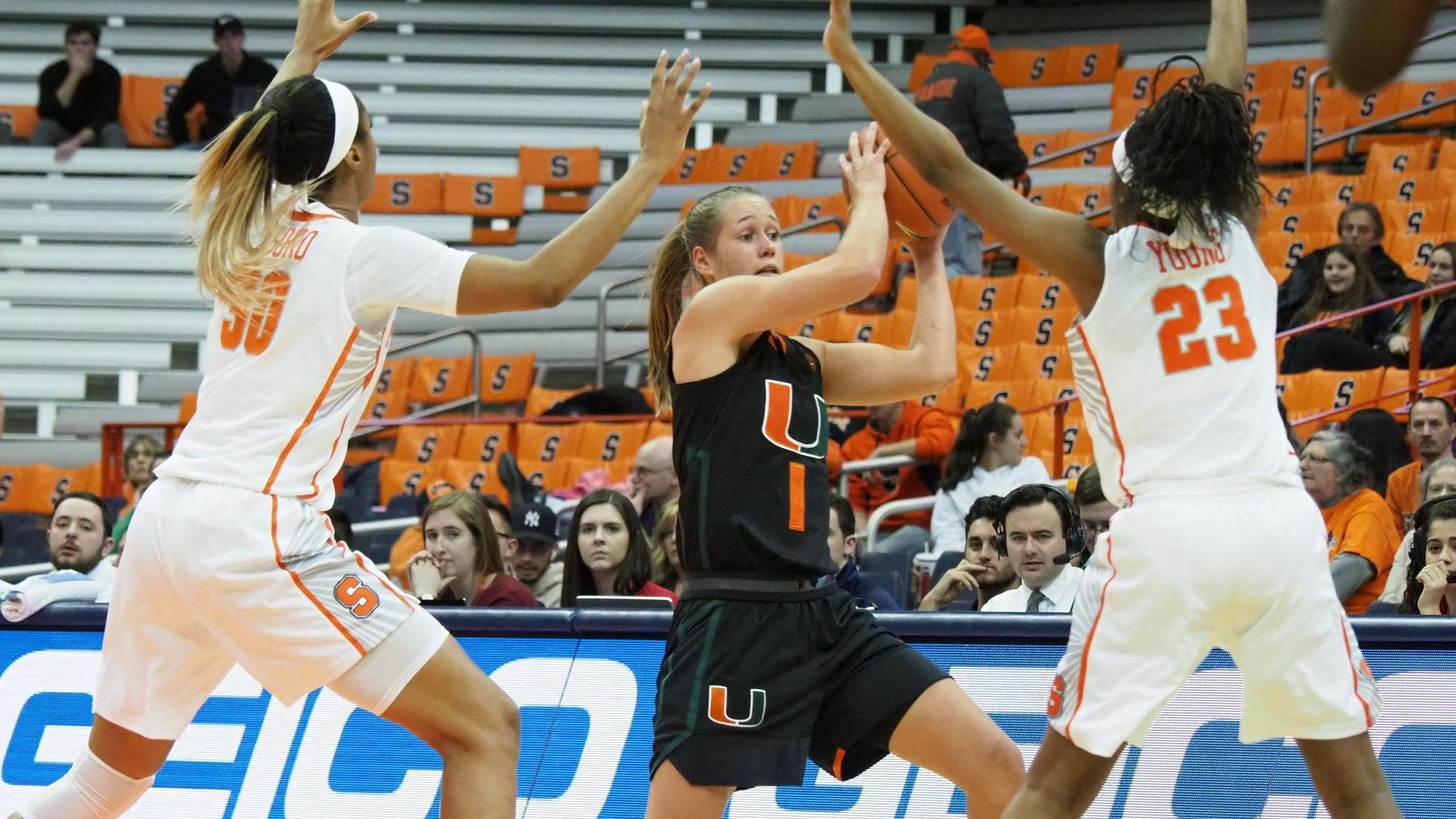 Despite battling foul trouble, senior forward/center Emese Hof paced RV/No. 23 Miami (17-4, 5-1 ACC) with 21 points and tied the school record with an 11-of-11 mark at the free-throw line, as the Hurricanes defeated their third top-25 foe of the year.

“I just loved our toughness. It was a game where we didn’t have a ton of time to prepare and the players knew what was required,” Miami head coach Katie Meier said. “With eight minutes to go, we called timeout. [We told the team], the only minutes we are losing this game—the only time Syracuse has been better than Miami—is when they are out hustling us. So, when they were first to the floor and they’re getting those backside offensive rebounds. I said . . . we have to fix those things right now and I think that we did.”

The second quarter featured seesaw action, opening with a 9-0 run by Miami in the first 2:11. The Orange answered with eight of the next 10 points, followed by the Hurricanes tallying 12 of the ensuing 14, with six coming on a pair of 3-pointers by sophomore guard Kelsey Marshall. Syracuse scored the last basket of the frame and the Hurricanes took a 45-37 edge into the locker room.

The Hurricanes stretched their lead to 11 twice in the third session, but the Orange used an 8-0 run to pull back within three, 56-53. However, as the back-and-forth scoring continued, Miami tallied eight of the final 11 points of the period. A buzzer-beating 3-pointer by junior guard/forward Sarah Mortensen made it 64-56 with 10 minutes left.

A 3-pointer by Syracuse sophomore forward Digna Strautmane cut the Miami edge to three, 70-67, with 3:32 remaining, but the Hurricanes took over the rest of the way. Miami scored 11 consecutive points to take an 81-67 advantage with 47 seconds left.

The Hurricanes, who shot 13-of-14 at the line in the final quarter, pushed their lead as high as 15, en route to their first top-15 victory away from home since March 3, 2017 against No. 8/12 Florida State in the ACC Tournament quarterfinals in Conway, S.C.

“We didn’t pout, we didn’t drop our shoulders. When she hit that shot—I mean, that is what they do. No one made a mistake on that play,” Meier said of Miami’s answer down the stretch. “They had four shooters in at the time and their post play was killing us and we were in foul trouble, so we had to give that up. So I think, when he called that timeout, I wasn’t mad at my team at all . . . [and I said,] ‘We just have to execute down the stretch and we are fine.’ I think the fact that we didn’t pout in that situation was huge.”

Hof’s 20-point outing was the 11th of her career, including her seventh this season. She became the third Hurricane—fourth occurrence—to shoot 11-of-11 at the free throw line, including the first since Tamara James on Dec. 2, 2005 against Farleigh Dickinson. The 11 makes eclipsed her prior career high by two and the 11 attempts matched her top mark, while her 21 points moved her from No. 27 to No. 24 on Miami’s all-time scoring list with 1,036.

Redshirt junior Beatrice Mompremier notched her ACC-leading 15th double-double of the season, including her 10th in her past 11 outings and sixth in a row. The Miami native logged 12 points and a game-high 10 rebounds.

Redshirt junior guard Laura Cornelius also recorded a double-double, the first of her career, as she finished with 13 points and a career-best 10 assists, the most by a Miami player since Riquna Williams hit that mark on Dec. 21, 2009 against Cornell, to lead all players. She also doubled her career block total with a team-high two.

Sophomore guard Mykea Gray added 17 points in the victory, her 10th double-digit showing in the past 11 games and her seventh straight.

“We were just very focused, very locked in. I think it is fun to go on the road with this team,” Meier said. “We had a little bit more time to do film; we had only one day of court prep for this game. It was hard to hear in here, so they kind of had to talk to each other and solve problems.”

The loss for Syracuse was its first at home since an 84-77 setback versus fourth-ranked Louisville on Feb. 4, 2018.

The Hurricanes finished the game 25-of-29 (86.2 percent) on free throws, setting a season high in makes, logging its second-most attempts and third-best percentage. Their 19 makes in the second half were their most either before or after the break this year.

Miami now heads back to Coral Gables, Fla., where it takes on Boston College at the Watsco Center Sunday at 1 p.m.

MIAMI HURRICANES POSTGAME NOTES
– The Hurricanes moved to 20-9 in their all-time series against the Orange, including 3-3 since Syracuse joined the ACC in 2013-14, as the Orange became the sixth team Miami has defeated 20-plus times.
– After starting every game last year, sophomore guard Endia Banks earned her first start of the 2018-19 season, replacing Marshall in the starting lineup.
– The Hurricanes improved to 3-0 against top-25 opponents this season and logged their first top-15 triumph since a 51-48 decision over No. 14/15 Duke on Dec. 31, 2017.
– Mompremier (15), Hof (six) and Cornelius (one) have combined for 22 double-doubles across 18 of the Hurricanes’ 21 games, while five Hurricanes have compiled 18 20-point performances across 16 outings.
– Mompremier surpassed 850 points, 350 made field goals and 300 free-throw attempts in her career, while Cornelius eclipsed 650 points as a Hurricane and Banks moved past 1,250 minutes played.