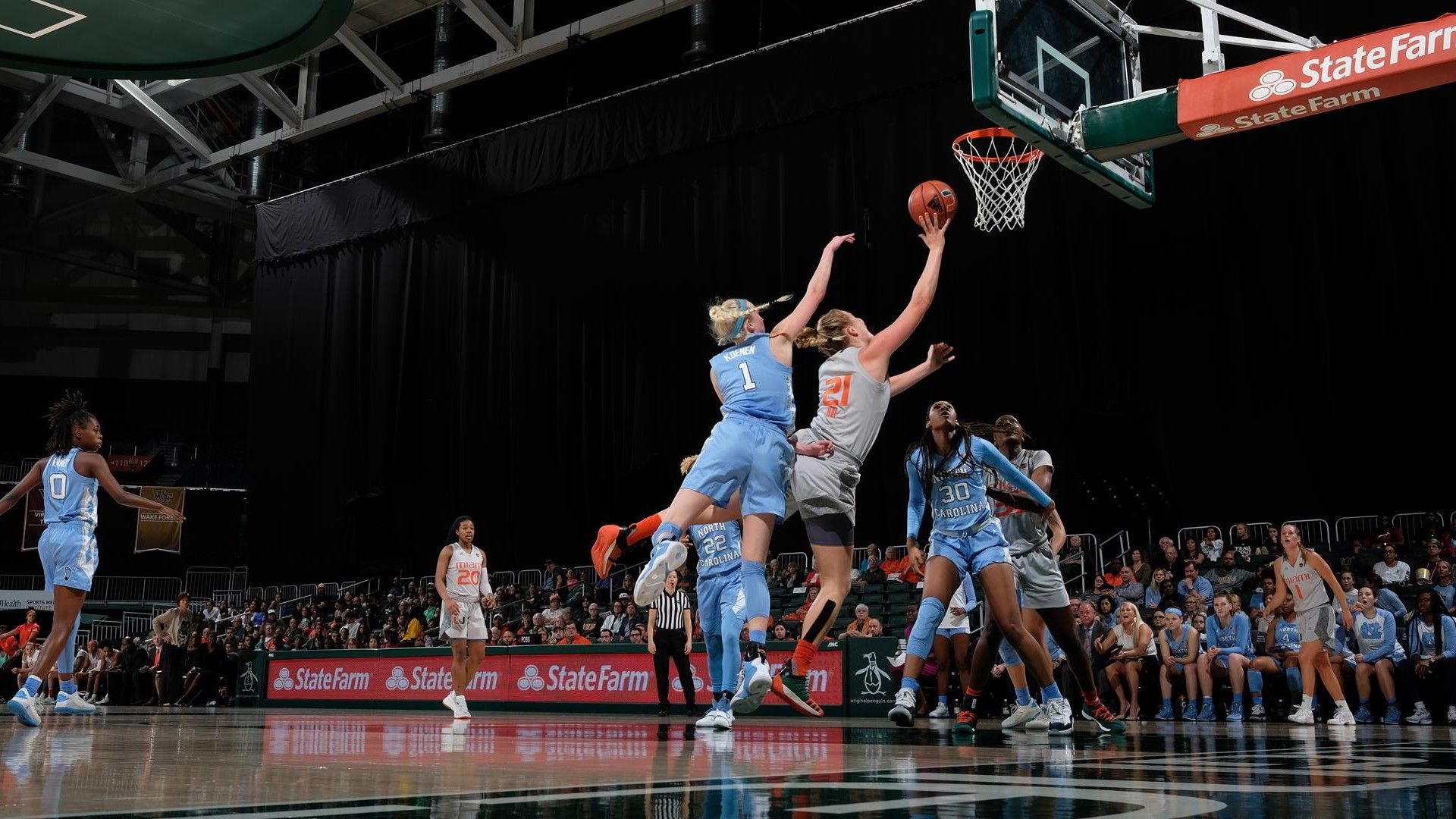 Behind 18 points and 10 rebounds from redshirt junior forward Beatrice Mompremier, Miami (16-4, 4-1 ACC) never trailed in an impressive all-around performance after scoring 27 of the first 32 points.

“We played free. We played aggressive. It was nice to see,” Miami head coach Katie Meier said of the stellar start. “Our first quarter at Duke was very similar. When the kids are locked in, fresh, dialed in and are doing a great job, [we can play like that].”

The Hurricanes immediately seized control of the game with a 21-0 run in a span of 6:54 in the opening period, scoring the first 14 points of that stretch in just 2:33. North Carolina (10-9, 1-4 ACC) went scoreless for 7:15 and missed 11 straight shots, before a three-point play capped the period and made it 27-8 through 10 minutes.

The Tar Heels scored the first seven points of the second quarter, but Miami quickly regained control, conceding just seven the rest of the frame, including not allowing a point for the final 3:33. When the halftime buzzer sounded, the Hurricanes held a 20-point lead, 42-22.

Mompremier and sophomore guard Mykea Gray combined for 29 points in the opening half, with 14 and 15, respectively.

After not playing in the first half, North Carolina sophomore Janelle Bailey aided the Tar Heels offensively in the third session, but Miami still extended its lead. A 3-pointer by junior guard/forward Sarah Mortensen 20 seconds before the buzzer made it 61-40 with one quarter left.

North Carolina, after trailing by at least a dozen for 30-plus minutes, used a 16-2 run late in the fourth period to trim its deficit to eight, 68-60, with 1:39 to go. Miami, though, scored seven of the next nine points to go back up by 13 and seal the game.

“Carolina was playing the style they wanted to play, so at halftime I asked the team to have more discipline,” Meier said. “I thought we did a better job, but I think we lost a little wind in our sails [at the end].”

For Mompremier, who scored 10 points in the first session alone, the double-double was her 14th of the season. The Miami native has nine in her last 10 appearances, including five in a row.

“Heroic effort by Beatrice. Emese is battling in there, making big buckets when we need them,” Meier said. “Mykea’s first half was pretty much perfect, she was fantastic. And then Laura with the 10 rebounds [was huge. It is] to the point where you’re like whatever is necessary [to do, we will do]. We’ll win ugly. That was a beautiful game for a while there. You’re supposed to win the game and we’ve been finding a way to win.”

North Carolina redshirt junior guard Stephanie Watts paced all players in both points (22) and rebounds (14). Redshirt senior guard Paris Kea was the lone other Tar Heel to tally double-digit points, finishing with 10 on 3-of-11 shooting.

Miami, which led for all but 28 seconds of action, ended the game with a 21-6 edge in second-chance points, as well as a 49-37 advantage in rebounding.

MIAMI HURRICANES POSTGAME NOTES
– Miami moved to 10-13 in its all-time series against North Carolina, including 6-2 over the past eight matchups.
– The Hurricanes have now defeated both Duke and North Carolina in the season in three of the past four years, including two in a row, after never doing so once prior to 2015-16.
– Gray logged double-digit points for the ninth time in the past 10 games and is averaging 16.1 points over that stretch after scoring in single figures and averaging 5.5 points over the prior eight contests.
– Mompremier and Hof have combined for 20 double-doubles across 17 of the Hurricanes’ 20 outings, with 14 and six, respectively.
– Gray eclipsed 200 made field goals as a Hurricane, Mompremier reached 150 made free throws in her career, Mortensen reached 250 points as a collegian, Cornelius reached 250 assists at Miami, redshirt senior forward Khaila Prather reached 100 games played as a Hurricane and sophomore guard Taylor Mason eclipsed 750 minutes played in her career.