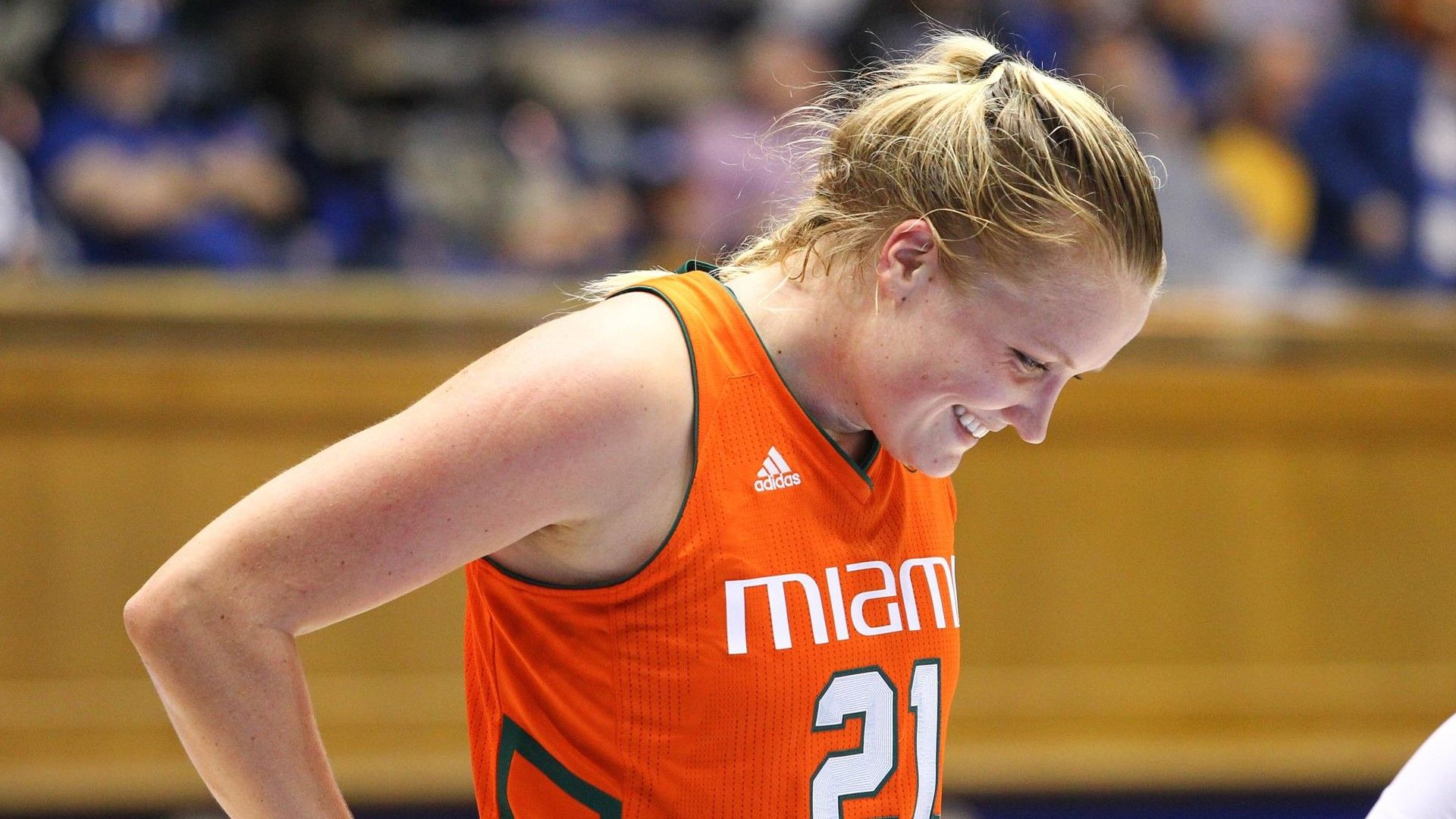 Redshirt junior forward Beatrice Mompremier led the way for Miami (15-4, 3-1 ACC), logging game highs in points (16) and rebounds (17) to register her 13th double-double of the season.

“It was a winnable ACC road game due to some circumstances and we needed to grab it,” Miami head coach Katie Meier said. “That’s what it means more for this particular team, for these seniors. I have to say it was fun; it was fun winning here.”

Both teams made 11 field goals in the half, but Miami did so on 20 attempts while Duke needed 34. Mompremier reached the double-double mark in the first half alone for the Hurricanes, tallying 10 points and 10 rebounds before the break.

After neither team scored in the first three minutes of the third session, Duke scored five straight points to go back in front. The Blue Devils then made five consecutive field goals late in the frame and took a narrow three-point edge, 41-38, into the final quarter.

After a 3-pointer by freshman guard Miela Goodchild put the Blue Devils ahead, 47-45, with 3:44 left, Miami responded with seven points in a row to go in front, 52-47, with 1:23 on the clock. Five of the points came from Mompremier, who helped the Hurricanes cap the contest on a 13-3 run in the final 3:26 and win by the largest margin of the game either way, eight points.

Mompremier notched her eighth double-double in her past nine outings, including her fourth in a row. The Miami native reached 15 rebounds in her second consecutive appearance, with her final total of 17 the second-most of her career. She also set season highs in free throws made (six) and attempted (12).

Senior forward/center Emese Hof played 35 minutes, the most of her career in ACC play, posting 13 points, seven rebounds and a co-game-high three blocks, while eclipsing 1,000 points in the process. Sophomore guard Mykea Gray added 12 points in the win.

“The fact that her 1,000th point was on a run-out was amazing because that was really courageous,” Meier said of Hof. “I think it was Laura [Cornelius, a fellow Netherlands native] that made the pass, which means a lot. That’s what I love about this team; we were celebrating in the locker room [and the reason] . . . was because Emese got her 1,000th point and she’s given her heart and soul to this team.”

Goodchild paced the Blue Devils with 13 points, while junior forward Leaonna Odom notched 11, but Miami held her to 5-of-14 shooting. Duke’s leading scorer, redshirt junior guard Haley Gorecki, finished with six points  on 2-of-12 shooting, including a 0-of-5 mark from 3-point range.
Miami concluded the game with a 34-18 edge in points in the paint, as well as a 40-32 advantage in rebounding.

“The other team’s staffs [in the ACC] are so talented, they’re going to make you uncomfortable,” Meier said. “In the ACC, you better be prepared to win in the 50s or win in the 80s. You have to everything ready. It was going to be ugly.”

The Hurricanes resume play Sunday afternoon when they host North Carolina at 2:30 p.m., live on RSN from the Watsco Center.

MIAMI HURRICANES POSTGAME NOTES
– The Hurricanes moved to 4-14 in the all-time series with Duke, including 4-4 in the past eight meetings and notching back-to-back wins for the first time.
– For Meier, this marked the first time she has notched a road win against her alma mater and logged a victory as a coach in the arena in which she played as a collegian.
– Hof became the 27th member of Miami’s 1,000-point club and the first to reach that total since the 2016-17 campaign when Jessica Thomas and Keyona Hayes did so.
– Mompremier, who missed the Hurricanes’ last game due to a family matter, and Hof have combined for 19 double-doubles across 16 of Miami’s 19 games this season, with 13 and six, respectively.
– Along with Hof surpassing 1,000 points, Mompremier eclipsed both 1,500 minutes played and 650 rebounds in her career, Gray moved past 600 points as a Hurricane, redshirt junior guard Laura Cornelius reached 25 starts and 100 free-throw attempts as a collegian, sophomore guard Kelsey Marshall reached 50 games played at Miami, junior guard/forward Sarah Mortensen reached 75 games played in her career and sophomore guard Endia Banks reached 200 rebounds as a Hurricane.