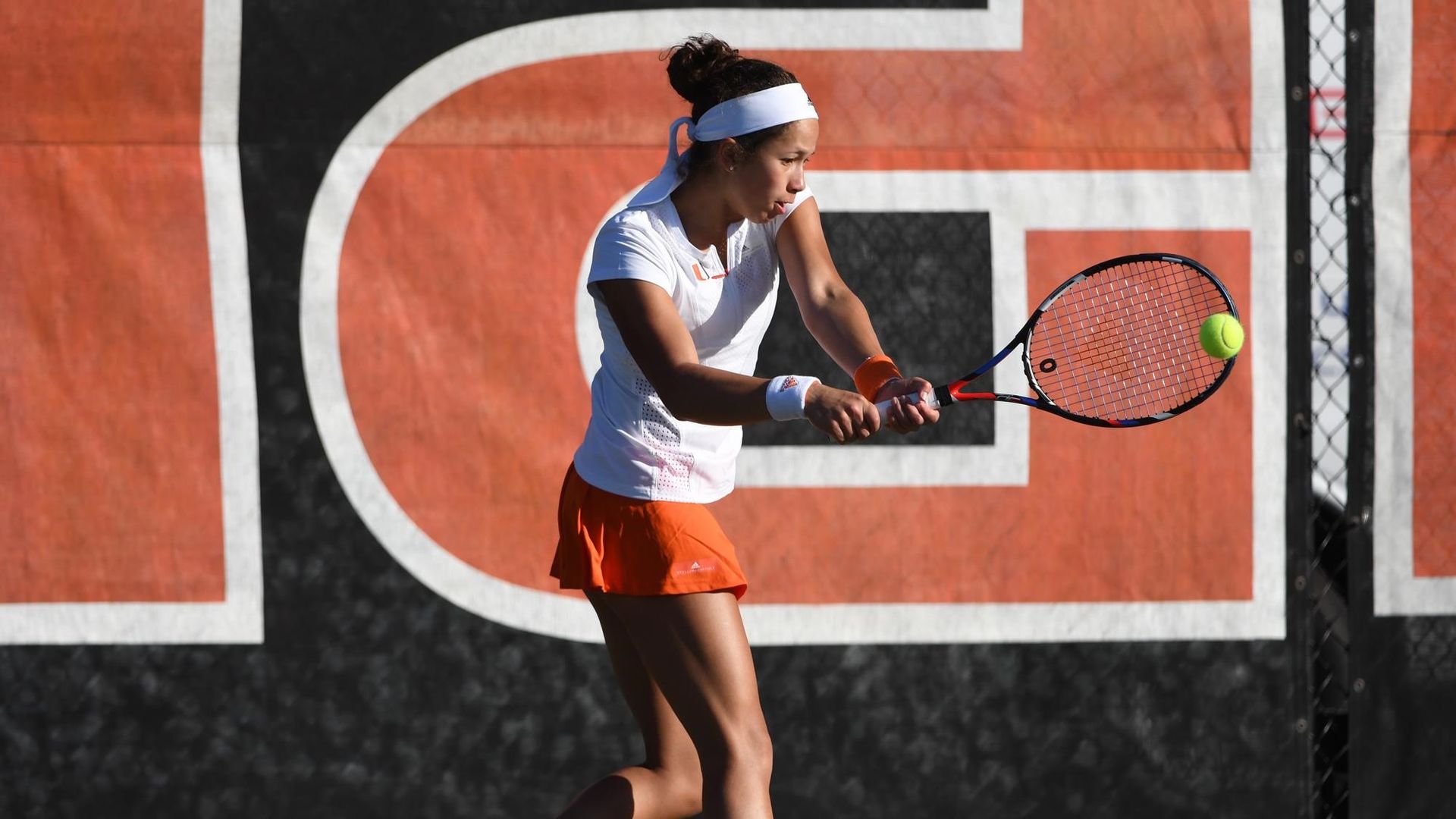 No. 17 Miami posted a 6-6 overall record, including an unblemished 4-0 ledger in doubles, on the first day of action in the Miami Spring Invite. Freshman Daevenia Achong, making her collegiate debut, and junior Yuna Ito led the way for the Hurricanes, notching victories in both singles and doubles.

“Happy to be back on the court and happy to see the new freshmen, Daevenia and Carla [Girbau]” Miami associate head coach Laura Vallverdu said. “We’re looking for tougher starts and we’re looking for third sets not to get away from us. [We need to] just stay tough and dig deep until the end.”

The Hurricanes opened the day with eight singles competitions against No. 19 Northwestern. Ito, in her first spring action as a Hurricane, logged Miami’s first result of the season with a resounding 6-0, 6-1 triumph over Lee Or.

Achong, in her first college match, impressed with a 6-3, 6-3 decision against Inci Ogut. After winning the first two completed matches, the Hurricanes came up short in the remaining contests, four of them in third sets.

Seventh-ranked Estela Perez-Somarriba dropped a home match for just the second time in her career and the first since Sept. 23, 2017. The junior mounted a furious second-set comeback bid from a 2-5 deficit, but fell a deciding point shy of pulling even, as No. 100 Clarissa Hand earned a 6-3, 6-4 victory.

After earning a hard-fought first-set win in tiebreaker fashion against Julie Byrne, No. 82 Daniella Roldan came up short in a 7-6 (8-6), 2-6, 2-6 decision. Senior Ana Madcur took the first set against Rheeya Doshi, but dropped the next two sets by the same score and fell short in the match, 7-5, 3-6, 3-6.

Sophomore Ulyana Shirokova rallied from a 2-5 third-set deficit to pull even at five against Streng, but the latter took the final two games to seal a 6-3, 2-6, 7-5 triumph. Freshman Lucia Marzal held a 5-2 edge in her final set, but could not seal the deal, as Carol Finke tallied a 4-6, 6-4, 7-5 victory.

In Miami’s last singles match of the day, Girbau, in her collegiate debut, stormed back from a 1-4 second-set deficit to force a tiebreaker, in which she jumped out to 3-0 lead. However, she ultimately fell to Caroline Pozo, 2-6, 6-7 (5-7).

The Hurricanes quickly bounced back with an impressive showing in doubles play, winning all four outings versus Kentucky, which is receiving votes in the Oracle/ITA rankings. Achong and Perez-Somarriba, playing together for the first time, defeated Tiphanie Fiquet and Akvile Parazinskaite, 6-2.

“Daevenia had a great day today,” Vallverdu said. “She was a little nervous, but she did a good job fighting through.”

Shortly thereafter, the No. 51-ranked duo of Ito and Shirokova edged Lesedi Jacobs and Justina Mikulskyte, 6-4. Madcur and Roldan then defeated Alexis Merrill and Anastasia Tkachenko by an identical score.

Girbau and Marzal capped the day by posting a 6-2 victory over Diana Tkachenko and Brianna Tulloch, giving the former her first win at the college level.

“We’ve been talking about energy and the girls implemented that, which makes me happy,” Vallverdu said of Miami’s doubles performance. “So, we’re looking for that again tomorrow.”

Miami will resume play Saturday at 1 p.m. when it meets Northwestern in doubles. The Hurricanes then face second-ranked Vanderbilt in doubles at 2 p.m.