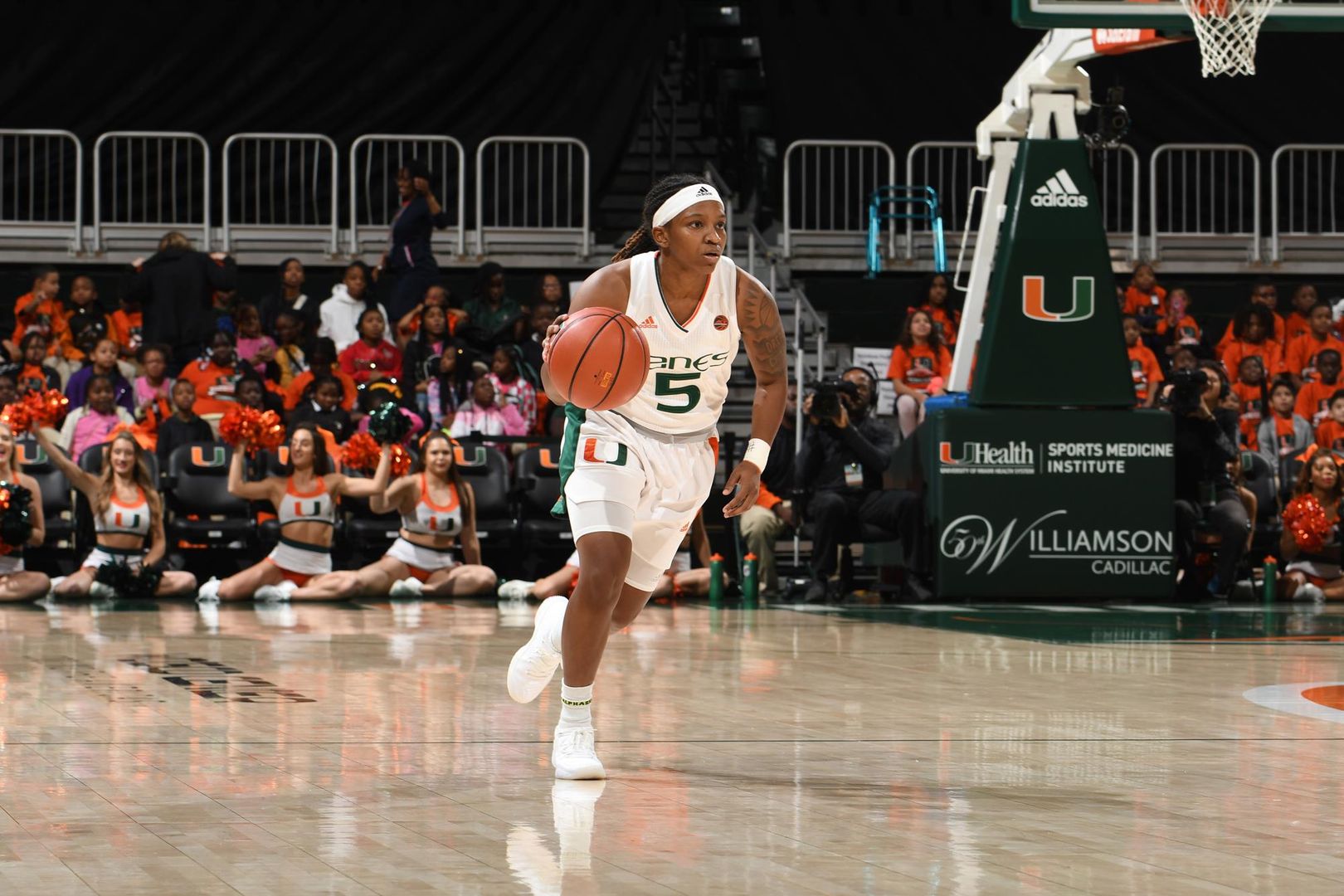 CORAL GABLES, Fla. – The University of Miami women’s basketball team fell to Clemson, 76-67, Thursday in front of 2,490 fans on elementary school day at the Watsco Center.

Despite a game-high 24 points from sophomore guard Mykea Gray, RV/No. 23 Miami (14-4, 2-1 ACC) was unable to overcome the absence of its leading scorer and rebounder, redshirt junior forward Beatrice Mompremier, who missed the game due to a family matter.

“I just think that we don’t pursue the ball hard enough and we’ve had that problem all year. We’ve had an easy escape route, if you are a guard, you have an easy escape,” Miami head coach Katie Meier said. “It doesn’t have to be a perfect pass because Bea and Emese [Hof]—when she is fresh—they catch everything. There is a lot of space to throw the ball. The space was smaller today and we didn’t pursue . . . We have to get a lot tougher and be cleaner with the ball.”

Gray scored Miami’s first seven points and tallied nine in the first quarter, shooting 7-of-7 at the line, to help the Hurricanes take a 17-13 lead through 10 minutes.

In a seesaw start to the second period, Clemson (11-5, 2-1 ACC) opened with a 9-0 run, but Miami quickly countered with five straight points before the Tigers countered with six in a row to go in front, 28-22. Clemson led by as many as eight points in the frame and took a 34-28 edge into the locker room.

Led by a 10-of-11 clip from Gray, who attempted all of her free throws before the break, Miami set new season highs for first-half free throws made (15) and attempted (16), good for a stellar 93.8 percent clip. Meanwhile, the Tigers also got to the line with consistency in the half, shooting 10-of-17.

The Hurricanes used a 9-0 run in a span of 1:42 early in the third period to pull in front, 39-36. Clemson scored the next three points to tie the score, but Miami never relinquished the advantage in the session and pushed it as high as six. Entering the final quarter, the Hurricanes narrowly led, 49-46.

Clemson went on a 13-5 run in the last period to match its largest lead of the game, eight points, and take a 65-57 edge with 4:29 remaining. The Hurricanes could not climb back from there and dropped their first ACC contest of the season.

“There were five plays today in the second half where there was a ball that we assumed was out of bounds or assumed was ours and Clemson dove in and saved it,” Meier said. “That’s instincts and habits. We’ve got to change. We got a little bit complacent with always getting rescued [by Hof and Mompremier].”

Along with setting a career best for points in ACC play, Gray added five rebounds, one off her career high, and a co-career-best four steals, while notching her eighth-career 20-point game, including her fourth of the season and second in a row. Redshirt junior guard Laura Cornelius finished with 15 points in the contest.

Hof, a senior forward/center, compiled 11 points and a game-high 11 rebounds to record the 13th double-double of her career. She added a game-best five blocks, tying her career best and reaching that number for the third time in 2018-19.

Miami concluded the day 21-of-23 from the free throw line, finishing one shy of its season best in makes and setting a new high with a 91.3 percent mark. The Tigers tallied an 18-4 edge in bench points on the day.

After a weekend bye, the Hurricanes resume plan Jan. 17, when they take on Duke at 7 p.m. in Durham, N.C.

MIAMI HURRICANES POSTGAME NOTES
– The Hurricanes dropped to 11-7 in their all-time series against Clemson, including 8-2 in the past 10 meetings, and had their four-game winning streak in the series snapped.
– Clemson head coach Amanda Butler, in her first year directing the Tigers, served as Meier’s assistant coach for two years and associate head coach for two years when she was the head coach at Charlotte from 2001-05.
– With Mompremier out, redshirt senior forward Khaila Prather earned the third start of her career and first start since Feb. 25, 2016, while the Hurricanes used their third starting lineup of the year.
– Through 18 games on the season, Hof (six) and Mompremier (12) have combined for 18 double-doubles across 15 games, while five different Hurricanes have combined to total 17 20-point performances.
– Gray and fellow sophomore guards Endia Banks, and Taylor Mason all played in the 50th games of their careers, with Gray also logging her 50th start, while Hof surpassed both 150 blocked and 2,250 minutes played as well as reached 75 steals at Miami.