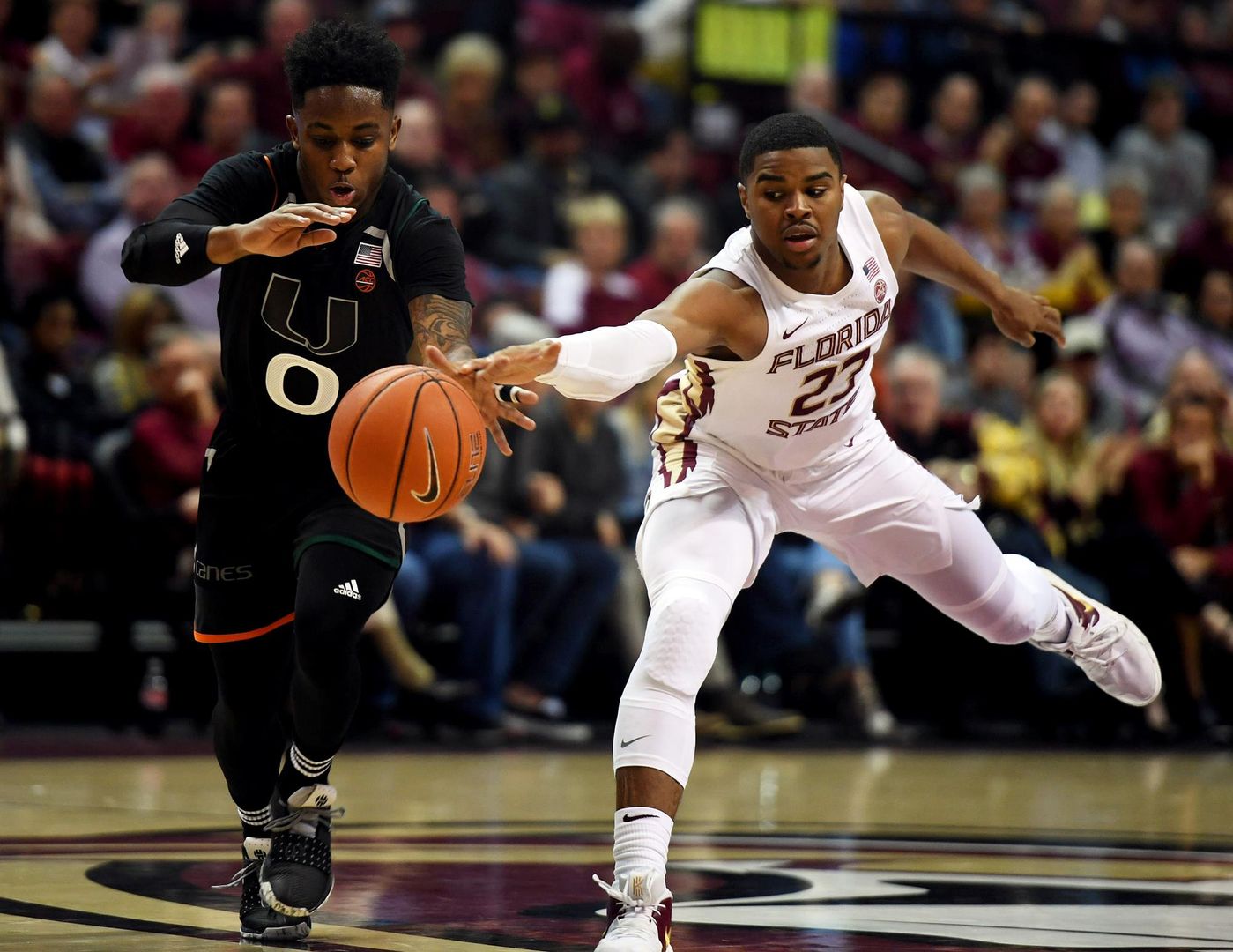 TALLAHASSEE, Fla. – Chris Lykes scored 17 points and the University of Miami men’s basketball team rallied to cut its deficit to two points in the final minute, but the Hurricanes (8-7, 0-3 ACC) dropped a 68-62 ACC contest at No. 13 Florida State Wednesday evening at the Donald L. Tucker Center in Tallahassee, Fla. Anthony Lawrence II added 14 points and Ebuka Izundu recorded 13 points and nine rebounds for the Canes.

Florida State out-rebounded Miami, 38-31, and committed just nine turnovers to a dozen for the Canes.

Miami trailed by as many as 13 points in the second half but rallied to pull within two, 64-62, on a Zach Johnson layup with 56 seconds remaining. Following an FSU timeout, the Canes’ Phil Cofer missed a layup, but Terence Mann tipped it back in for a four-point lead. On the ensuing possession, Johnson’s layup rimmed out, as did Izundu’s follow attempt, and the Noles sealed the win with a pair of free throws.

Miami was plagued by poor shooting and foul trouble to Izundu and Lawrence II in the first half but stayed in the game through free-throw shooting, going into the break down just four, 33-29. The Canes shot just 29 percent (7-24) in the first half but nailed 13 of its 15 attempts from the charity stripe.

Miami kept battling and pulled to within five, 64-59, with 2:08 left following a Johnson layup. After the Canes forced a tie-up to gain the possession back, Johnson drove to the hole and was fouled. He split the free throws to cut the lead to four. Miami then forced another turnover, and Johnson again drove to the hole and scored again with 56 seconds left.

The Canes return home Saturday (Jan. 12) for a 2 p.m. game with Wake Forest. The ACC’s Regional Sports Networks, including FOX Sports Florida and FOX Sports South, have the television broadcast.

Game Notes
• Under Jim Larrañaga, Miami is 48-39 in true road games, including 31-33 in ACC play.
• With a 38-35 lead in the second half, Miami now has led in the second half in 14 of 15 games this season (Penn is the lone exception).
• Miami went 8:31 without a field goal in the first half, but despite that, in that span the Canes went from up two points to down three points.
• Miami shot 29.2 percent (7-24) in the half, its second lowest performance in any half this season (28.6 percent in first half against Bethune-Cookman).
• DJ Vasiljevic hit a pair of 3-pointers and has connected on at least one shot from long range in 28 straight games, the longest current streak among ACC players.
• It also is the fifth-longest streak in program history.
• Zach Johnson scored six points and has scored 1,550 career points (1,344 at Florida Gulf Coast, 206 at Miami).
• Johnson set a season high in rebounds with six.
• With 17 points, Chris Lykes scored 16 or more points for the 11th time in 15 games.
• Anthony Mack made his second career start and recorded a season-high four assists.
• Walk-on guard Willie Herenton played three minutes late in the first half, the second straight game in which he has earned first-half minutes.