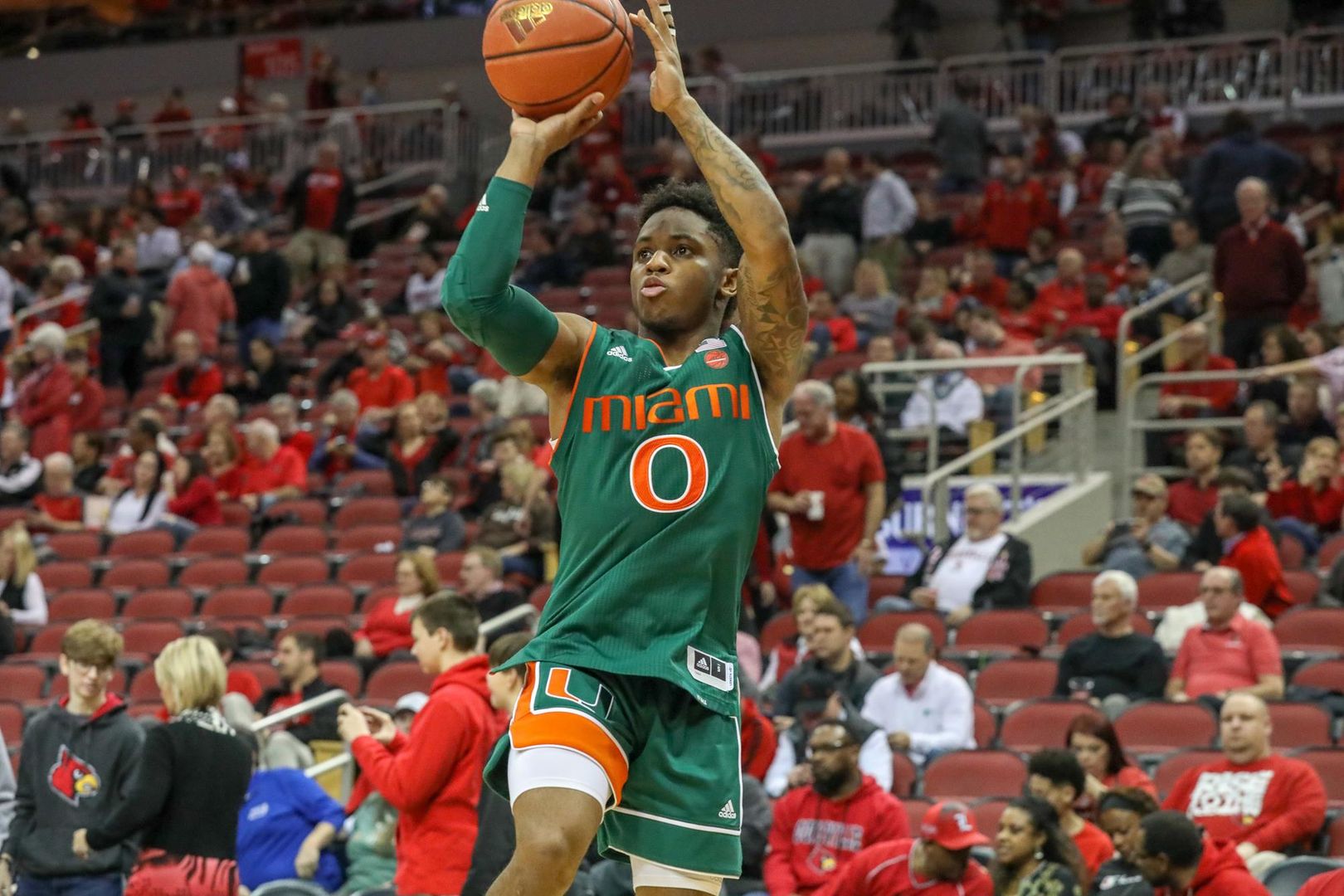 LOUISVILLE, Ky. – The University of Miami men’s basketball team lost at Louisville, 90-73, Sunday evening at the KFC Yum! Center in Louisville, Ky. The Canes (8-6, 0-2 ACC) led by as many as 15 points in the first half, only to see Louisville (10-4, 1-0) rally to within a point at halftime before the Cardinals took the lead for good nearly six minutes into the second half.

DJ Vasiljevic and Zach Johnson led Miami with 19 points, while Chris Lykes added 18 points. Louisville was led by Jordan Nwora, who paced all scorers with 20 points, including 18 in first half. Malik Williams added 19 points and a game-high 11 boards.

The Canes led for all but 56 seconds in the first half. The Canes hit five of their first seven 3-point attempts and led by as many as 15 points, 30-15, following an Ebuka Izundu bucket and foul shot with 9:28 remaining.

Louisville then got rolling, hitting 5-of-6 shots to run off 11 straight points over 1:51 and cut the lead to three, 32-29, before Lykes canned a 3-pointer from the top of the key with 6:13 left to briefly quiet the crowd. UL continued to chip into the lead while four Miami players racked up two or more fouls apiece, with the Canes holding on to take a one-point lead to the break, 41-40.

After scoring the opening basket of the game, Louisville trailed until tying the game and then breaking the tie following back-to-back 3-pointers from Christen Cunningham. His second straight triple gave the Cardinals a 53-50 advantage at the 14:10 mark, which gave UL a lead it would not relinquish. That was part of a 16-2 UL run as the Canes went without a field goal for just over five minutes until Vasiljevic drilled a 3-pointer with 10:22 remaining. The Canes got no closer than eight points the rest of the way.

Miami has a quick turnaround before heading back out on the road Wednesday with a 9 p.m. game at No. 9 Florida State. The ACC’s Regional Sports Networks, including FOX Sports Sun and FOX Sports South, have the television broadcast. The Canes are back home next Saturday (Jan. 12) for a 2 p.m. game with Wake Forest.

Game Notes
• Under Jim Larrañaga, Miami is 48-38 in true road games, including 31-32 in ACC play.
• Miami led at the half for the ninth time in 14 games and dropped to 6-3 when holding a halftime edge.
• Louisville’s 90 points are a season high for a Miami opponent (Penn, 89).
• Louisville hit 13 3-pointers, matching a season high for a Miami opponent (Penn).
• Miami recorded a season-low seven assists (previous low was 10 at Penn).
• DJ Vasiljevic hit a season-high five 3-pointers, going 5-of-8. He has connected on at least one shot from long range in 27 straight games, which is the longest current streak among ACC players.
• It also is tied with Davon Reed (2016-17) for the fifth-longest streak in program history.
• It was Vasiljevic’s ninth game this season with at least three 3-pointers.
• Zach Johnson scored 19 points and has scored 1,544 career points (1,344 at Florida Gulf Coast, 200 at Miami).
• With 18 points, Chris Lykes scored 16 or more points for the 10th time in 14 games.
• Ebuka Izundu (10 rebounds) recorded his sixth game of 10-plus rebounds this season.
• Sam Waardenburg set a career high with eight rebounds. He is previous high was seven, set on Jan. 24, 2018, at home in the overtime win against Louisville.
• Anthony Mack made his first career start.
• Willie Herenton appeared in his first ACC game, playing the final 1:01 of the first half.

Quotes
Miami head coach Jim Larrañaga
(Opening Statement)
“I thought we played a terrific first 12, 13 minutes. We had a nice lead, I think it was like 32-21, or something like that. And then, it became the (Louisville sophomore forward) Jordan Nwora highlight tape—he went off, played great in those next five minutes. So much so that we switched to a box-and-one to slow him down. I thought it worked okay, because we had done something that we, the game plan, said we can’t do this, we can’t foul. We’re third in the country in not fouling, so this was a game where we for sure can’t foul because they’re one of the best teams in the country in getting to the foul line. Of course, they got to the foul line. To end the half, we had three, four guys in foul trouble. In the second half, we started out trying to play the box-and-one. It went fine except offensive rebounds. They got several rebound baskets that really hurt us. And then, we just ran out of gas. We can score, but we can’t rebound with a team that size. (Louisville sophomore forward) Malik Williams was terrific in the second half and (Louisville junior guard) V.J. King coming in and tipping it in…”

(On why Jordan Nwora was so effective)
“He’s really good. He takes twice as many shots as any guy on their team and he’s averaging like 19 a game, and he had 18 at halftime. So, we had to do something about that. He ended up with 20. So, in a sense, it worked. Except, everybody else then chipped in and had a great second half. And when we went back to man when we were in foul trouble, guys were not D-ing up the way they did when they had no fouls or one foul. It becomes a real issue.”

(On losing early leads, is it a situation where things just kind of fall apart?)
“‘Fall apart’ is not how I would describe it. We have one center, and one stretch four-man, everybody else is a guard, just not very big. (Miami senior center) Ebuka Izundu is someone that we need out there. He gets worn out, especially when he’s got to go against guys like (Louisville redshirt junior center Steven) Enoch and Malik Williams. They just keep rotating those guys, keeping fresh bodies on the court. And when we take him out, we’ve got (Miami redshirt sophomore forward) Sam Waardenburg and he’s slight. He can’t battle physically with guys that size and girth. So then, we get killed on the boards.”