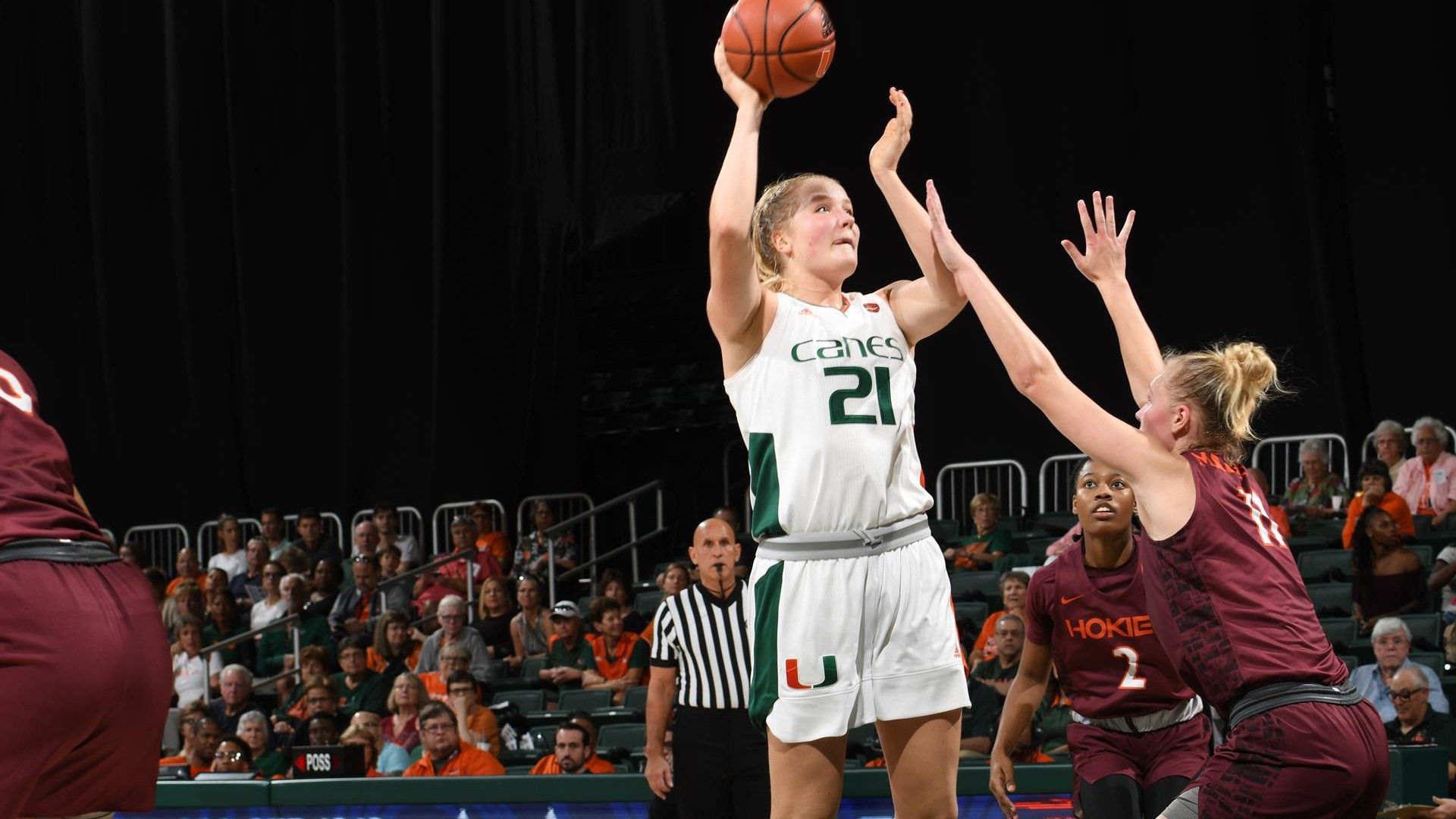 CORAL GABLES, Fla. – Just as it did two years ago, the University of Miami women’s basketball team earned a victory over ranked and previously undefeated Virginia Tech.

“I just thought it was the toughest we have played all year,” Miami head coach Katie Meier said. “We got a little soft when we were scoring in the 100s and 90s. We needed to reinvent ourselves and become a team that can rely on its defense. [Allowing just] 61 points against a team that talented is tremendous.”

The first period featured seesaw action, with Miami scoring eight of the first 10 points, Virginia Tech tallying eight of the next 10, the Hurricanes notching the ensuing nine in just 1:28 and the Hokies logging the final five. Through 10 minutes of play, Miami held a 19-15 advantage.

The back-and-forth action continued in the second quarter and the Hurricanes entered the half tied for the first time this season with the score even at 34.

Virginia Tech opened the second half on an 11-2 run to take a game-high nine-point edge, 45-36, but Miami quickly countered. The Hurricanes scored 10 consecutive points to take the lead and closed the frame on a 16-2 run over the final 6:36, giving them a 52-47 advantage entering the last quarter.

“I thought that we stayed faithful. I am an emotional coach, but in that timeout I also had to give them a plan,” Meier said of Miami’s answer in the third frame. “It wasn’t just our energy; we got away from what was successful in the first half and I thought that our veterans became way more vocal after that timeout. This team cannot be led by the coaches, it has to be led by the players.”

The Hokies pulled within three in the last period, but Miami never relinquished the advantage and stretched its edge as high as eight in the last minute to post a win in its ACC opener for the sixth time in seven years.

Hof shot 9-of-14 from the field to post her sixth 20-point outing of the season and set a career high for points in an ACC game, as well as added seven rebounds and a game-best four blocked shots. Mompremier tallied 18 points and a game-high 13 rebounds. Additionally, sophomore guard Mykea Gray finished with 13 points in the victory.

“Basketball is getting away from the double bigs, but I have them and I love them. I think they are awfully smart, so we are going to ride this,” Meier said of Hof and Mompremier. “I think it was a bad 3-point shooting game for us. I was proud of our guards, but we just didn’t have our rhythm. I think they were so focused on getting the ball inside, they weren’t looking for their own shots. So, when we blend [all that] together, we are a pretty potent offensive team.”

The Hurricanes concluded the game—the first ACC action of the season for any teams—with a 38-22 advantage in points in the paint and a 45-33 edge on the glass. With the victory, Miami has now logged multiple wins over a ranked team in nine of the past 10 seasons. In addition, the triumph was Meier’s 100th in ACC play at the helm of the Hurricanes and the program’s 200th win at the Watsco Center.

Miami will play its first ACC road game of the season Sunday at 1 p.m. when it meets Wake Forest in Winston-Salem, N.C.

MIAMI HURRICANES POSTGAME NOTES
– The Hurricanes improved to 21-6 all-time against Virginia Tech, tied for its fourth-most wins against any opponent.
– Miami’s 15 consecutive victories over the Hokies are its third-most versus any opponent and it has won those contests by an average of 13.2 points per game.
– Mompremier and Hof have combined for 16 double-doubles across 13 of Miami’s 16 games this season, with 11 and five, respectively, while
– Five different Hurricanes have combined for a total of 15 20-point outings across 13 of the team’s 16 games thus far.
– Hof surpassed 600 rebounds and reached 250 free-throw attempts as a Hurricane, Gray reached 75 made 3-pointers in her career, redshirt junior guard Laura Cornelius eclipsed 600 points at Miami and sophomore guard Kelsey Marshall moved past 1,000 minutes played as a collegian.