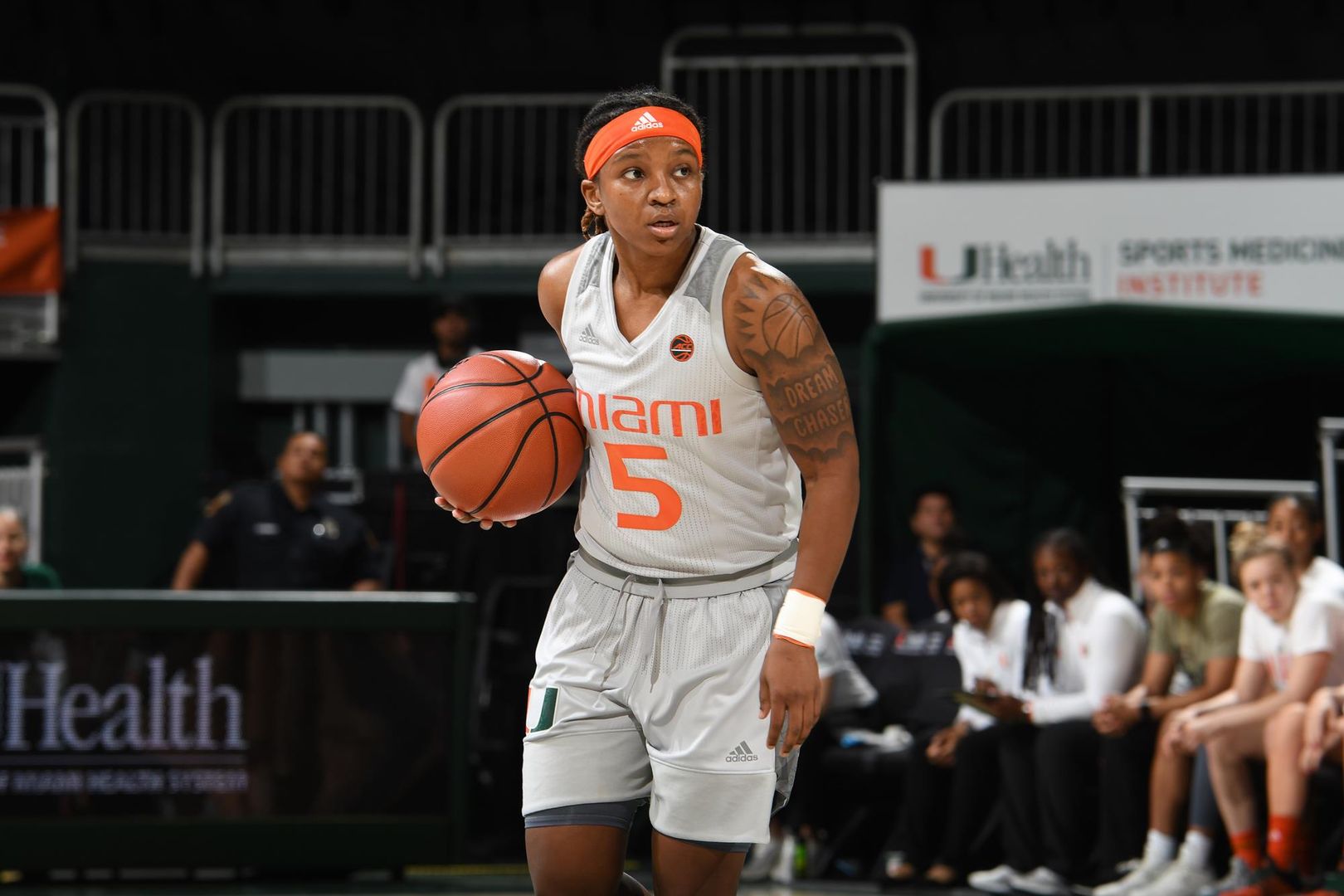 CORAL GABLES, Fla. – The University of Miami women’s basketball team rallied back from an 11-point deficit Sunday against Central Michigan to tie the game, but came up just short in a 90-80 decision in the Miami Holiday Classic.

“What the game was going to come down to was our bigs. Could our bigs dominate their 3-point shooting? That was the choice,” Miami head coach Katie Meier said. “Beatrice [Mompremier] and Emese [Hof were] covering 3-point shooters because they ran a ton of ball screens. Did we have to switch them, did we have to return, did we have to trap them? We tried everything, but our bigs had to cover a lot of ground and that is what Central Michigan does. They try to neutralize your bigs.”

After Miami took an 18-11 lead, Central Michigan (9-3) answered with a 15-3 run, including scoring eight straight points in 61 seconds to open that span, and grabbed a 26-21 edge through one quarter. The Chippewas made five of their first six 3-pointers and finished the period at 6-of-8, with senior forward Reyna Frost making all three of her attempts and tallying 15 points.

Central Michigan upped its lead to 11 three times in the second frame, but a buzzer-beating 3-pointer by sophomore guard Mykea Gray made it an eight-point game, 50-42, at the intermission.

The Hurricanes used a 7-0 run, capped by a 3-pointer from Gray, late in the third period to tie the score with 1:36 to go in the session. Central Michigan scored the last four points of the quarter and took a 62-58 edge into the final period.

After a 3-pointer by junior guard/forward Sarah Mortensen to start the fourth frame trimmed the deficit to one. Central Michigan soon responded with 3-pointers on three straight possessions and took a 71-64 advantage with 7:15 to play.

The Hurricanes cut the lead to three, 82-79, with 33.6 seconds left on a trio of free throws by redshirt junior guard Laura Cornelius, but Central Michigan countered with eight straight points to seal the win.

“I think our bigs, in the fourth quarter, because of all of the chasing they did, missed some tired shots,” Meier said. “And then we had a couple missed layups by our guards, too. We were tired, we chased them around. They do that, they are very well conditioned. We’ve got to get better for ACC play.”

Mompremier, a redshirt junior forward, led the Hurricanes with 22 points and a game-high 11 rebounds, good for her 10th double-double and third 20-point outing of the season. She earned Miami Holiday Classic All-Tournament honors, her fourth all-tournament distinction in as many events this year.

Gray logged 17 points and sophomore guard Kelsey Marshall added 12, tying a career high with four made 3-pointers. Hof, a senior forward/center, finished with 10 points to go along with a career- and game-high six assists, while Cornelius tallied nine points and a career-high nine rebounds.

The Chippewas’ 90 points were the most the Miami has conceded since No. 12 Florida State tallied 91 on Feb. 11, 2018. The Hurricanes finished with a 36-16 edge in points in the paint, but Central Michigan made four more 3-pointers than any other Miami opponent this year.

“They played really, really well. Credit to them because yesterday they had a rough day,” Meier said. “They don’t lose three in a row in their program and I knew they would come in here fired up. I thought we could withstand [them, but in] . . . the first quarter they were out of their minds. The rest of the game, they [played as] they usually are, which is still a phenomenal team, but I think we left too many points at the rim.”

The Hurricanes will open the 2019 calendar year with their first ACC game of the season, as they host Virginia Tech Jan. 3 at the Watsco Center.

MIAMI HURRICANES POSTGAME NOTES
– This was the first meeting between the Hurricanes and Chippewas, as Miami moved to 1-2 this season against first-time opponents.
– Mompremier was joined on the Miami Holiday Classic All-Tournament Team by Frost, Florida A&M’s Candice Williams, Tulane’s Kayla Manuirirangi and the MVP, Tulane’s Krystal Freeman.
– In Miami’s three defeats this season, its opponents have combined to shoot 35-of-73 (47.9 percent) from 3-point range, including a 28-of-48 (58.3 percent) mark in the past two.
– Five different Hurricanes have combined for 14 20-point performances across 12 of Miami’s 15 contests thus far.
– Mompremier made the 50th start of her career and surpassed 600 rebounds, Marshall reached both 400 points and 75 assists as a Hurricane, while Hof eclipsed 950 points and reached 400 made field goals at Miami.