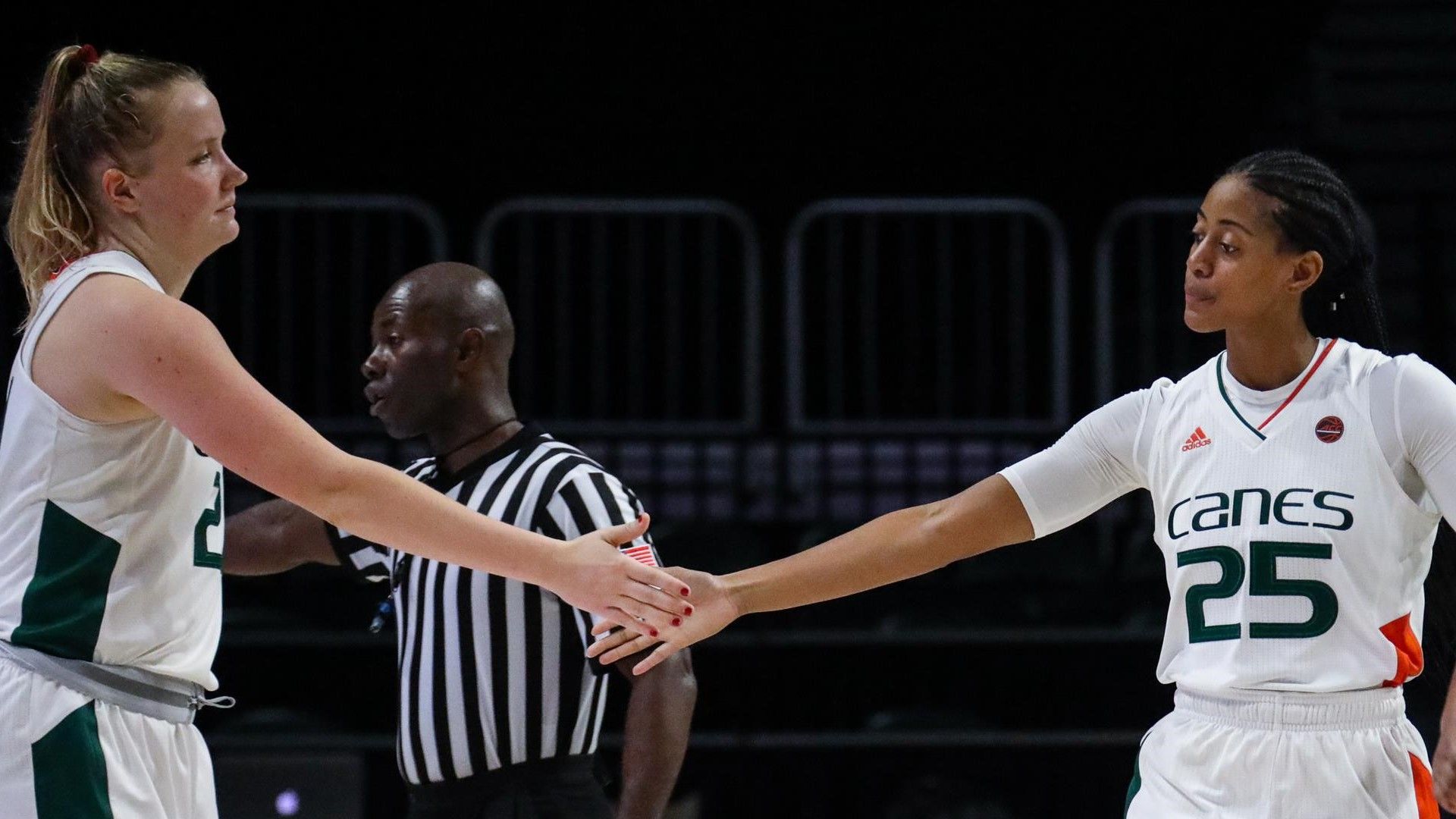 CORAL GABLES, Fla. – Playing on its home court for the first time in 12 days, the University of Miami women’s basketball team remained undefeated at the Watsco Center with a 103-54 victory over Florida A&M Friday night.

Senior forward/center Emese Hof notched game highs in points (22) and rebounds (10), as No. 24/23 Miami (12-2) reached the 100-point plateau in back-to-back games for the first time in program history.

“We are sharing the ball. It’s not like one player is scoring 30,” Miami head coach Katie Meier said of the offensive success. “We are getting 17, 11, 12—double figures, but nothing dramatic. You are seeing a lot of development and . . . we are playing with tremendous concepts right now offensively.”

It marked the third consecutive game Miami reached 50 points in the first half after not doing so once previously this season. Sophomore guard Kelsey Marshall tallied 17 points before the break, tying her season high for a full game and equaling the third-most in a half by a Hurricane this year.

The Hurricanes pushed their lead as high as 30 in the third period and took a 27-point cushion, 76-49, into the final session.

Miami concluded the contest on a 20-1 run over the final six minutes to earn the 49-point victory, its second by over 45 this season. The 103 points were its most since registering the same number on Dec. 16, 2011 against Louisiana-Monroe. Additionally, this is the eighth time the Hurricanes have posted two 100-point games in the same season, including the fourth time under Meier and first since 2011-12.

Hof finished 10-of-12 from the floor, the third time in her career she has done so, once again tying for sixth on Miami’s single-game field goal percentage list (minimum 10 FGA) and becoming the first Hurricane to achieve that feat three times. Additionally, she logged her fifth 20-point outing of the season, including her third in the last four games, and her fifth double-double this year.

Marshall finished with 17 points, two shy of her career high, and tied her career bests with four 3-pointers and six made field goals, the fourth time she has reached the former number in 2018-19. Redshirt junior forward Beatrice Mompremier amassed 17 points on 6-of-6 shooting and nine rebounds, just missing her 10th double-double of the year. Redshirt junior guard Laura Cornelius chipped in 11 points, while freshman forward Jamir Huston added a career-high 10 and sophomore guard Mykea Gray posted a career-high six assists.

After missing the last 50 games due to lower extremity injuries, redshirt senior forward Khaila Prather returned to the court Friday. It was her first time playing in a competitive game in 670 days, dating back to Feb. 26, 2017, the final regular season outing of the 2016-17 campaign.

Prather finished with a career-high eight points on 4-of-6 shooting to go along with two rebounds, two blocks and one assist in 14 minutes of action.

“It was so emotional and I had tears in my eyes, just when I subbed her in. She just played so fearlessly and was so active,” Meier said. “That is really hard for a player to be that active coming off of what she has been through. First play was, of course, the defensive play and then a nice run-out layup, which takes courage, too, to go full-court and make a layup. Our team is a heck of a lot better with her on it, that’s for sure.”

Miami went 22-of-32 from the free-throw line, setting season highs in both makes and attempts. The Hurricanes also recorded a season-best 16 steals, as four players had three-plus, and a season-high 10 blocked shots. Miami had a 34-6 edge in points off turnovers and a 50-20 advantage in points in the paint, while outrebounding the Rattlers, 47-34.

The Hurricanes will play their second and final game of the Miami Holiday Classic in the event finale Sunday at 4 p.m. against Central Michigan.

MIAMI HURRICANES POSTGAME NOTES
– Miami upped its winning streak against Florida A&M to five and improved to 13-9 overall in a series that dates back to 1973.
– The Hurricanes have scored 29-plus points in a period each of the last three games after previously doing so once all season.
– After making her first five free throws of the night, Cornelius missed her sixth to snap a streak of 23 consecutive makes dating back to 11/15/18 against No. 19 Marquette in the fourth game of the season.
– Hof and Mompremier have combined for 14 double-doubles across 11 of Miami’s 14 outings, while five different Hurricanes have totaled 13 20-point showing across 11 games, with Hof’s fifth the most on the team.
– Cornelius reached 200 made field goals at Miami, Hof reached 100 assists as a collegian, Mompremier eclipsed 750 points in her career, Gray reached 100 made free throws as a Hurricane and junior guard/forward Sarah Mortensen reached 50 made 3-pointers at Miami.