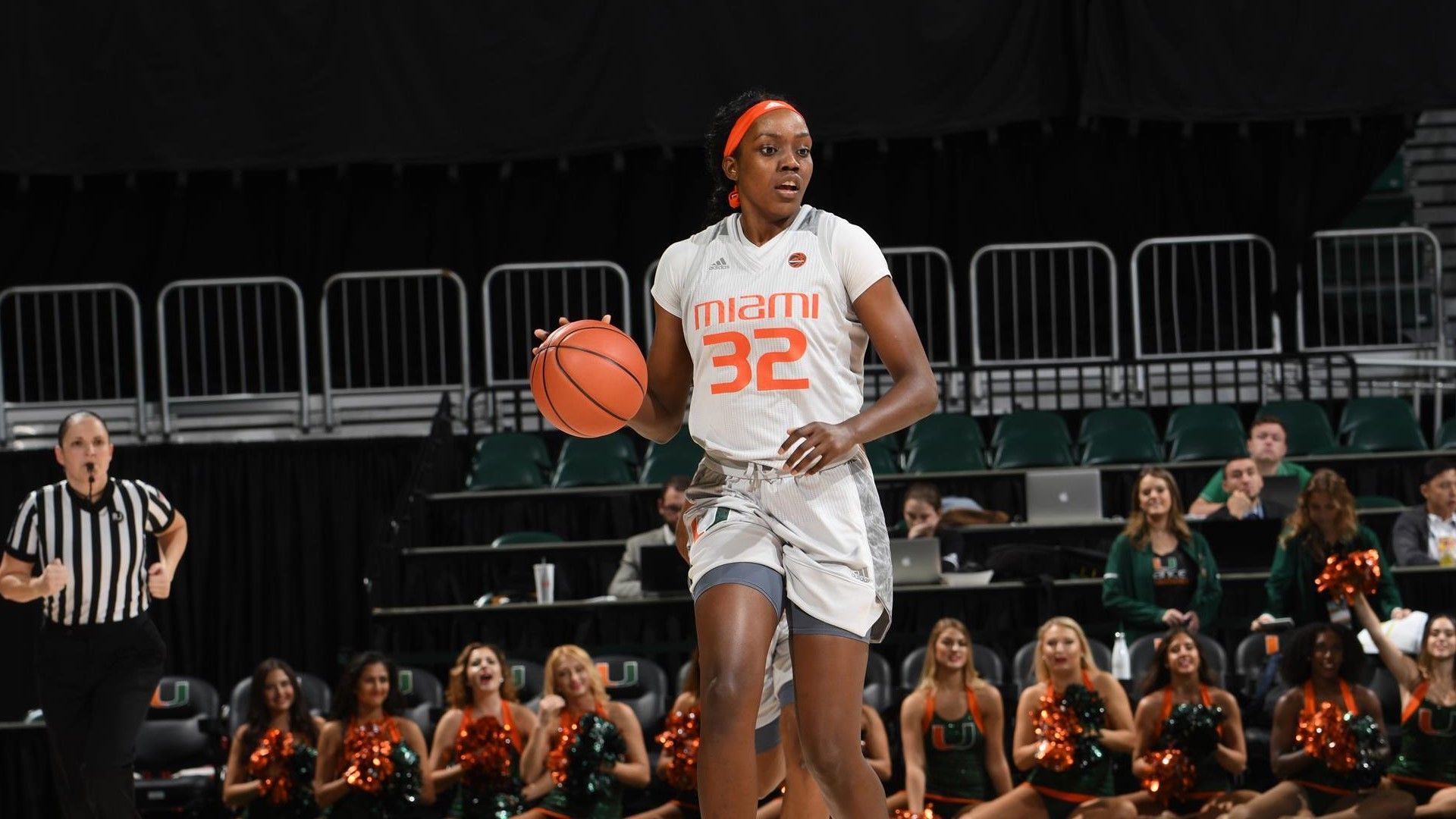 WINTER PARK, Fla. – For the second time in as many days at the Florida Sunshine Classic, the University of Miami women’s basketball team registered a dominant triumph over an SEC opponent.

“I think Alabama was flying at the ball, so we had to make the extra pass,” Miami head coach Katie Meier said of the offensive success. “Obviously, people are talking about our post players, but as good as they are, this weekend, our guard play was just perfect. They just really played with great pace and put the ball where it needed to go.”

Miami quickly jumped out to a 17-3 lead, holding Alabama (8-5) scoreless for the first 4:40 and notching the game’s first nine points. The Hurricanes held a 13-point lead, 22-9, when the first period ended.

Early in the second frame, Miami made three straight 3-pointers in a span of 65 seconds to take an 18-point edge, 31-13, with 8:04 left before the intermission. Alabama pulled back within 11, but the Hurricanes closed the frame on a 15-5 run, including hitting back-to-back 3-pointers, to hold a 55-34 advantage at the break.

Miami’s 55 points set a new season high for points in the first half, surpassing the 51 scored one day prior against Vanderbilt, and were just one shy of the high in any half. Additionally, the Hurricanes’ 33 points in the second quarter set a program record for most points in a period.

The Crimson Tide used an 8-1 run to trim the deficit to 14 in the third period, but got no closer. Miami scored the final seven points of the session to take its then-largest lead of the night, 77-50, into the last period.

Miami extended its lead as high as 28 points in the fourth quarter and never let Alabama get any closer than 22. The 27-point victory was the Hurricanes’ third-largest of the season and the fourth by 25-plus.

Mompremier finished with 17 points and a game-high 12 rebounds, tallying her ninth double-double of the season. Gray led Miami with 21 points, shooting 5-of-7 from 3-point range to tie a career high in makes, while adding a season-best six rebounds.

Cornelius tallied 20 points, six rebounds and five assists, as well as went 7-of-9 from the floor and 6-of-7 beyond the arc. Her six 3-point makes tied for the seventh-most in a game in program history—the fourth time she has reached that mark—and her 85.7 percent clip also ranked seventh (minimum four attempts).

Marshall notched 13 points and a season-high five assists, while Hof added 12 in the victory, giving Miami five double-digit scorers for the first time since Feb. 4, 2018 against North Carolina.

Cornelius, Gray, Hof and Mompremier were each named to the Florida Sunshine Classic All-Tournament Team, with Mompremier tabbed as the event MVP.

“What I thought was great tonight is that I ask our guards to rebound because the posts have had a huge burden and [they did so],” Meier said. “Our guards, if you totaled it up, [had over 20] of our rebounds and our posts were sharing the ball. Beatrice had three assists and Jamir [Huston] had four. So, it was fun because we inverted our game.”

Miami reached triple-digit points for the first time since Jan. 26, 2017 versus North Carolina and amassed its highest point total since scoring 103 on Dec. 16, 2011 against Louisiana-Monroe. This was the first time Miami notched 100-plus points away from home since Dec. 21, 2009 at Cornell.

“It’s nice when the ball is going in, but I think when you get on the road in the ACC, you just can’t assume that the ball is going to go in,” Meier said of her takeaways from the two games. “But there is something about this place—and the people at Rollins have been great—this is the second time I have been here and we have shot the ball very well. It’s just a lot of fun and it brings back the joy.”

The Hurricanes resume play with the Miami Holiday Classic, held Dec. 28-30 at the Watsco Center, opening with a matchup against Florida A&M at 7 p.m. on the first day of the event.

MIAMI HURRICANES POSTGAME NOTES
– The Hurricanes moved to 1-2 in their all-time series with Alabama, leaving just six SEC schools Miami does not own at least one victory over.
– In four career games at the Florida Sunshine Classic—two in 2015 against fourth-ranked Baylor and Indiana, as well as two this year against Vanderbilt and Alabama—Hof averaged 18.0 points on 29-of- 42 shooting (69.0 percent), adding 9.0 rebounds per game.
– After scoring 90 in the first game of the Florida Sunshine Classic, the Hurricanes’ 191-point total from the two games is it most in back-to-back contests since the aforementioned outing against Cornell and the next contest, Dec. 28, 2009, against Quinnipiac.
– Five different Hurricanes have combined for a total of 12 20-point showings across 10 of the team’s 13 games thus far.
– Cornelius eclipsed 200 rebounds as a collegian, Marshall surpassed 75 made 3-pointers at Miami, Mompremier moved past 300 made field goals in her career, Gray eclipsed 500 points as a Hurricane, Hof reached 150 made free throws as a collegian and junior guard/forward Sarah Mortensen surpassed 750 minutes played at Miami.