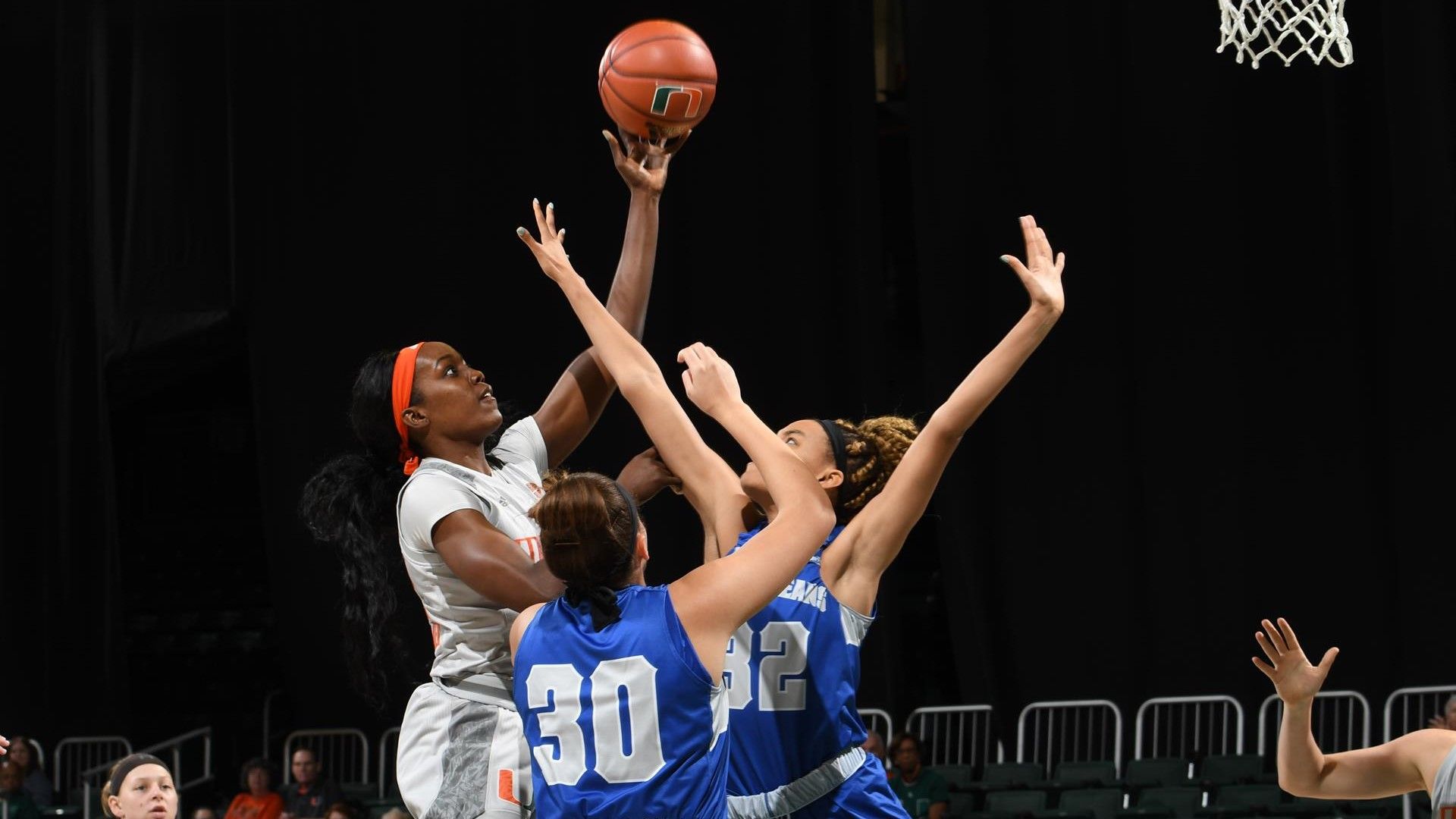 CORAL GABLES, Fla. – Following its longest break of the season thus far, the University of Miami women’s basketball team returned to the court with a dominant 78-38 victory over New Orleans Sunday afternoon at the Watsco Center.

Redshirt junior forward Beatrice Mompremier and senior forward/center Emese Hof both logged double-doubles in the same outing for the second time this season, but it was outstanding defense that led the charge for No. 25/23 Miami (8-2).

“When we’re dialed in [we are very good defensively] and we changed up defenses a lot,” Miami head coach Katie Meier said. “I thought that really made a difference in the game and it made a difference in our energy level. It gave us a few more possessions to have some fun.”

After the teams split the opening four points, Miami went on a 15-2 run, including scoring 12 straight points. The Hurricanes kept New Orleans (3-4) scoreless for a span of 5:58 and led, 19-6, when the first period concluded, marking their then-fewest points allowed in a quarter this season.

Miami used another long run, this time a 14-3 stretch with a 10-0 span, to extend its edge as high as 21 in the second frame. The lead sat at 17 points, 37-20, at the halftime buzzer, good for the second-fewest points the Hurricanes conceded in a half this year.

Meier’s team went 10-of-10 at the line in the opening half, tying their top total for makes in a half in 2018-19 and posting a perfect clip in a half for the first time this season.

The Hurricanes held New Orleans without a point for the first 6:52 of the second half, scoring 16 straight points to begin the session. Miami held the Privateers to just seven points in the period and took a 35-point cushion, 62-27, in to the last quarter.

In the finale, Miami made it four quarters with at least a 10-0 run against the Privateers and pushed its edge as high as 44, before closing with a 40-point triumph. New Orleans’ 38 points were the fewest Miami has conceded since giving up just 31 on Dec. 15, 2017 against Alabama State.

Mompremier led all players with 16 points and added 10 rebounds for her sixth double-double of the year. Hof tallied 10 points and 10 boards for her third of the season, as well as blocked two shots to reach 134 in her career and pass Jassany Williams for third place on Miami’s all-time list.

Sophomore guard Kelsey Marshall finished with 14 points and tied her career high with four 3-pointers. Junior guard/forward Sarah Mortensen registered 15 points, her second-most of the season, on 5-of-9 shooting from 3-point range and added a career-best eight rebounds in a career-high 25 minutes.

Along with have four double-digit scorers for the second time this season—the other was in the opener at FIU—sophomore guard Mykea Gray posted nine points and freshman forward Jamir Huston logged a career-best seven in a balanced scoring attack.

“I just couldn’t believe how we shared the ball. Twenty assists on 27 buckets, just so smart,” Meier said. “When Mort got hot, we gave her the ball. Laura [Cornelius] hit one and we went back to her. When Kelsey was hot, we went back to her. Our post entry passes are something we have to work on, but I thought our perimeter passing and finding and setting up [was great]. Our pace of play requires some sharing of the ball so that we’re not sucking the air out of the ball and eating it too much. We really shared it today.”

New Orleans posted the lowest total by a Miami opponent in points (38) and assists (seven), plus tied for smallest total in made 3-pointers (five). Additionally, the Privateers tied for the second-lowest marks in made field goals (13), field goal percentage (22.4), 3-point attempts (21) and free throw percentage (53.8).

The Hurricanes finished 14-of-17 (82.8 percent) at the free throw line, setting a season high in both makes and percentage. Miami had a 22-7 edge in points off turnovers, a 32-14 lead in points in the paint and a 15-2 cushion in second-chance points.

Sunday also made it 12 consecutive seasons the Hurricanes have held at least one opponent to fewer than 40 points in a game.

After another six-day layoff, the Hurricanes will cap their three-game homestand Dec. 16 at 1 p.m. against Maryland Eastern Shore.

MIAMI HURRICANES POSTGAME NOTES
– The Hurricanes defeated New Orleans for the second consecutive year and moved to 2-0 in the all-time series between the two sides.
– Prior to conceding both six points in the first quarter Sunday and seven in the third, Miami’s lowest point total allowed in a period this season was eight in both the first and third sessions 11/6/18 at FIU.
– The other two times the Hurricanes made 10 free throws in a half this season were 11/15/18 against No. 19 Marquette (second) and 11/23/18 versus Nebraska (first).
– Hof has now logged double-digit rebounds in three consecutive games, the first time she has done so in her career.
– Mompremier eclipsed 550 rebounds as a collegian, Hof surpassed 550 rebounds and logged her 50th start at Miami, while Gray eclipsed both 450 points and 150 made field goals a Hurricane.