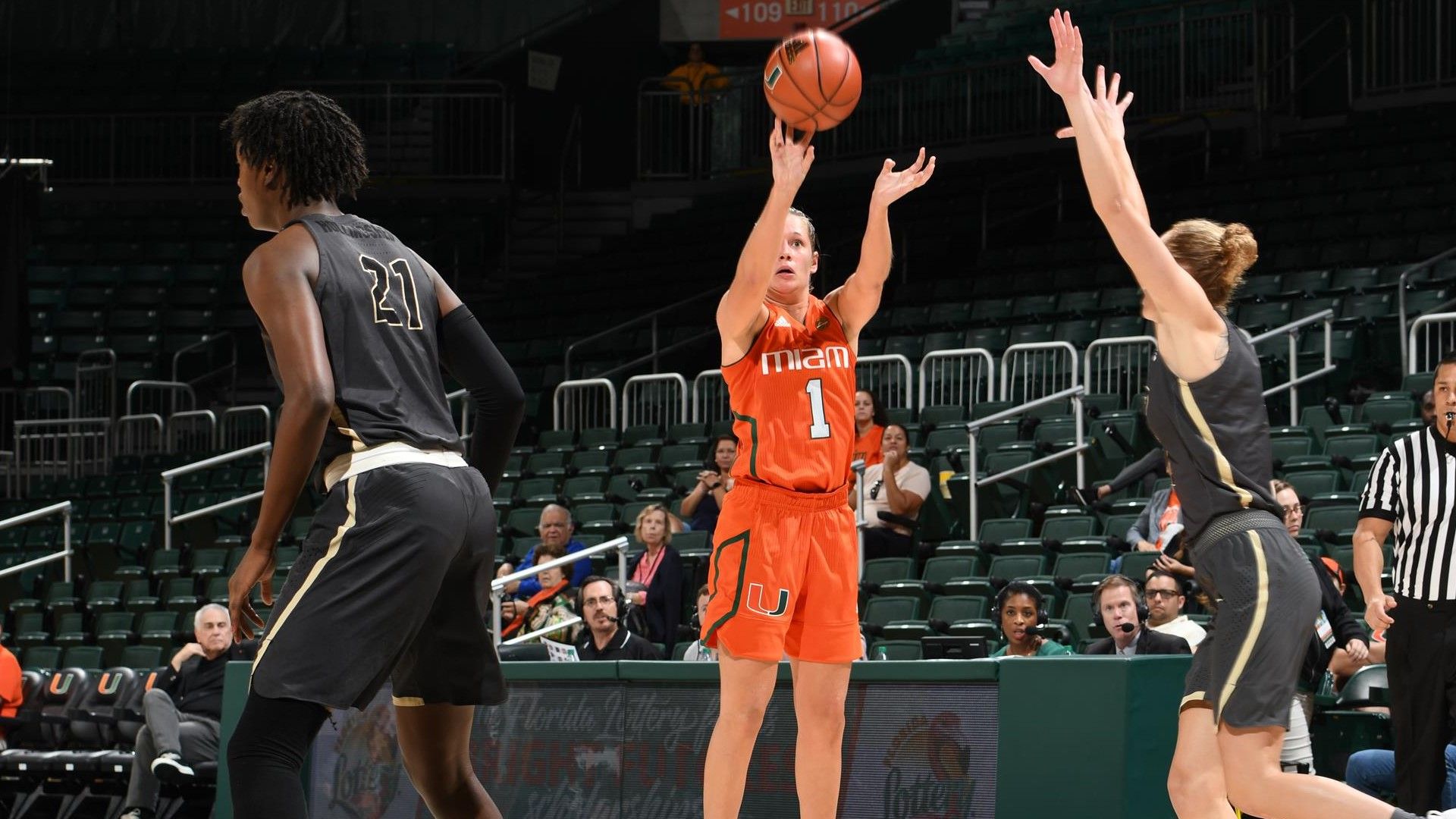 Redshirt junior guard Laura Cornelius registered a game- and career-high 26 points on 8-of-11 shooting to help No. 21/20 Miami (7-2) stay undefeated at home.

“She’s got to impose her will on the game at all times that she’s in. She’s playing so many minutes right now,” Meier said of Cornelius. “In this game, I thought her reads off the ball screens were phenomenal. Kennedy Leonard is a very good point guard and . . . and Laura did a very good job of defending her, as well. There was a lot on Laura’s plate. The biggest thing is she played 34 minutes and turned the ball over only once, but the rest of our team was turning it over like it was our job. We have to clean that up. Laura was the most reliable person on the court.”

Cornelius notched half of the game’s first 16 points, helping Miami build a 19-15 edge after a first quarter capped by sophomore guard Mykea Gray’s driving layup just before the buzzer.

After Colorado (6-1) took a 26-22 lead with 5:13 left in the second period, the Hurricanes scored seven straight points and ultimately closed the half on a 9-3 run to take a narrow 31-29 advantage into the intermission.

The Buffaloes retook the lead, 36-35, with 7:53 remaining in the third quarter. However, Miami quickly countered with a 13-1 run, including scoring 10 straight points, to take its then-largest lead of the game, 48-37, just over four minutes later. The margin sat at nine, 51-42, with one frame to go.

“I thought there was a shift in that third quarter where they came out and whatever Miami needed [they did, sophomore guard] Endia Banks being the example,” Meier said. “Mykea Gray had one of her better games of the year and I don’t know if her stats show it. She just was yelling at people and was really demanding. We had really good conversations with the team after the Purdue loss and I think it all showed up.”

Miami increased its advantage as high as 16 points in the fourth session and it never dropped below seven as it earned its sixth victory by 12-plus points this season.

In addition to scoring the most points by a Hurricane this season and tying her career high with eight made field goals, Cornelius finished the game 4-of-6 from 3-point range and 6-of-6 at the line. Her six makes at the line set a career high and her six attempts tied her top mark.

Redshirt junior forward Beatrice Mompremier finished with 15 points and eight rebounds for the Hurricanes. Emese Hof added seven points and 10 rebounds, giving her double-digit rebounds in back-to-back games for the second time as a collegian. The senior forward/center also blocked one shot to reach 132 in her career, tying Chanivia Broussard for fourth on Miami’s all-time leaderboard.

Freshman forward Peanut Tuitele paced the Buffaloes with 15 points in the defeat, while Alexis Robinson posted 13 and Leonard, a fellow senior guard, logged 12.

Leonard, a reigning First Team All-Pac-12 honoree, also recorded 13 assists, the most by a Miami opponent since Syracuse’s Tiana Mangakahia had 14 on Jan. 18, 2018. It was also the first double-digit assist outing by a Miami foe since No. 12 Florida State’s Nausia Woolfolk amassed 10 on Feb. 11, 2018.

The Hurricanes, however, did force Leonard into eight turnovers. Colorado finished with 19 as a team, tied for the second-most by a Miami opponent and one shy of the high mark.

After a six-day layoff, the Hurricanes will play the middle game of their three-outing homestand Dec. 9 at 1 p.m. against New Orleans.

MIAMI HURRICANES POSTGAME NOTES
– The Hurricanes, facing Colorado for the second year in a row after never previously meeting the Buffaloes, moved to 1-1 in the all-time series.
– Sunday was just the fourth time in program history the Hurricanes have hosted a Pac-12 team and the second time Miami has defeated a Pac-12 school in Coral Gables.
– In partnership with adidas and Parley for the Oceans, Miami wore uniforms Sunday featuring repurposed and upcycled materials, while a check for $31,515.56 was presented to UM’s Rosenstiel School of Marine and Atmospheric Science Dean Roni Avissar from the Miami football Parley jersey auctions.
– Five Hurricanes have combined for eight 20-point outings in seven different contests through Miami’s first nine games, with Cornelius the third player to reach that figure twice.
– Gray surpassed 50 steals as a Hurricane, Hof moved past 850 points in her career and Banks eclipsed 1,000 minutes played at Miami.