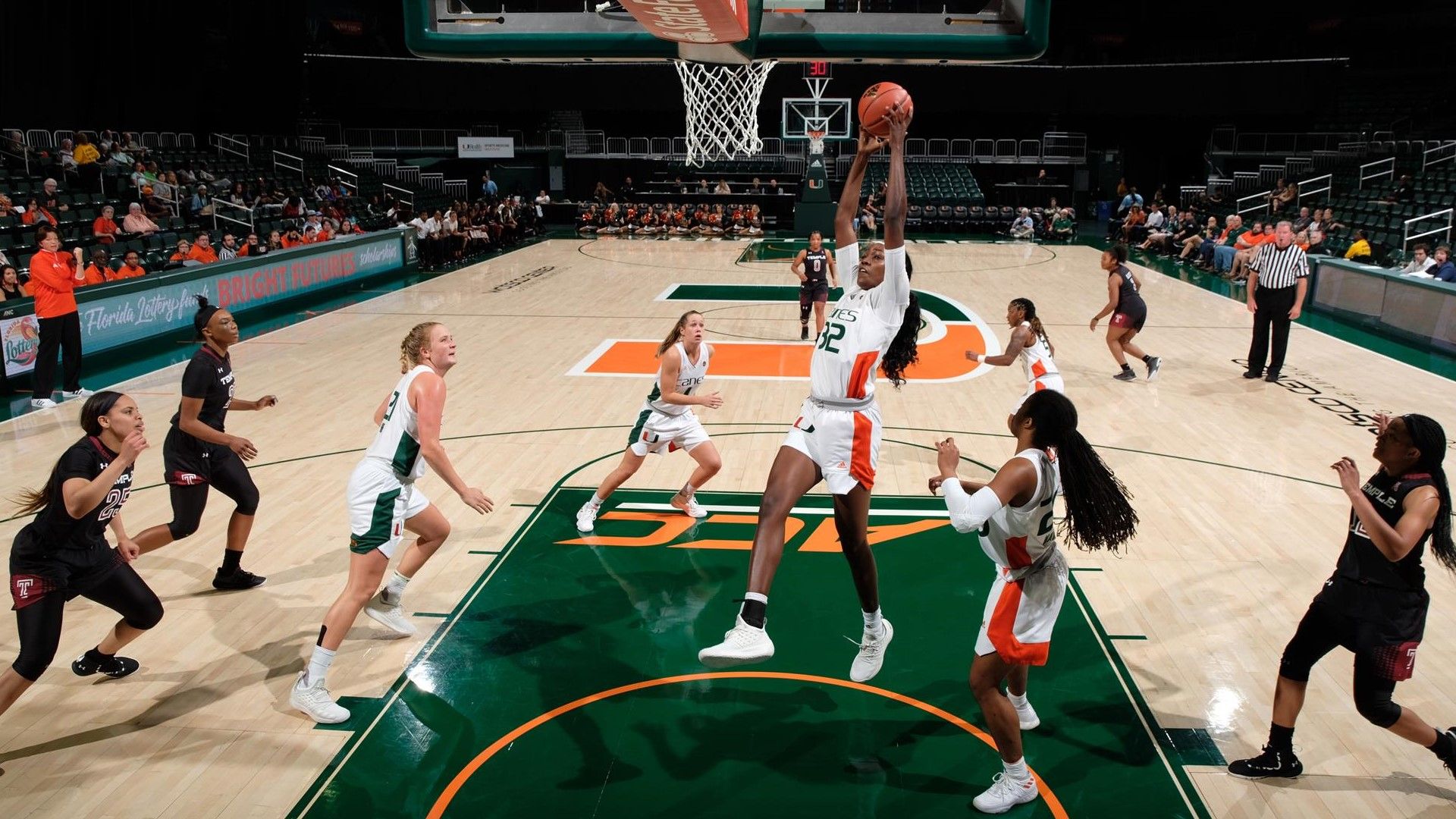 CORAL GABLES, Fla. – The University of Miami women’s basketball team concluded the Miami Thanksgiving Classic with a 73-61 triumph over Temple Sunday afternoon at the Watsco Center.

Redshirt junior forward Beatrice Mompremier led the way for No. 24/22 Miami (6-1) with her fifth double-double of the season, tallying 18 points, a game-high 12 rebounds and a career-high-tying four assists.

“Her competitiveness [stood out today]. She made huge plays,” Miami head coach Katie Meier said of Mompremier. “She passed up a couple jumpers when she was a little tired, she hit a three and she got a huge offensive rebound when they cut the game. She’s just so competitive. It’s just so fun to watch.”

After making their first three 3-pointers of the game, the Hurricanes missed their final six in the opening frame and held just a three-point lead, 17-14, through 10 minutes.

Miami made its final four shots of the second period, including back-to-back 3-pointers to cap the stretch, while Temple (2-4) missed six of its last seven, helping the Hurricanes take a nine-point edge, 36-27, at the break.

The Owls shot just 10-of-36 (27.8 percent) in the first half, including 3-of-16 (18.8 percent) from beyond the arc. It marked the third time in seven games Miami has held its opponent below 30 percent from the field before halftime.

The Hurricanes extended their cushion up to a then-game-high 11 points in the closing minute of the third session and led by 10 points, 55-45, with one quarter remaining.

Temple cut the deficit to six, 56-50, with 6:55 to go, but never got any closer and Miami improved to 5-0 at home this season. The 12-point margin of victory was also the Hurricanes’ largest lead of the day and marked their fifth victory by at least a dozen this season.

“We were really actually prepared for this to be a tough game. We thought it would it be like a street fight,” Meier said. “We knew that they were a really aggressive team and we really loved how quick they were to the ball, how they really get downhill very quickly. We knew we would have some foul trouble because they have a great burst . . . I think we’re going to be really happy with this win.”

Kelsey Marshall finished one point shy of Mompremier, the Miami Thanksgiving Classic MVP, for the team scoring lead, registering 17 points on 6-of-9 shooting. The sophomore guard went 4-of-6 from 3-point range, tying her career high in made 3-pointers for the second consecutive day.

Temple sophomore forward Mia Davis led all scorers with 19 points, while graduate student guard Alliya Butts added 18. No one else on the Owls had greater than six points.

The Hurricanes finished 9-of-19 (47.4 percent) on 3-pointers, connecting on five in a row after the six straight misses to close the first period. Meanwhile, the Owls were 8-of-31 (25.8 percent) from long range.

Miami resumes play Thursday at 7 p.m., when it squares off with Purdue in West Lafayette, Ind., as a part of the ACC/Big Ten Challenge.

MIAMI HURRICANES POSTGAME NOTES
– In the teams’ first meeting since 1989, Miami picked up its fourth consecutive victory over Temple and moved to 4-1 in the all-time series.
– The Hurricanes improved to 24-2 in Miami Thanksgiving Classic/Tournament play during Meier’s 14-year tenure—the event has taken place each year except 2011-12—and went 2-0 for the 11th time.
– One minute and 15 seconds into the third period, Mompremier attempted the first 3-pointer of her collegiate career and made it.
– Mompremier and Cornelius were joined on the Miami Thanksgiving Classic All-Tournament Team by Temple’s Alliya Butts, Nebraska’s Ashtyn Veerbeek and Radford’s Destinee Walker.
– Mompremier eclipsed both 650 points and 50 assists in her career, Hof played in her 100th game as a Hurricane, Cornelius surpassed 200 assists at Miami and sophomore guard Taylor Mason moved past 50 free-throw attempts as a collegian.