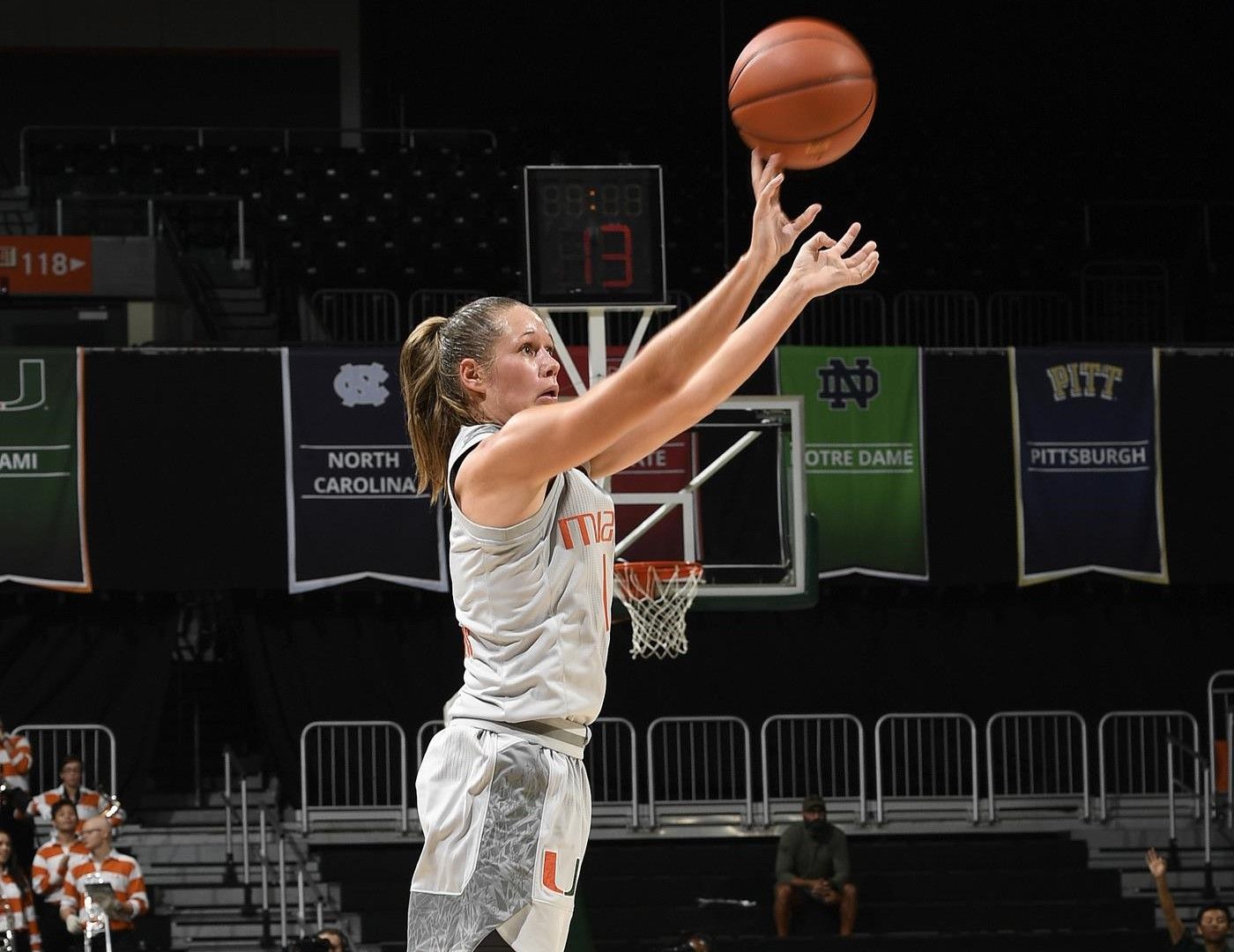 CORAL GABLES, Fla. – The University of Miami women’s basketball team got back to its winning ways Friday afternoon at the Watsco Center, recording an 82-68 victory over Nebraska in the Miami Thanksgiving Classic.

“I really got on them about just competing. When you are on a basketball court, there is no worry. Everything is something to gain,” Miami head coach Katie Meier. “I felt like we played a little bit worried the last time we were together. I just challenged the competitors in each one of them. I really told them to get on the balls of their feet and compete and do the little things and the big things will work out for you—and it really did.”

Cornelius closed the second quarter on a personal 10-0 run, including hitting back-to-back 3-pointers to reach 100 in her career, to give Miami a commanding 44-25 advantage at halftime.

The Groningen, Netherlands, native tallied 18 points in the first half alone—eight above her prior season high—while Mompremier logged 13 points and seven rebounds before the break.

“Her first half was perfect. I don’t think Laura did one wrong thing in the first half. I thought she was phenomenal,” Meier said. “In the second half—she knows how to protect a lead and . . . her tempo control, the veteran player in her just kind of took that game over. So, she didn’t need to score as much in the second half, but that driving layup she had to answer was really important.”

Miami conceded zero second-chance points and just two points off turnovers in the first half, while totaling nine and 15, respectively.

The Hurricanes stretched their cushion to 22 points on three occasions in the third quarter. The Cornhuskers, though, closed it on an 11-2 run to make it a 13-point game, 62-49, with 10 minutes left.

Nebraska opened the final period with a 3-pointer to make it a 14-2 run and pull within 10. However, Miami never let its lead fall to below double digits, stretched it all the way back as high as 20 and posted its fourth win by 13-plus points on the young season.

Cornelius led all players in points, assists and steals, as well as finished one shy of her career high in points, rebounds and assists. Her six steals doubled her career high and were the most by a Hurricane since Erykah Davenport reached that number on Jan. 25, 2018 against fourth-ranked Louisville. She also matched her career high with five made free throws.

Mompremier finished 8-of-11 from the field to notch her second straight 20-point home outing and also led all players in rebounding. Sophomore guard Kelsey Marshall totaled 16 points, three off her career best, setting new career highs in field-goal attempts (14) and minutes (31), as well as equaling her top mark in made field goals (six) and made 3-pointers (four).

“We had to change our schemes a lot, they have so many players and they present so many different lineups, as big as they are. In the second half Kelsey got hot and I could take [sophomore guard] Endia Banks and play her at the four and go small,” Meier said “Oh boy, did we really free up our shooters in that moment. So, that was a lot of fun . . . Their schemes on defense, they couldn’t stay in them. Our double-big lineup was great, but then us changing and going small really opened it up.”

Miami finished with a 44-35 edge in rebounding, including a 17-9 advantage offensively, as three Hurricanes grabbed seven-plus boards and no one on Nebraska eclipsed five.

The Hurricanes will be back in action Sunday at 2 p.m., when they face Temple in the Miami Thanksgiving Classic finale. Two hours prior to that, Nebraska squares off with Radford in the first game of the day.

– Facing one of just two teams on its 2018-19 regular season schedule it has played multiple times without previously defeating, Miami earned its first victory over Nebraska and moved to 1-3 in the all-time series.
– Miami trailed for a total of just 39 seconds against the Cornhuskers, marking the third time this season the Hurricanes have trailed for under one minute.
– Friday’s contest was the third in a six-game stretch of matchups with opponents from a major conference (Power Five, BIG EAST and AAC).
– Five different Hurricanes have combined for six 20-point games this season: junior guard/forward Sarah Mortensen (24 at FIU), sophomore guard Mykea Gray (25 vs. Stephen F. Austin), senior forward/center Emese Hof (21 vs. Hartford), Mompremier (24 vs. No. 19 Marquette and 20 vs. Nebraska) and Cornelius (23 vs. Nebraska).
– Cornelius eclipsed both 100 made 3-pointers and 50 made free throws in her career, while Marshall surpassed 300 points, 100 made field goals 750 minutes played as a Hurricane, as well as reached 50 assists.