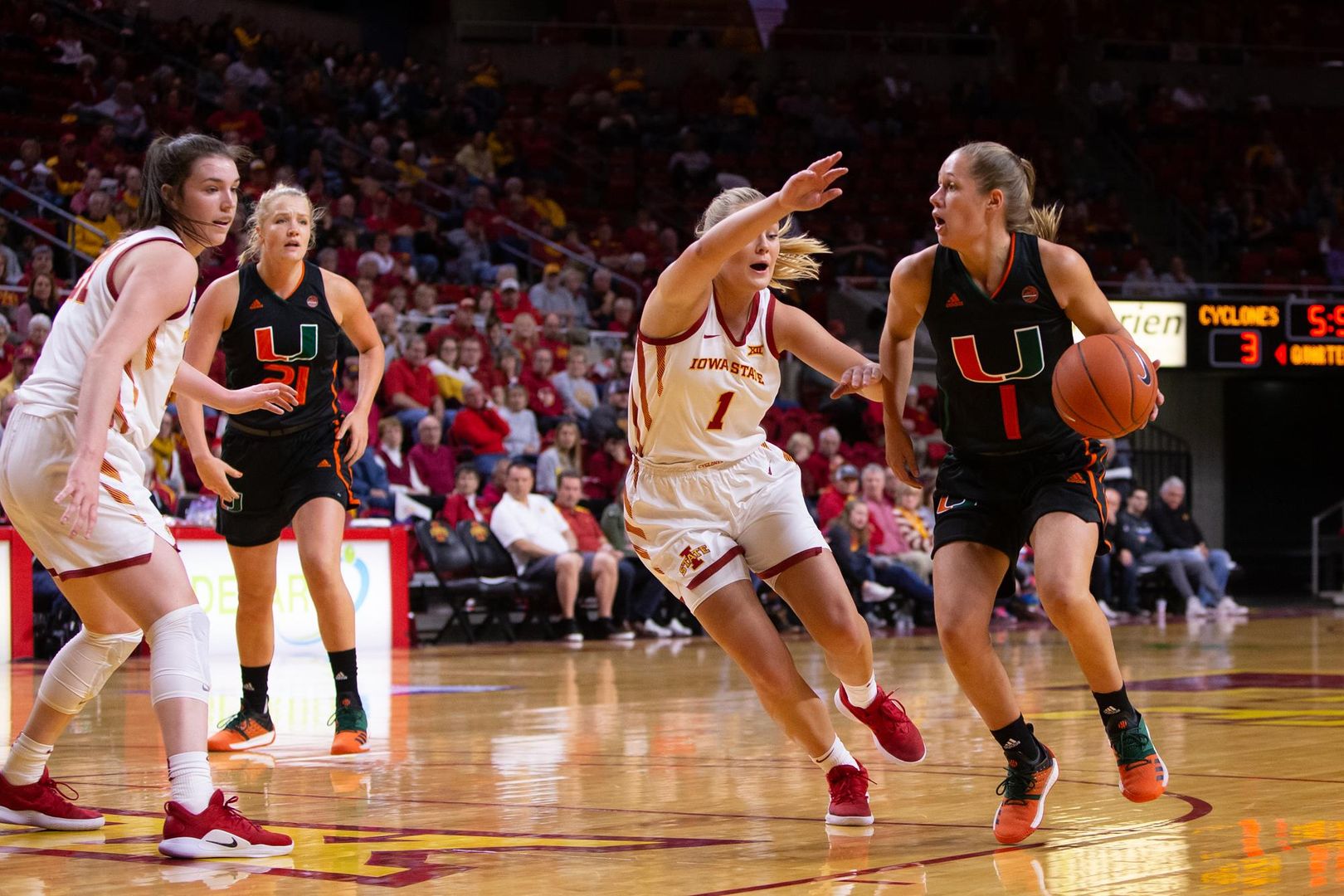 “They outperformed us in every category, more so both mentally and emotionally, just being connected and dialed in,” Miami head coach Katie Meier said of the Cyclones. “They were highly focused and committed to the game plan. They really rattled us and we really didn’t handle it well.”

Iowa State (4-0) went on a 12-0 run late in the first period before a buzzer-beating basket by sophomore guard Endia Banks ended the span and cut Miami’s deficit to six, 24-18, through 10 minutes.

With both sides entering the game top-35 nationally in field goal percentage defense, each posted a scoreless streak of over four-and-a-half minutes during the second frame. The teams combined for just 22 points in the quarter with the Cyclones ending it on a 7-0 run to take a 37-27 lead into the locker room.

The Cyclones upped their advantage to 15 points in the third quarter and led by that margin, 54-39, with one period to go.

Iowa State made six straight shots during the fourth session to seal the game, as the Hurricanes, in the 1,300th game in program history, were unable to mount a large, late rally.

Senior forward/center Emese Hof finished one rebound shy of a second straight double-double, with a team-best 14 points and game-high nine rebounds. The Utrecht, Netherlands, native also totaled a game-best five blocks, marking the second time on the young season she has reached that figure. Sophomore guard Taylor Mason tied a career high with nine points in the defeat.

Iowa State, which moved to 155-5 in regular season home non-conference games during head coach Bill Fennelly’s 24-year tenure, outscored Miami, 22-9, in points off turnovers and 38-22 in points in the paint.

“I think we better learn that we better use the pass as a weapon. That’s the worst sharing of the ball all year so far for us,” Meier said. “We’ve been at about 68 percent of our points assisted going into this and Iowa State invited us to dribble and we did. We never did the secondary action behind the penetration, so we got stuck . . . at the rim the whole night. It was a frustrating for everybody, but [it will be] more frustrating when we watch the film and we realize that the extra pass was there and we just chose not to make it.”

Hof and redshirt junior Beatrice Mompremier were both among the six players named to the Preseason WNIT All-Tournament Team.

The Hurricanes will now return home to Coral Gables, Fla., where they will host the Miami Thanksgiving Classic. Action begins Friday at 1 p.m. with Radford playing Temple, followed by Miami facing Nebraska at 3 p.m.

MIAMI HURRICANES POSTGAME NOTES
– Iowa State was the second consecutive team Miami played it has never previously faced, as well as one of three new opponents on the Hurricanes’ 2018-19 regular season schedule.
– All four Miami frontcourt players who appeared in the first half—Hof, freshman Jamir Huston, Mompremier and junior Sarah Mortensen—tallied two fouls, with the latter two not playing at all in the second period.
– Sunday’s game was the first time Miami has played in front of over 10,000 fans since Jan. 15, 2017 at No. 9/8 Louisville (10,016) and the largest crowd the Hurricanes have played in front of since March 7, 2013 in Greensboro, N.C. in the ACC Tournament against Virginia Tech (11,359).
– Hof and Mompremier were joined on the Preseason WNIT All-Tournament Team by Iowa State’s Carleton (MVP) and Madison Wise, Marquette’s Allazia Blockton and Auburn’s Janiah McKay.
– Mompremier both played in her 75th game and surpassed 600 rebounds as a collegian, while Hof eclipsed both 800 points and 500 rebounds at Miami and Mason moved past 500 minutes played in her career.