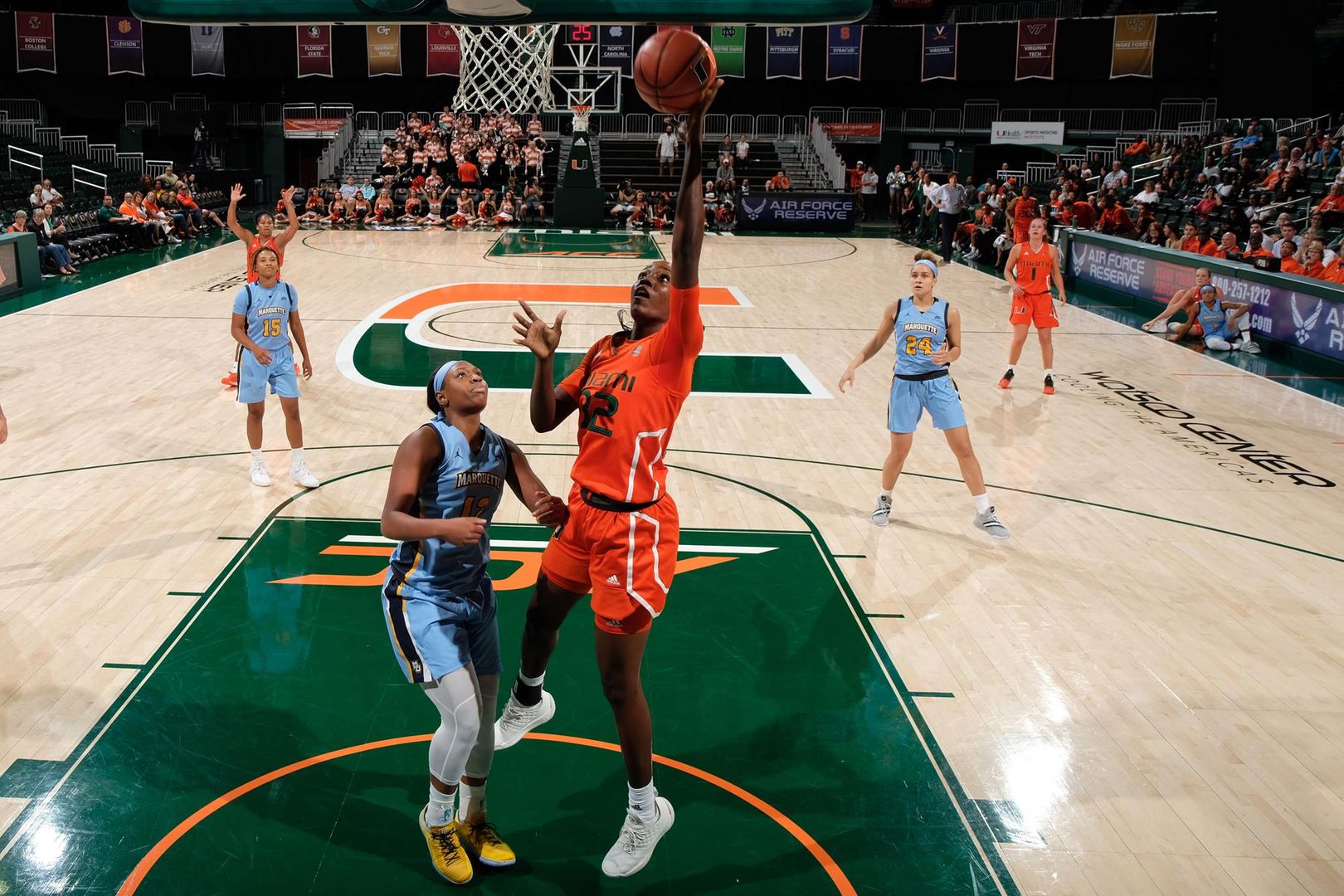 Behind redshirt junior forward Beatrice Mompremier’s career highs in points (24), rebounds (21), made field goals (10) and minutes (34), No. 24 Miami (4-0) locked up a spot in the Preseason WNIT championship game in its first appearance in the prestigious tournament.

“I thought there were some moments in the first half and early in the third quarter . . . where we were really smart and moved the ball really sharply. I was pleased with it,” Miami head coach Katie Meier said. “I think we got tired, to be honest. I think Marquette’s pace of play, constantly threatening you in transition—our bigs were playing heavy minutes and our guards were chasing people all over the court, so at the beginning of the fourth quarter I think we got tired.”

The Hurricanes’ stingy defense continued into the second quarter, as the Golden Eagles had a stretch during which they went 1-of-9 and missed six straight shots. In the same span, sophomore guard Kelsey Marshall made a pair of 3-pointers to put Miami up a dozen, 28-16. A 6-2 run by Marquette to close the half made it 30-22 at the intermission.

Marquette shot just 25.7 percent (9-of-35) in the first half, their lowest clip in a half this season, while Mompremier nearly posted a double-double in the opening 20 minutes alone, tallying 14 points and eight rebounds.

Buoyed by a 7-0 run early in the period, Miami stretched its lead to 16 points, 49-33, with 5:10 left in the third quarter. However, Marquette responded with nine straight points to pull within seven and trailed by nine, 54-45, entering the final session.

The Golden Eagles trimmed the deficit all the way to one, 56-55, with a 4:55 to play, but Miami held them without a point the rest of the game. The Hurricanes snapped a scoreless drought of 7:10 with 53 seconds left, tallying seven points in the final minute to seal the victory.

“I liked our defensive rebounding because they [chipped away at] the lead by getting us in foul trouble in that third [period],” Meier said of the way Miami responded to Marquette pulling within one. “They got a lot of free throws in that third and the clock stopped. They got to reset their stuff and they got to set their presses because we were just fouling too much. Our scout to the personnel, I think was really important, and [so was] our defensive rebounding.”

Along with Mompremier posting her third double-double in four games as a Hurricane, senior forward/center Emese Hof logged her first of the season, finishing with 10 points and 10 rebounds. It was the first time Miami had two double-doubles in a game since Feb. 18, 2018 at Virginia.

Mompremier set a Preseason WNIT rebounding record, tied for the fourth-most rebounds in a game in program history and became the sixth different Hurricane—ninth occurrence—to log 20 boards, including the first since Tamara James did so on Nov. 22, 2002 against USF. That outing by James, Miami’s all-time leading scorer, was also the last 20-point, 20-rebound game by a Hurricane, as Mompremier is the first to do so in the ACC era, which dates back to 2004-05.

“The best play she had was the steal at midcourt after she missed the free throw. The level of competitiveness in Bea [was amazing], she was doing whatever,” Meier said. “She missed a couple point-blank huge moments [or else] the game wouldn’t have gotten to one. She was frustrated with herself, so it was kind of fun to see her figure out another way to help Miami win.”

The Golden Eagles, who have five 1,000-point scorers and entered the night averaging 97.7 points per game, finished with 36 fewer points than they did in any of their first three games. It was their lowest total since also posting 55 on Dec. 2, 2017 at Green Bay. Marquette also shot roughly half its season average, finishing at 28.6 percent (20-of-70) after entering at 55.0 percent.

Miami finished with a 56-41 edge in rebounding in a matchup of familiar head coaches. Marquette’s Carolyn Kieger spent seven years working for Meier at Miami, including six as an assistant coach.

The Hurricanes will now head to Ames, Iowa, where they will play Iowa State Sunday at 4:30 p.m. ET in the Preseason WNIT title game.

MIAMI HURRICANES POSTGAME NOTES
– This was the first meeting between the Hurricanes and Golden Eagles, with Marquette the first of three opponents on Miami’s 2018-19 schedule it has not played before.
– Along with Kieger, three additional Marquette staff members spent multiple years working for Meier at Miami: Pam Brown (2007-09), Vernette Skeete (2009-12) and MaryLynne Schaefer (2011-14).
– Four different Miami players have eclipsed 20 points in a game through the first four outings of the season: junior guard/forward Sarah Mortensen had 24 at FIU, sophomore guard Mykea Gray tallied 25 against Stephen F. Austin, Hof posted 21 versus Hartford and Mompremier logged 24 Thursday.
– Sophomore guard Kelsey Marshall tied a career best with eight rebounds, all of which came in the first half, and played a career-high 30 minutes.
– Mompremier eclipsed both 600 points and 250 made field goals in her career, sophomore guard Endia Banks surpassed 100 assists as a Hurricane and sophomore guard Taylor Mason moved past 100 points at Miami.