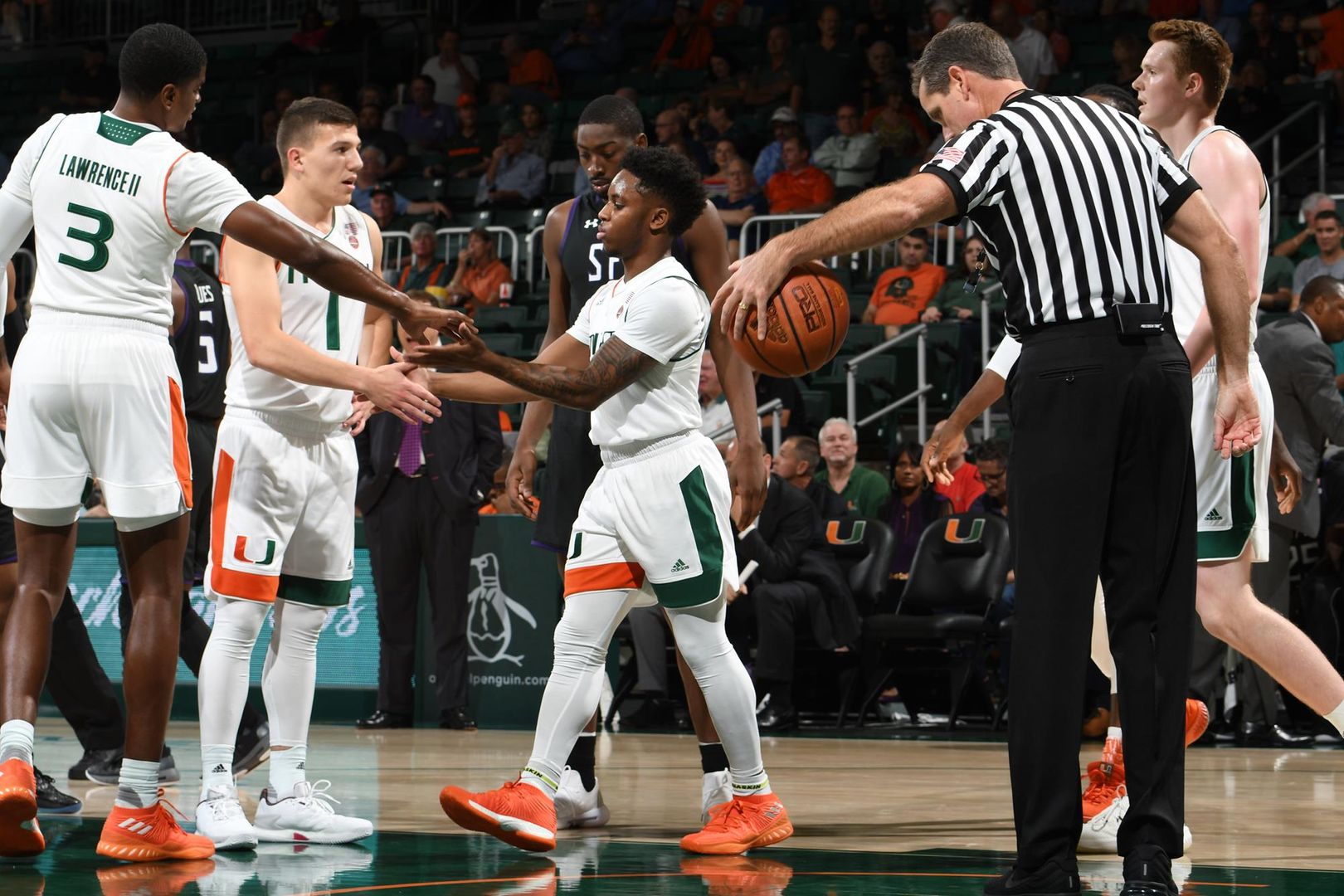 Izundu was joined in the stat sheet by four other Hurricanes who recorded at least 15 points, most closely followed by Chris Lykes. For the second consecutive game, the sophomore guard tallied at least 20 points, finishing the night with 20 points and a game-high six assists.

Shooting 8-of-12 from the field, senior guard Anthony Lawrence II finished the contest with 18 points, while junior guard Dejan Vasiljevic knocked down a game-high four 3-pointers to finish the night with 17.

Senior guard Zach Johnson registered eight of his 15 points in the second half, while pulling down four boards and dishing out a quartet of assists.

Miami (2-0) shot 56 percent from the field and hit 11-of-23 from 3-point range while limiting SFA (2-1) to 40 percent shooting from the field. UM did not commit a turnover in the first half and finished with just eight miscues. SFA committed 19 turnovers, leading to 30 Miami points.

Following an exchange of baskets in the opening two minutes, a layup by Izundu at the 17:39 mark gave the Hurricanes a lead they would not look back on for the remainder of the night.

Leading 4-3, Lykes went one-on-one with a defender at the top of the key. Making multiple shifty moves, the sophomore went strong at the basket earning an and-one opportunity. Converting from the charity stripe, Lykes placed the Hurricanes in front by four.

Answering a 3-pointer by Stephen F. Austin’s Shannon Bogues, Lawrence jump started a 19-5 run that gave the Canes a commanding 30-13 lead. Individually, Vasiljevic went on a personal 9-2 run over the span of 1:19, consecutively knocking down a trio 3-pointers.

Overall, the Canes closed out the final 13:16 of the period on a 39-22 run with Lawrence’s 13 points leading a trio of Canes in double figures. Izundu closed out the half with 12 points and 11 rebounds, tied for the fourth most rebounds in a half in the program’s ACC era (dating back to 2004-05), while Lykes closed out the frame with 10 points and five assists.

Leading 53-32 at the break, Miami scored its most points in any half dating back to a 55-point second half explosion at Virginia Tech on March 10, 2016.

The 96 points were the most by the Hurricanes since head coach Jim Larranaga’s squad topped the century mark at the 2016 Puerto Rico Tip-Off game against Mississippi State, 105-79, on Nov. 19.

The Hurricanes will return to the Watsco Center on Saturday, as they are set to host Bethune-Cookman at 2 p.m. The game will be broadcast live on ACC Network Extra.

Miami Game Notes – Stephen F. Austin Game
• Miami scored its most points since a 105-point effort against Mississippi State on Nov. 19, 2015.
• Ebuka Izundu recorded his second career double-double with 22 points and 19 rebounds. Both totals are career highs, as were his four blocked shots.
• Izundu was the first UM player to record at least 15 rebounds in a game since Kamari Murphy had 15 against Duke on Jan. 21, 2017.
• Chris Lykes also scored 20 points, two off his career high, set in the season opener against Lehigh.
• Miami posted its largest margin of victory since a 38-point triumph (94-56) at North Florida on Nov. 16, 2016.
• Leading 53-32 at the break, Miami scored its most points in any half dating to a 55-point second half explosion at Virginia Tech on March 10, 2016.
• Anthony Lawrence II played in his 100th career game.
• Miami did not commit a turnover in the first half. It marked the Canes’ first turnover-free half since the first half against Virginia Tech on Feb. 15, 2014.
• Junior forward Dewan Hernandez was withheld from competition for the second straight game as the University and the NCAA review his eligibility.
• For the second straight game, five Miami players scored in double figures – Izundu (22), Lykes (20), Lawrence (18), DJ Vasiljevic (17) and Zach Johnson (15).
• Miami hit 11-of-23 3-pointers and has connected on 25 3-pointers in its first two games.
• Deng Gak scored his first career points with a second-half field goal.
• Miami did not trail in the game.

Miami Head Coach Jim Larrañaga
On Ebuka Izundu’s focus inside…
“You know, I think he plays like that all the time. Except sometimes he [doesn’t] look to score, not as aggressive, but today, he was aggressive from start to finish. He was looking to catch the ball and his teammates were looking for him so it was very nice, I love to see him play that way.”

On an overall good offensive performance…
“You score 96, you give up fifty something, it’s a good night at both ends of the court.”

On Ebuka Izundu…
“Ebuka was terrific. He was very aggressive at both ends, blocking shots, defensive rebounds, his little jump hook inside; he has a wonderful touch. Some of those shots he makes, he makes almost look like they are routine, but they are not. You saw Deng (Gak), when he got in there, it wasn’t so easy for him. But, he is young, he is learning, and we need to work with him on some of those finishes; he and Sam (Waardenburg) had opportunities to score around the rim. It was very nice to have Ebuka not only score 22, but they have him listed at 17 rebounds and our staff thinks he had more.”

On Ebuka Izundu’s improvement in the offseason…
“Well, he played tonight like he normally plays when we are in the state of North Carolina. If you watch his game against North Carolina State in the last several years, or at Chapel Hill last year, or at Notre Dame last year, he is always been very very capable. He is much stronger now, I don’t know if you can notice that, but he doesn’t get moved easily and I think his teammates are very very confident in him.”

On Zach Johnson’s aggressiveness…
“The last game, I didn’t think he was as aggressive as we need him to be, and then last night I text him: ‘Just play like you practiced’. Because yesterday, he was sensational yesterday in practice. You look at him and it’s like ‘oh my goodness,’ he is shooting and handling and defending. And creating shots for others, creating shots for himself and then I thought he played that way tonight. I think actually we need to check his assists because I think he had more than they had him recorded for.”

On what he knows about the team after two games…
“Well, I’d like to explain how scheduling works. You have a 30-game schedule during the regular season and you have 12 non-conference games. What we try to do in the non-conference, is play the high-major opponents and teams that come from a variety of leagues that we think will do very well in their own conference. So Stephen F. Austin is picked to win the Southland Conference. Lehigh is picked to win the Patriot League. We’re going to play Bethune Cookman on Saturday, they’re picked to win the MEAC. Then the next games are in California and now we’re looking to play high-major teams. We play La Salle, that’s Atlantic 10. On our side of the bracket is a Northwestern, a Seton Hall, a Utah. We have a lot of high-major teams from the BIG EAST, from the Big 10 and from the Pac-12. That gives us the balance where you’re playing against teams from what is called the Mid-Major, but are supposed to be really good in their conference and high-majors, which are supposed to be the power teams. That balance should prepare us for an at-large bid to the NCAA Tournament, should we not win the ACC Tournament.”

Miami Senior Center Ebuka Izundu
On what lit the fire under him for this game…
“[Head] coach [Jim Larrañaga] was getting to me in practice for the last two days to be confident and just try to score every time I touch the ball and that’s what I did today.”

On finding early opportunities…
“Yes. Thanks to my teammates for getting me the ball early and every time. I just kept scoring.”

On his final numbers…
“I mean, I think I did well, but I think there is plenty more to come from this.”

On what he did in the offseason…
“I worked on everything, but basically getting strong and trying to get my endurance up. I just worked out every day in the mornings and twice a day, and all that.”

On a good opportunity to play with Dewan Hernandez out…
“I’m going to play regardless if Dewan is here or not. I don’t worry about starting or not. I just want to play and that’s it. It doesn’t matter.”

On how the team looked…
“I think we looked really good the whole game. I was really proud of us because we didn’t have any turnovers in the first half. We just came out stronger and kept punching them in the whole game.”