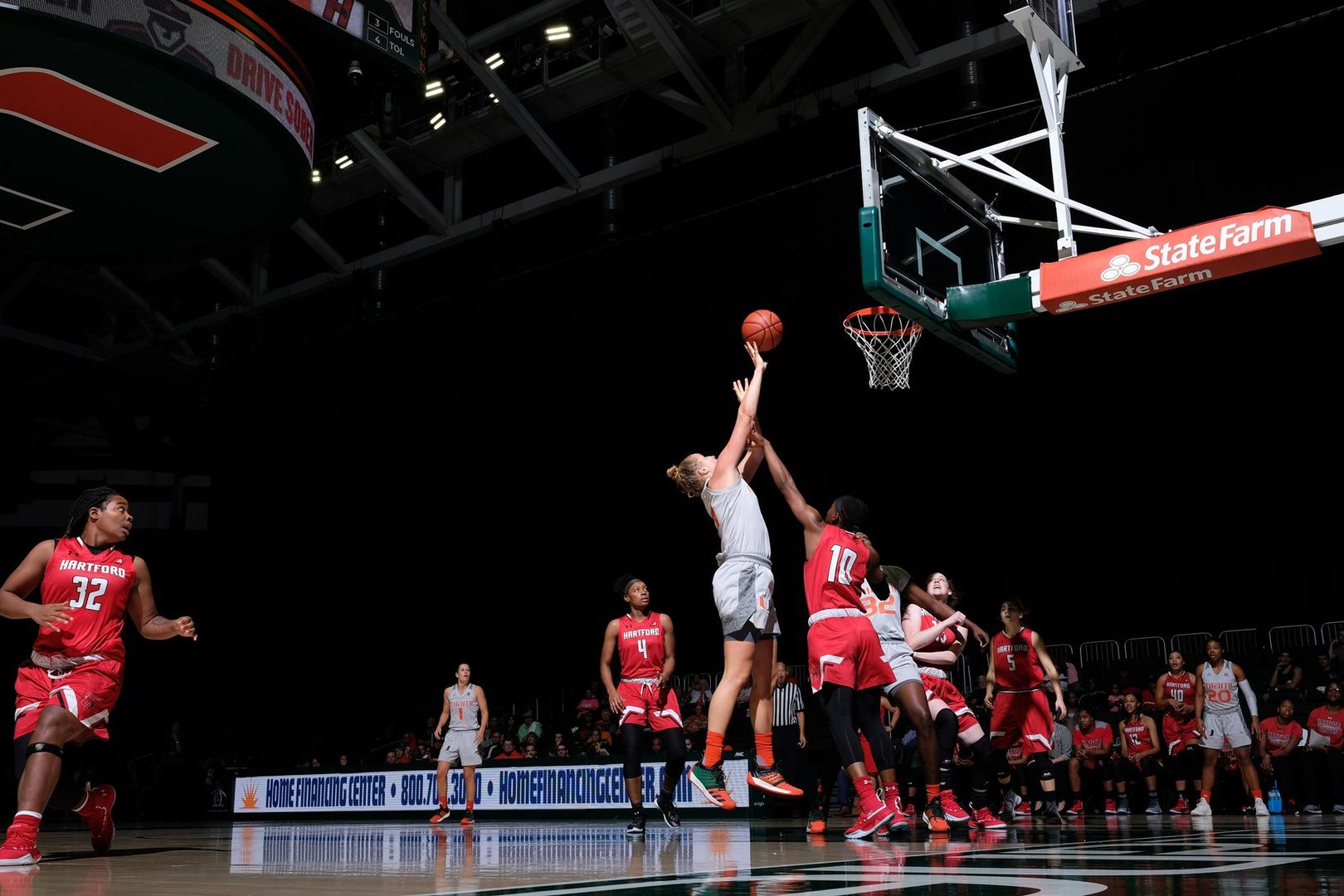 “It felt like an ACC game, it felt like a team that wouldn’t let us do what we wanted to do. They certainly wouldn’t let me control the game,” Miami head coach Katie Meier said. “[They played] multiple defenses and different levels of defense. Our players had to sort of settle in and get comfortable. Teams aren’t going to go away. It is a little different feeling this year, being ranked to start the season. Teams are very fired up, very excited and are bringing their A-games. We have got to match their energy.”

Following a slow start offensively on both ends, Miami held a 13-11 lead through one period of play. Hof scored seven of the Hurricanes’ first eight points, including each of the first five.

Miami made six of its final eight shots of the second quarter, including going on a 6-0 run, to take a 29-26 advantage into the intermission. The Hurricanes held Hartford (1-2) to 11-of-32 shooting (34.4 percent) in the first half.

With the score sitting at 67-60 and under three minutes to play, redshirt junior forward Beatrice Mompremier finished the game with a personal 8-2 run to seal the 13-point win, notching her second double-double of the season in the process.

Mompremier, in a career-high-tying 26 minutes, tallied 19 points a game-high 13 rebounds and three assists, all early season highs for the Baylor transfer.

Hof recorded the 12th outing in school history of a player shooting at least 83 percent on 10-plus attempts and became the second player to do so twice, along with Frances Savage. Sunday marked the sixth time a Hurricane has gone 10-of-12 in a contest, including the third in the past two seasons.

“I thought Bea and Emese rebounded really hard,” Meier said. “So, there size advantage didn’t just show up in their scoring, it was definitely the backside rebounding, too.”

Junior guard Sierra DaCosta led all players with 24 points for the Hawks, finishing 9-of-12 from the floor and 4-of-5 on 3-pointers. Senior guard Lindsey Abed added 18 points and went 4-of-6 beyond the arc.

The Hurricanes will be back on the court Thursday at 7 p.m., when they host No. 19 Marquette in a top-25 matchup for a spot in the Preseason WNIT championship.

MIAMI HURRICANES POSTGAME NOTES
– With Sunday’s victory, Miami took the lead in the all-time series with Hartford and now has a 2-1 mark against the Hawks.
– Between their last eight shots of the second period and their first 10 of the third, the Hurricanes made 14-of-18 attempts over a span of 11 minutes and 21 seconds.
– Along with Hof doing so twice—the other was 12/18/17 against Sacramento State—four other Hurricanes have finished 10-of-12 in a game: Frances Savage (12/2/89 vs. Arizona), Della Wilson (2/14/93 vs. UConn), LaToya Drake (11/14/08 vs. Norfolk State) and Erykah Davenport (2/15/18 vs. Pittsburgh).
– The Hurricanes have a different 20-point scorer in each game this season, with Mortensen tallying 24 at FIU, sophomore guard Mykea Gray posting 25 against Stephen F. Austin and Hof logging 21 versus Hartford.
– Mortensen surpassed 200 points in her career and Banks eclipsed 150 rebounds as a collegian.