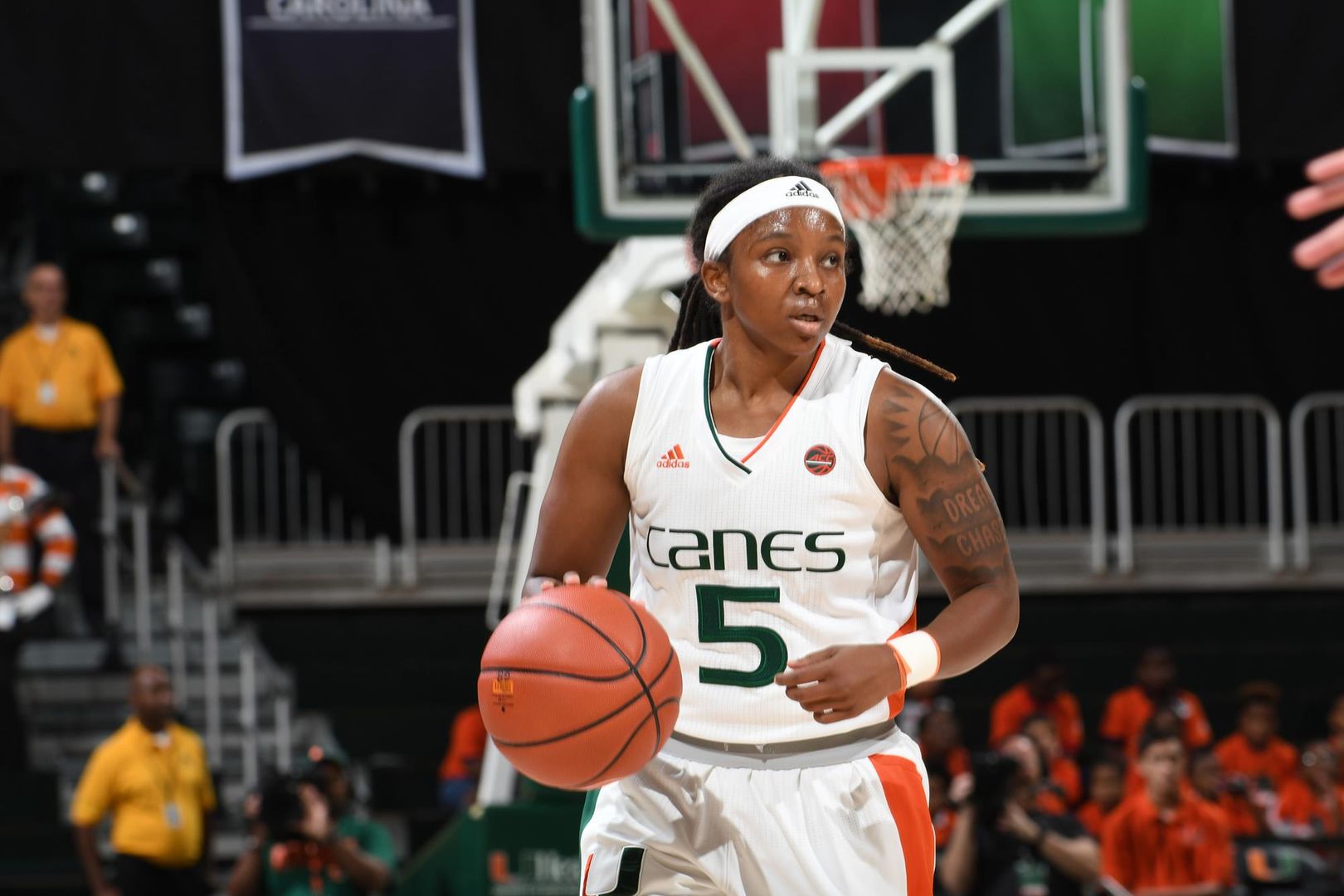 CORAL GABLES, Fla. – In front of a boisterous crowd of 3,079 fans at the Watsco Center, the University of Miami women’s basketball team defeated Stephen F. Austin, 81-60, in its first home game of the regular season.

Mykea Gray turned in a sensational performance in the Preseason WNIT opener for No. 25/24 Miami (2-0). The sophomore guard totaled a game-high 25 points on 9-of-15 shooting, including a 5-of-8 mark from 3-point range, setting career highs in makes in both categories.

“That was a very mature performance from Mykea. Everything she did resulted in points for Miami; the competitor in her was just out there playing,” Miami head coach Katie Meier said. “She wasn’t thinking of herself as a scorer, she was just competing. Because she was competing and so alert, she was able to score a lot.”

The Hurricanes shot 4-of-5 from 3-point range in the opening period, including redshirt junior guard Laura Cornelius making a pair of shots beyond the arc, to lead by as many as 11 points. Stephen F. Austin (0-1) closed on a 5-0 run to make it 22-16 through 10 minutes.

Miami continued its strong 3-point shooting in the second quarter, making four of its first six attempts of the frame to move to 8-of-11. After the Ladyjacks evened the score at 22, Miami outscored them by 13 points, 21-8, the rest of the session and took a 43-30 lead into the locker room.

The Hurricanes ended the half with a 9-of-16 (56.3 percent) mark from 3-point range, while the Ladyjacks went 8-of-15 (53.3 percent) beyond the arc before the break. Gray scored 14 points in the opening half, while Stephen F. Austin senior guard Chanell Hayes totaled 15 points and went 5-of-6 on 3-pointers.

“I could not believe it. They wouldn’t let us establish ourselves inside and so we had to rely on the three a little bit,” Meier said of the first-half 3-point shooting. “Then, defensively, we were still trying to use our size and they were a little bit more perimeter-based; even their center was shooting threes. So, that was the game. The game was in the balance of the threes and I was happy to have the lead we had at halftime because I thought we played extremely well; we just couldn’t put them away.”

Gray scored 11 points in the third period alone, helping Miami extend its lead up to 23 points. The Hurricanes went on to take a 62-40 edge into the last frame.

The Ladyjacks were unable to pull any closer than 17 in the fourth quarter and Miami registered a 21-point victory. It marked the first time Miami scored 80 points in back-to-back games since last season on Jan. 28 at Virginia Tech and Feb. 4 at North Carolina. The Hurricanes last reached 80 in their first two games of a campaign in 2010-11.

Redshirt junior forward Beatrice Mompremier finished with 14 points and a co-game-high seven rebounds. Senior forward/center Emese Hof also pulled down seven boards and set a career high with five blocked shots, the most by a Miami player since Erykah Davenport logged the same amount on Nov. 21, 2015 at Loyola Chicago.

Cornelius concluded the game with nine points and a career-high eight assists, the most by any Hurricane since Endia Banks had eight on Dec. 10, 2017 against Kentucky.

“I feel like I have two coaches out on the court when Laura and Emese are out there together,” Meier said of the Dutch duo. “. . . I will say this as often as anyone will hear it: [Emese] is one of the best defensive players in the world. I’ve seen her play in world championships and I know that is true.”

Miami, which trailed for just 14 seconds, finished with a 30-14 advantage in points in the paint and did not allow any fast-break points for the second straight outing.

The Hurricanes will be back in action Sunday at 1 p.m. at the Watsco Center in the Preseason WNIT quarterfinals against either Hartford or Morgan State.

– This was Miami’s first win against Stephen F. Austin, evening the all-time series at 1-1 after the Hurricanes dropped the opening matchup in 1990.
– Friday’s game marked the first time the Hurricanes have appeared in the Preseason WNIT, which will consist of either two or three additional games.
– After shooting 13-of-20 from 3-point range in the second half Tuesday at FIU and then going 9-of-16 in the first half Friday, the Hurricanes posted a 22-of-36 clip (61.1 percent) over a 40-minute stretch.
– Miami’s nine first-half 3-pointers were its most before the break since shooting 9-of-17 on Nov. 16, 2016 against Charlotte.
– Cornelius reached 450 points at Miami, Gray surpassed 400 points as a collegian and sophomore guard Taylor Mason eclipsed 50 rebounds in her career.