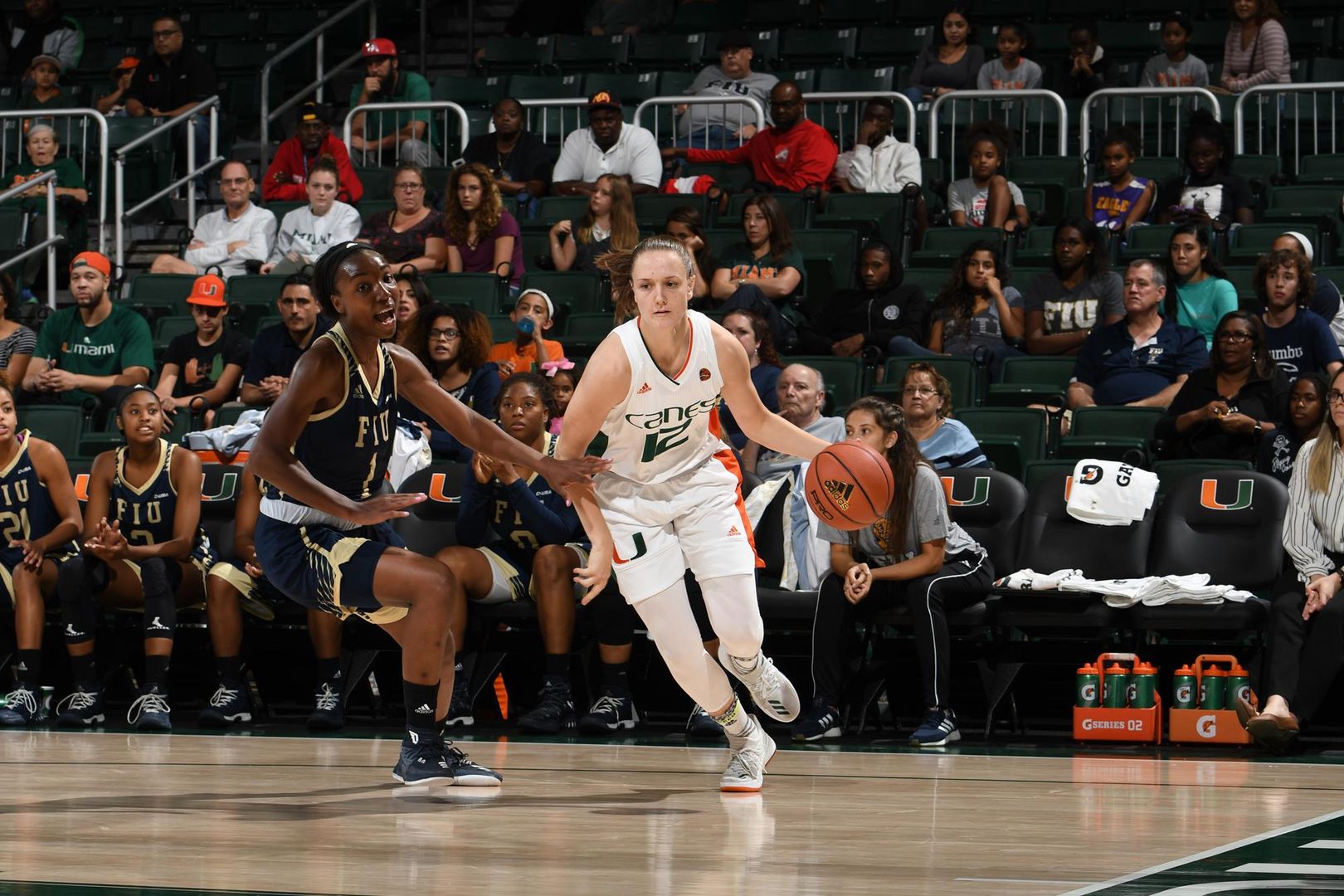 MIAMI – The University of Miami women’s basketball team cruised to a 94-43 road victory against its county foe, FIU, Tuesday night at the Ocean Bank Convocation Center.

Led by a career-high 24 points on 8-of-9 shooting from 3-point range by Sarah Mortensen, No. 25/24 Miami (1-0) led wire-to-wire against the Panthers in its season opener. The junior guard/forward tied the program record for made 3-pointers, while the team finished 16-of-32 from long range.

“We had a couple meetings this week and said that I wanted her not to worry about her shot. I told her to get her mind on facilitating and be a veteran,” Miami head coach Katie Meier said of Mortensen. “We have a lot of young kids playing, a lot of new kids playing and she needed to get everyone in the right spot and run the plays and that’s what she did early in the game. Then, she started to catch fire and the team served her back and gave her the shots she needed to hit and they executed very well.”

In the second period, Miami extended its cushion all the way to 20, which is what it led by entering the locker room, 38-18. Redshirt junior forward Beatrice Mompremier, in her team debut, nearly logged a double-double in the first half alone, entering the break with 12 points and nine rebounds.

Miami’s offensive onslaught and defensive domination continued in the final period, as it built a lead of as many as 55 points. The Hurricanes shot 13-of-20 from beyond the arc in the second half to take the 51-point victory, their largest since topping Illinois State by the same margin on Nov. 28, 2014.

Mortensen, who passed her career high by 11 points, became the second Hurricane to make eight 3-pointers in a game and the first to do so on single-digit attempts. The only other Miami player to reach that mark was former All-American and eventual WNBA All-Star, Riquna Williams, who did so on Jan. 12, 2012 and Nov. 15, 2009, both on 14 attempts.

The Copenhagen, Denmark, native’s 8-of-9 mark (88.9 percent) also placed her seventh on Miami’s single-game percentage list (minimum four 3PA), trailing only the six times a Hurricane has made at least four 3-pointers without a miss.

Freshman forward Jamir Huston placed second on the team with nine rebounds in her team debut, while redshirt freshman guard/forward Rebecca Ripley connected on a 3-pointer in hers.

“I’m so happy for Beatrice, Laura [Cornelius], Ripley and Jamir,” Meier said. “The comeback people and the new people who didn’t play last year were great.”

FIU’s lone player in double figures was redshirt junior Chelsea Guimaraes, who scored 11 points and went 3-of-13 from the floor.

Miami reached 90 points for the first time since registering 92 on Feb. 4, 2018 at North Carolina. The 43 points the Hurricanes conceded were the fewest they have allowed since Boston College logged the same mark on Jan. 21, 2018.

“I like that we started off and dominated inside. Then, I liked that FIU thought that maybe we need to double and then when they doubled, we found the right person,” Meier said. “We found where they were doubling from. We rebounded our tails off tonight and that was really important because I haven’t seen the toughness on the glass that I saw tonight. I haven’t seen that in practice.”

The Hurricanes finished with a 50-34 edge in rebounding, a 23-9 advantage in assists and did not allow any fast-break points. Miami outscored FIU by 24 points, 40-16, off the bench, as well as by 21 points, 37-6, in the paint. The Hurricanes, who tallied 18 second-chance points and allowed zero, eclipsed a dozen made 3-pointers for the first time since connecting on 13 against Florida A&M on Dec. 28, 2014.

Miami is set to play its first home game of the regular season Friday at 11 a.m. when it faces Stephen F. Austin in the Preseason WNIT at the Watsco Center.

– Miami’s 59th matchup against FIU moved the Panthers past Florida State for sole possession as the Hurricanes’ most common foe, while the 37 victories for the Hurricanes are their most against any team.
– The Hurricanes improved to 38-9 all-time in season openers, including 21-1 in the past 22 years, while Meier moved to 16-2 to begin a season, including 13-1 at Miami.
– Mompremier and Marshall earned their first starts as Hurricanes, while redshirt junior guard Laura Cornelius started for the first time since Jan. 29, 2017, after missing last season due to injury.
– The 51-point win was Miami’s third-largest ever in a season opener, trailing only a 63-point victory, 101-38, against Broward Central and a 57-point triumph, 94-37, over Florida Atlantic on Dec. 6, 1992.
– Mompremier moved past both 550 points and 450 rebounds as a collegian, Gray eclipsed 50 made 3-pointers at Miami, Marshall surpassed 250 points in her career, sophomore guard Endia Banks eclipsed both 250 points and 100 made field goals as a collegian, senior forward/center Emese Hof surpassed 750 points and reached 200 free-throw attempts in her career, while sophomore guard Taylor Mason eclipsed 50 points as a Hurricane.