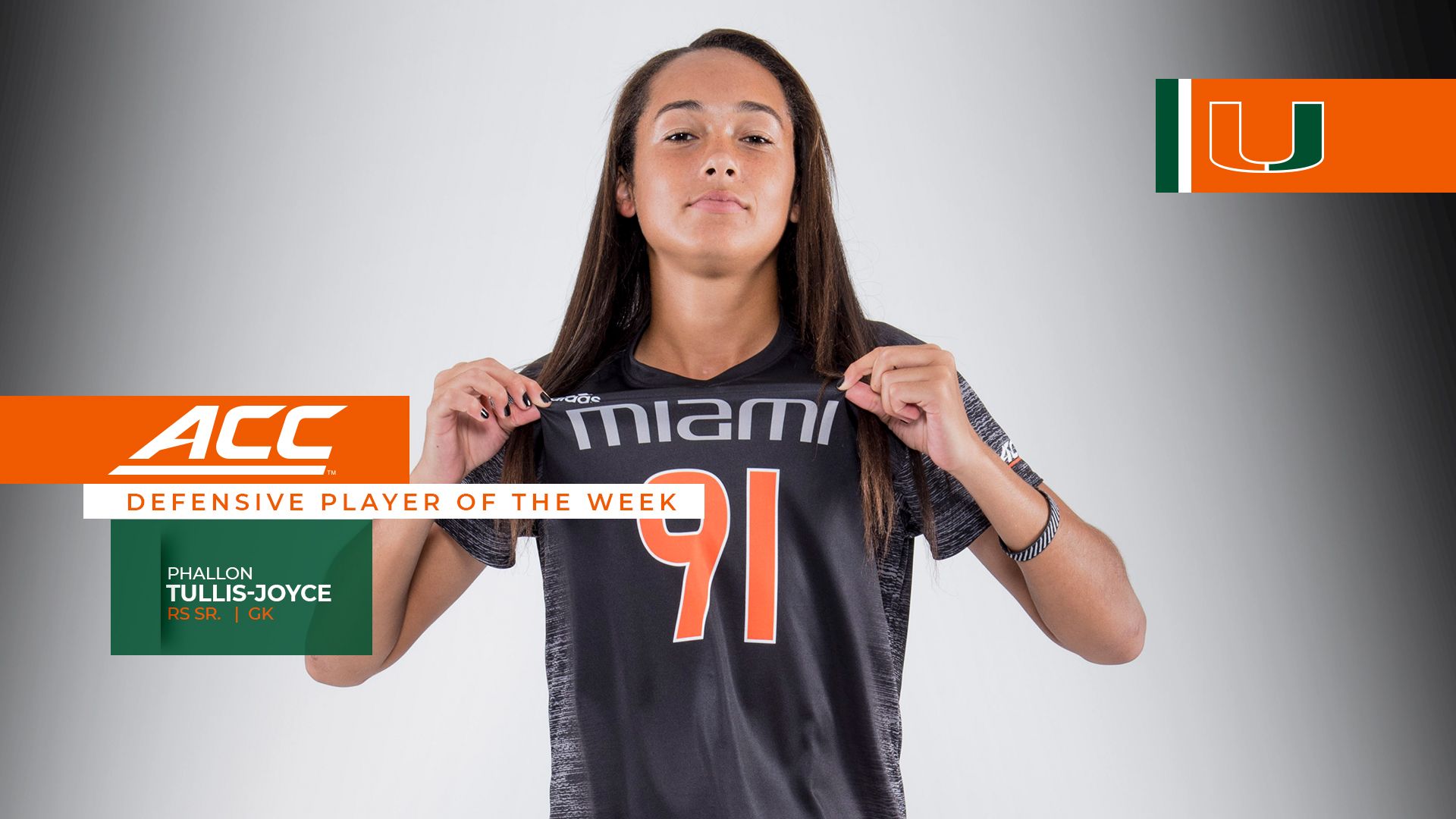 CORAL GABLES, Fla. – Following a senior night to remember, Phallon Tullis-Joyce concluded her illustrious collegiate career at the University of Miami by earning ACC Defensive Player of the Week recognition, as announced Tuesday morning by the conference.

“Phallon has been great all season long, but the last three weeks of the season were definitely some of her best performances,” Miami head coach Sarah Barnes said. “So, it was great for her to go out on this note, especially against a top opponent in FSU only a week removed from a great performance against [third-ranked] UNC. We are so proud of her and certainly could not have had success against [FSU] without her performance.”

Ending the season against ninth-ranked Florida State at Cobb Stadium, Tullis-Joyce collected seven saves, leading the Hurricanes to a 1-0 victory.

Facing 25 shots, 11 corners and seven shots on target, the Shoreham, N.Y., native served as a brick wall for the Hurricanes with several big plays to prevent goal-scoring opportunities off of corners and crosses.

Arguably the biggest save of the evening for the redshirt senior came with the match scoreless and only ten seconds remaining in regulation. Off of a cross, FSU’s Dallas Dorosy found herself in front of the net sending a header towards the bottom right corner. However, the quick reactions of Tullis-Joyce allowed her to get a hand on the ball and send the match into overtime.

In the 95th minute, Tullis-Joyce registered her career-high-breaking 85th save of the season when she jumped on a ball sent on net by Malia Berkely.

With the seven saves in the match, the Shoreham, N.Y., native closed out her illustrious career with 259 saves, ranking third all-time at UM. The shutout also marked the 14th for Tullis-Joyce, who finished in a tie for second place with Lauren McAdam.

Overall, Tullis-Joyce closed out her collegiate career with 62 starts, while ranking third in program history with 24 wins and second with 5,584 minutes logged in net.

The redshirt senior earned ACC accolades for the second time in her career, while also earning TopDrawerSoccer Women’s Team of the Week honorable mention for the first time.