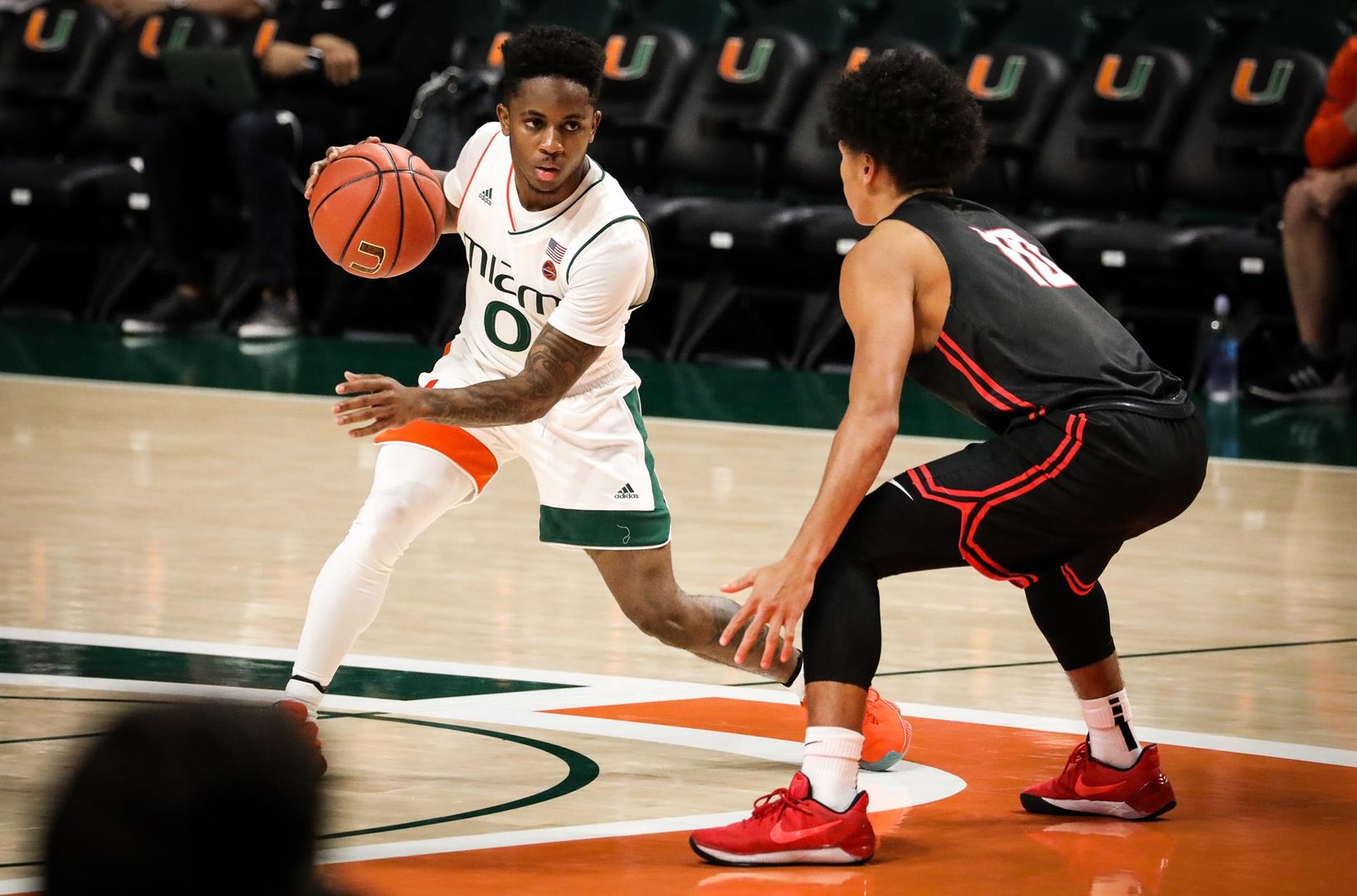 Junior forward Dewan Hernandez led all scorers with 19 points and added a game-high 10 rebounds to record a double-double.

Junior guard Dejan Vasiljevic also chipped in, as he totaled 17 points and five rebounds, converting on all seven of his attempts from the charity stripe. Redshirt senior Zach Johnson also finished with 17 points on Tuesday night.

Stuffing the stat sheet, senior guard Anthony Lawrence II picked up a game-high eight assists and three blocks, to go along with 11 points, eight rebounds and a steal.

As a team, the Hurricanes shot an efficient 56.1-percent (32-of-57) from the field, converting on 10 long range shots, while the defense blocked seven shots and held the Buccaneers to 26-of-72 (36.1-percent) from the field.

With Barry taking an early 5-3 lead in the first 1:28 of action, Miami made quick adjustments on the defensive end, outscoring the Buccaneers 7-0 over the next 3:12 of play. Over the stretch, the Hurricanes forced the Buccaneers to shoot 0-for-6 from the field, with both Lawrence and Hernandez recording blocks.

With 12:20 remaining in the opening stanza, the Buccaneers again fought back to even the match at 14-14 off a put-back jumper from Kenan Guzonjic. Moments later, Vasiljevic knocked down a pair of shots at the free throw line to give the Canes a lead they would not look back on.

Overall, the Hurricanes closed out the half on 27-19 run to head into the locker room leading, 41-33, as Vasiljevic led all-scorers with 13 points in the period shooting a perfect 5-of-5 from the charity stripe.

Out of the locker room, the Hurricanes came out firing on all cylinders going on to outscore the Buccaneers 50-28 in the second stanza. Johnson and Hernandez led the attack in the half, as both notched 15 points in the final 20 minutes of play.

Hernandez finished the period shooting a perfect 7-of-7 from the field, including a 3-pointer, as the team shot an efficient 17-of-27 (63.0-percent) from the field.

Miami opens the regular season at home on Nov. 9 against Lehigh with tipoff set for 7 p.m., and will be broadcast live on ACC Network Extra.