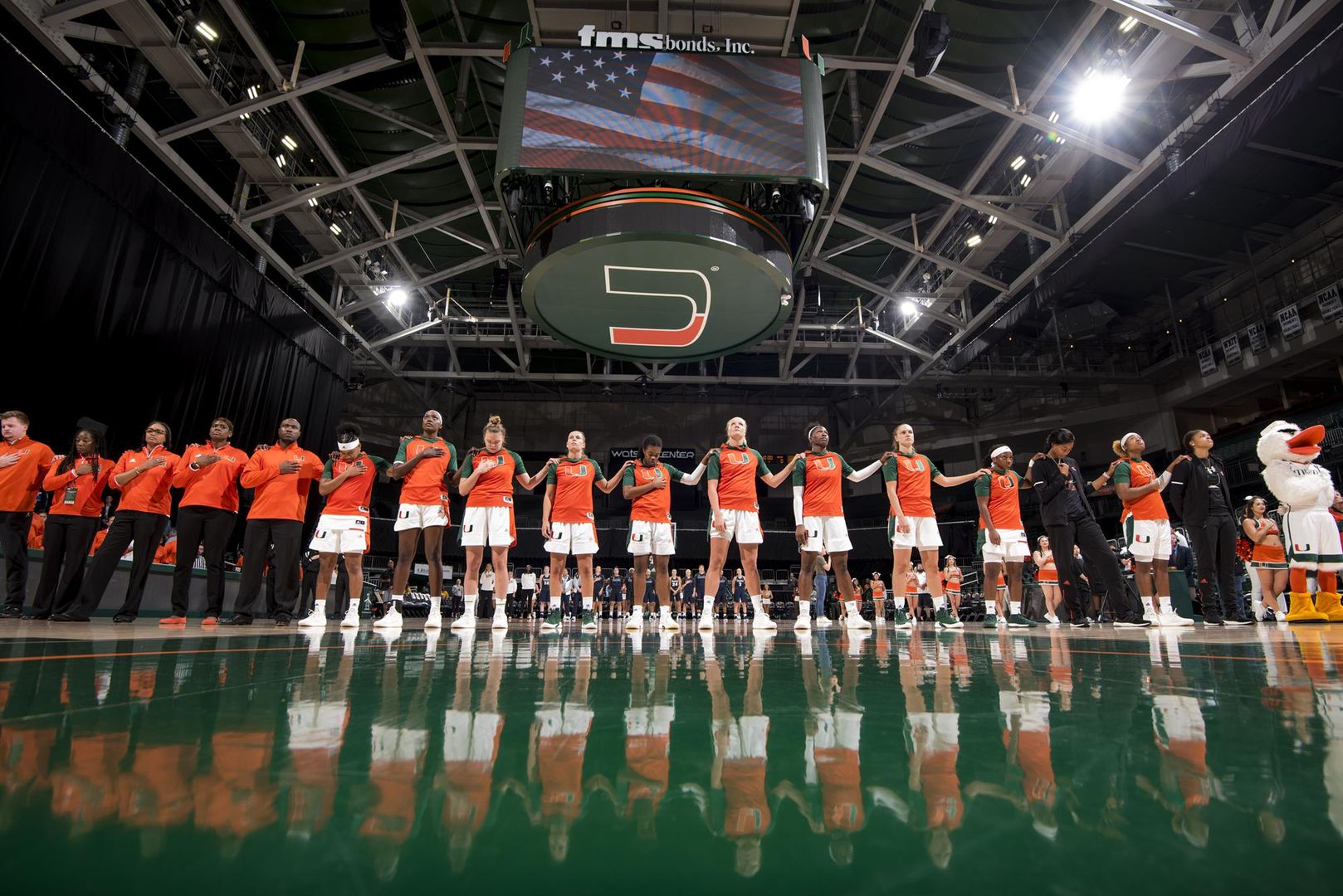 Senior forward/center Emese Hof turned in a dominant outing with a game-high 30 points on 14-of-15 shooting, while redshirt junior forward Beatrice Mompremier tallied a double-double in her first appearance as a Hurricane.

“Well, it was nice to be tested. We have so much respect for Nova Southeastern and [head coach] LeAnn [Freeland] does such a great job,” Miami head coach Katie Meier said.  “They are one of the most alert teams in the country. I don’t care what division they play in; I don’t care what level they play in. They’re so alert mentally and so well-conditioned, and we needed it. We were chasing them all over the court.”

The Hurricanes raced out to a 10-0 lead on the Sharks, holding them scoreless for the first 3:17. Miami made its first eight field-goal attempts, not missing a shot in the opening 7:24 of play, en route to a 20-15 lead after one quarter.

Miami continued its strong play on the offensive end to double its edge and take a 41-31 advantage into the locker room.

Hof scored 22 points in the opening 20 minutes, making each of her first 11 shots before logging a miss with one second left before the break.

“She missed one shot, the one at the end of the half. That was her easiest shot, too,” Meier said. “She was cleanly open on that one, too. Emese is just really smart and really efficient. She was very, very balanced and very composed tonight.”

In a third quarter that fittingly opened with a basket by Hof, the Hurricanes upped their lead to as high as 24 and held a 22-point cushion, 71-49, entering the last frame.

Miami pushed its lead to as many as 26 points multiple times in the fourth quarter, easily sealing a 91-67 victory in which the Sharks never so much as tied the score.

Mompremier, a transfer from Baylor, finished with 19 points on 7-of-11 shooting to go along with 10 rebounds. Redshirt junior guard Laura Cornelius, in her return to the court after missing the 2017-18 season due to injury, recorded 13 points and sophomore guard Mykea Gray added 10.

While unofficial since the game was an exhibition matchup, Hof became the first Hurricane to log 30 points in an outing since Adrienne Motley did so on March 20, 2015 against Washington in the opening round of the NCAA Tournament in Iowa City, Iowa. If official, her 14-of-15 mark would have also set the single-game program record for field goal percentage (min. 10 FGA).

Miami finished with an 18-2 edge in fast-break points and tallied 13 steals to Nova Southeastern’s one. The Hurricanes also dominated down low, outscoring the Sharks by a 62-26 margin in the paint.

“Our style this year is going to be points in the paint and we established that early,” Meier said. “That kind of broke their back a little bit.”

The Hurricanes will open the regular season Nov. 6 at 7 p.m., when they head across the county to play in Miami at FIU.