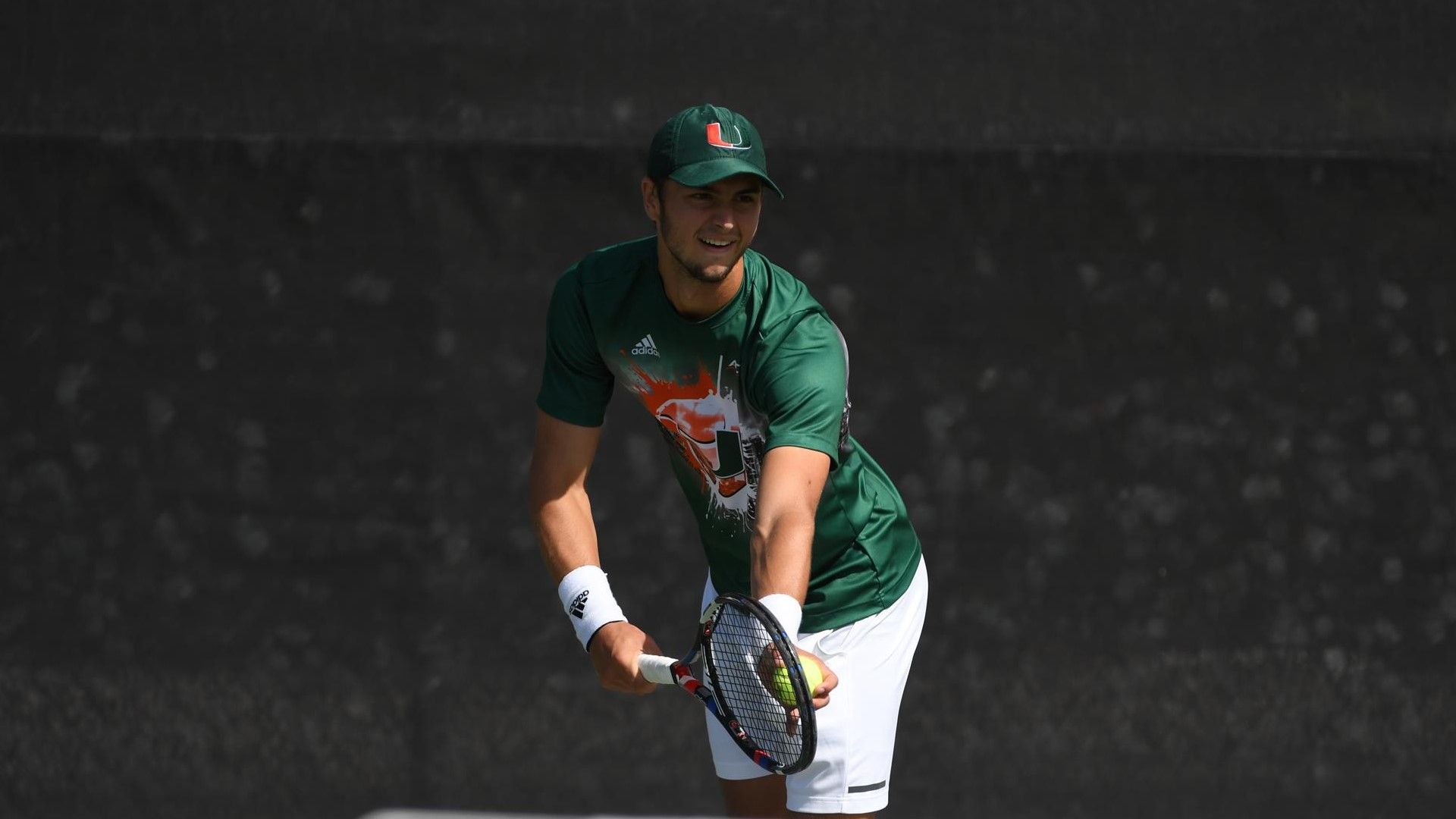 Hurricanes Wrap-up Day One in Tuscaloosa

TUSCALOOSA, Ala. – The University of Miami men’s tennis team opened its 2018-19 campaign Friday at the Crimson Tide Four-In-The-Fall Championships held at the University of Alabama Tennis Center and Roberta Alison Baumgardner Tennis Facility in Tuscaloosa, Ala.

Redshirt junior Dane Dunlap and freshman Franco Aubone highlighted the morning with a victory in the opening round of the Crimson Doubles Draw. The duo knocked off Memphis’ Matt Story and Marshall Sullivan, 8-3. Saturday at 10 a.m. ET, the pair will battle Akos Kotorman and Tim Ruetzel of Tulane in the semifinals.

Pairing up in the Houndstooth Doubles Draw, sophomore’s William Grattan-Smith and Tatsuki Shimamoto fell to Sam Fischer and Zhe Zhou of Alabama, 8-4.

In singles action, the Hurricanes got off to a slow start with all four players dropping their first-round matches.

After claiming the opening set over Tulane’s Ruetzel 7-5, Dunlap was unable to seal the victory, ultimately dropping the match, 7-5, 5-7, 1-6.

In the consolation round, the redshirt junior topped Marshall Sullivan of Memphis, 6-2, 6-3, and setting up a third round matchup against Tennessee’s Luca Wiedenmann Saturday at 1:30 p.m.

Following a 1-6, 3-6 setback against Memphis’ Oscar Cutting, Grattan-Smith bounced back in his second game, registering a 6-3, 6-3 win over Alabama’s Fischer.

Aubone forced 12 games in the opening set against Princeton’s Damian Rodriguez, however was unable to get over the hump, falling 5-7, 3-6. In only his second collegiate match, Aubone fell to Alabama’s Patrick Kaukpvalta, 3-6, 3-6.

In the Houndstooth Singles Draw opener, Shimamoto dropped his match against Riccardo Roberto of Alabama, 1-6, 3-6. In his second round matchup, he took the opening set over Memphis’ David Stevenson, 6-4. However, he was unable to take a second set, ultimately dropping the match, 6-4, 3-6, 4-6.

The three-day event will continue on Saturday with two rounds of doubles matches set to begin at 10 a.m. The third round of singles will follow doubles action, approximately at 1:30 p.m. The final day of competition will be on Sunday with the last round of singles set to start at 10 a.m.

Matches on the scoreboard side of the Alabama Tennis Stadium will be live streamed HERE.