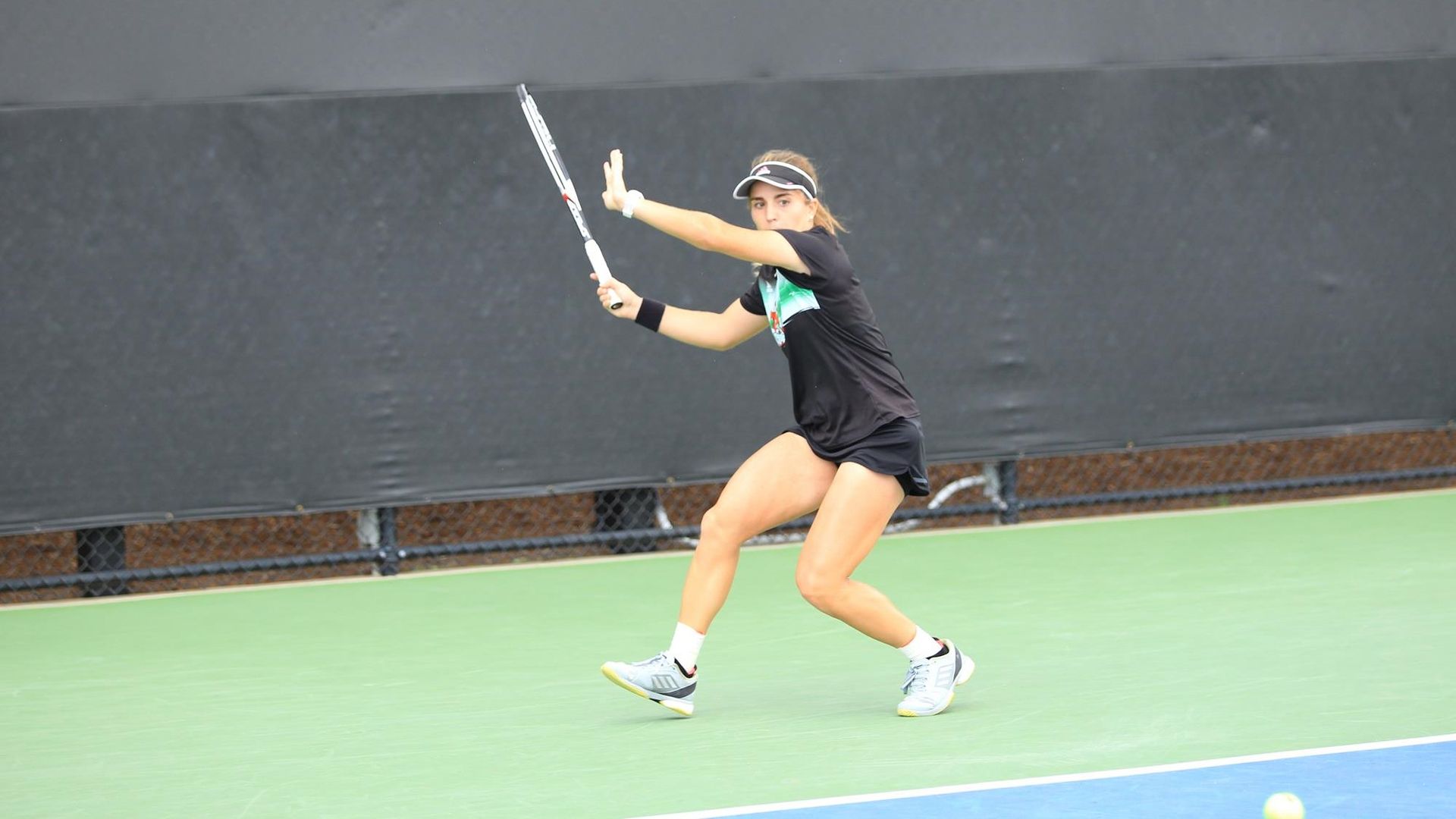 After rallying to force a split, third-ranked and third-seeded Perez-Somarriba was unable to come all the way back at the Wake Forest Tennis Complex, dropping a 1-6, 7-5, 0-6 decision to Lazaro, ranked No. 13 and seeded No. 9-16.

“I think she met a tough opponent today and she struggled to adjust to her ball early in the match,” Miami head coach Paige Yaroshuk-Tews said. “She struggled to adjust to her tennis that she was playing, but congratulations to Lazaro. She played a solid match, went after her balls, played a little bit more aggressively than Stela did. Not a fun way to end the season. Stela definitely didn’t play her best tennis today, but we have to give credit where credit is due. FIU played a great match.”

After the players split the first two games, Lazaro won five in a row to take the opening set, 6-1. It was just the second time this season Perez-Somarriba did not win multiple games in a set, with the other coming in her first loss of 2018.

Lazaro, who peaked at third in the ITA rankings this year and won the 2017 Oracle ITA National Fall Championships title, grabbed the first game of the second set before Perez-Somarriba evened it at one to snap her six-game skid.

Stopped only by a six-minute rain delay, Lazaro then won three straight games to take a 4-1 lead. Perez-Somarriba responded with a hold, but the senior countered with one of her own to make it 5-2 in the second.

After winning back-to-back games for the first time all day, Perez-Somarriba took a 40-30 lead in the 4-5 game, but Lazaro pulled even at deuce. Facing a match point, Perez-Somarriba stayed alive with an unforced error by Lazaro.

The ACC Player of the Year and ITA National Player to Watch then won the next two games, making it five in a row, to take the second set, 7-5.

“She didn’t want to lose. I think that the nerves went out the door and she was able to open up and just play her game,” Yaroshuk-Tews said. “When she was able to do that, it was a different ballgame. I think she applied a little bit of pressure on Lazaro. We were seeing different balls and different depths that we weren’t seeing in the first set and a half. She started to hit a little bit shorter. She started making a couple unforced errors at big moments and Stela was able to capitalize and close out the set. We’ve seen Stela do that before, get down big and just kind of free up and hang in there.”

However, the magic ended there, with Lazaro taking all six games of the final set, as Perez-Somarriba dropped a set by a 0-6 margin for just the third time in her illustrious career.

The loss ended a three-year streak of Hurricanes reaching the NCAA semifinals, as Perez-Somarriba did so in 2017 after Sinead Lohan in 2016 and Stephanie Wagner in 2015.

Perez-Somarriba’s NCAA-ending defeat this season closely mirrored her Final Four loss a season again when she rallied from a 1-6, 1-5 deficit against sixth-ranked Belinda Woolcock of Florida to force a third set before falling, 1-6, 7-5, 6-3.

The Madrid native ends one of the finest campaigns in program history with a 39-8 record, good for the sixth-most wins ever by a Hurricane. She went 20-5 against ranked foes and finished with a 28-3 mark in spring play, including 23-2 at No. 1, with her three defeats coming in the only three matches she dropped the first set.

“You can’t sum up Stela’s season in a quote. It just wouldn’t be fair to her,” Yaroshuk-Tews said. “She had a phenomenal season and she’s a phenomenal kid. She’s got two more years in front of her. She’s going to improve. She’s going to learn from moments like this and I know that the future is very, very bright for her.”

Perez-Somarriba became just the ninth Hurricane to make the NCAA Singles Championship Sweet 16 multiple times, including the seventh to do so in back-to-back years. Her 6-2 record in the tournament thus far is good for the second-best winning percentage (.750) of any Miami player to participate in it multiple times, trailing only 2007 NCAA champion Audra Cohen.

This was the 24th NCAA Singles Championship Sweet 16 berth in Miami history and the 14th in the past 15 seasons, including the 10th time in that span at least one Hurricane has reached the third round. Miami has now had at least one representative in the Sweet 16 each of the past four years, tying the program record set from 1985-88 and 2007-10.