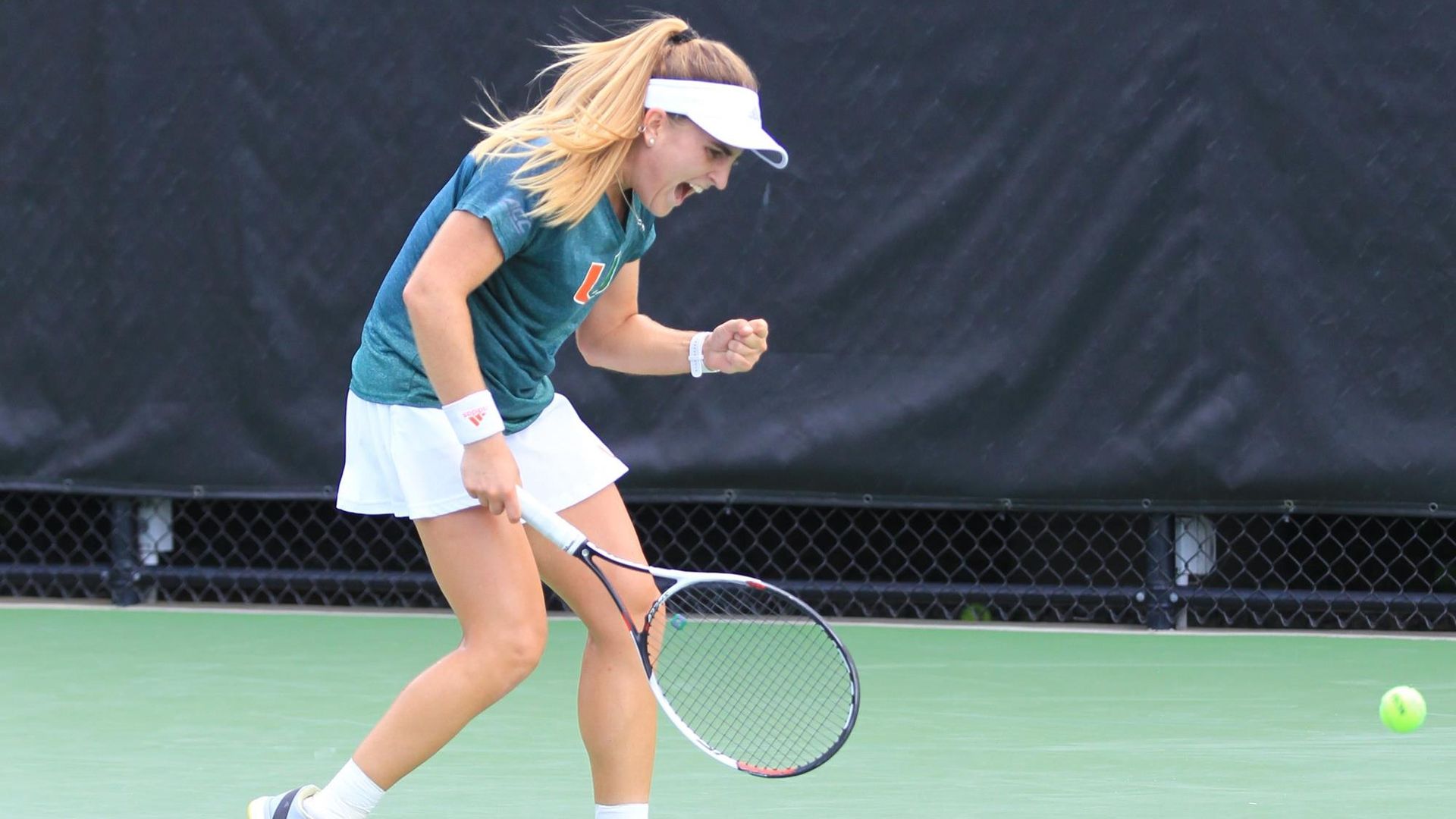 WINSTON-SALEM, N.C. – For the third time in as many years, a member of the University of Miami women’s tennis team opened the NCAA Singles Championship against a player whom she defeated en route to the Final Four the prior season.

In both 2016 and 2017, the result swapped, with the Hurricanes’ representative losing the second affair. In 2018, however, sophomore Estela Perez-Somarriba flipped the script, downing No. 29 Kate Fahey of Michigan for the second year in a row.

“Obviously, she did what she needed to do,” Miami head coach Paige Yaroshuk-Tews said. “The tennis wasn’t at the highest level today, but I think she played well in the big moments and in this tournament, that’s what you need to do. You need to just relax with the level of the tennis. You can’t always look for perfection, but you’ve got to be willing to just outcompete the kid on the side of the net.”

The match opened with three consecutive breaks, before Perez-Somarriba logged a hold to take a 3-1 lead. Fahey countered with back-to-back games to level the first-set score at three. From there, Perez-Somarriba took over to close out the set. She won three games in a row, including coming back from 0-30 in the 4-3 game, to take the opening set, 6-3.

Fahey stormed out to a 3-0 lead in the second set, notching a pair of breaks before Perez-Somarriba won back-to-back games to pull within one. Fahey countered by winning consecutive games at love to go in front, 5-2. After Perez-Somarriba won a game to stay alive in set two, Fahey rallied back from a 0-40 deficit in the set finale to break and win the second, 6-3.

The third set, though, was all Perez-Somarriba. The Madrid native won the first seven points of the set and took each of the first five games to pull within a game of victory. She broke at love in the first and fifth games, as well as rallied from 30-0 and 40-15 deficits in the third.

After Fahey broke to get on the board, Perez-Somarriba registered her fourth break of the set, winning at deuce on her third match point to close out a 6-3, 3-6, 6-1 triumph.

“Fahey kind of gave her a sloppy first game and I think that allowed Stela to just relax a little bit, open up and start ripping the ball,” Yaroshuk-Tews said of the third set. “I think Stela’s quality of ball definitely was much better than it was in the first two sets. Maybe the sloppiness had to do with Stela’s ball, maybe it didn’t, but Stela just raised her level. Her quality of ball was deeper in the court, bigger and more aggressive.”

The ACC Player of the Year and ITA National Player to Watch, Perez-Somarriba will return to the court Thursday to take on No. 39 Megan McCray of Oklahoma State in the Round of 32 at 10 a.m.

This is the 15th time in the past 16 seasons, including the seventh in a row, at least one Hurricane has reached the second round of the NCAA Singles Championship.

Perez-Somarriba is the first player in program history to beat the same opponent multiple times in the elite tournament. Audra Cohen lost to USC’s Lindsey Nelson in 2006 and then defeated her in 2007, while Stephanie Wagner downed Texas A&M’s Saska Gavrilovska in 2015 and fell to her 2016 and Sinead Lohan topped Michigan’s Brienne Minor in 2016 and dropped a decision in 2017.

With the win, Perez-Somarriba becomes the 10th Hurricane to log at least five-career wins in the NCAA Singles Championship. She is now 38-7 in her sophomore campaign, including 19-5 versus ranked foes, 10-2 against top-30 players and 27-2 in spring matches.

Live stats and live video for Perez-Somarriba’s match against McCray can be found HERE on the tournament homepage, which also has the full bracket and additional information.