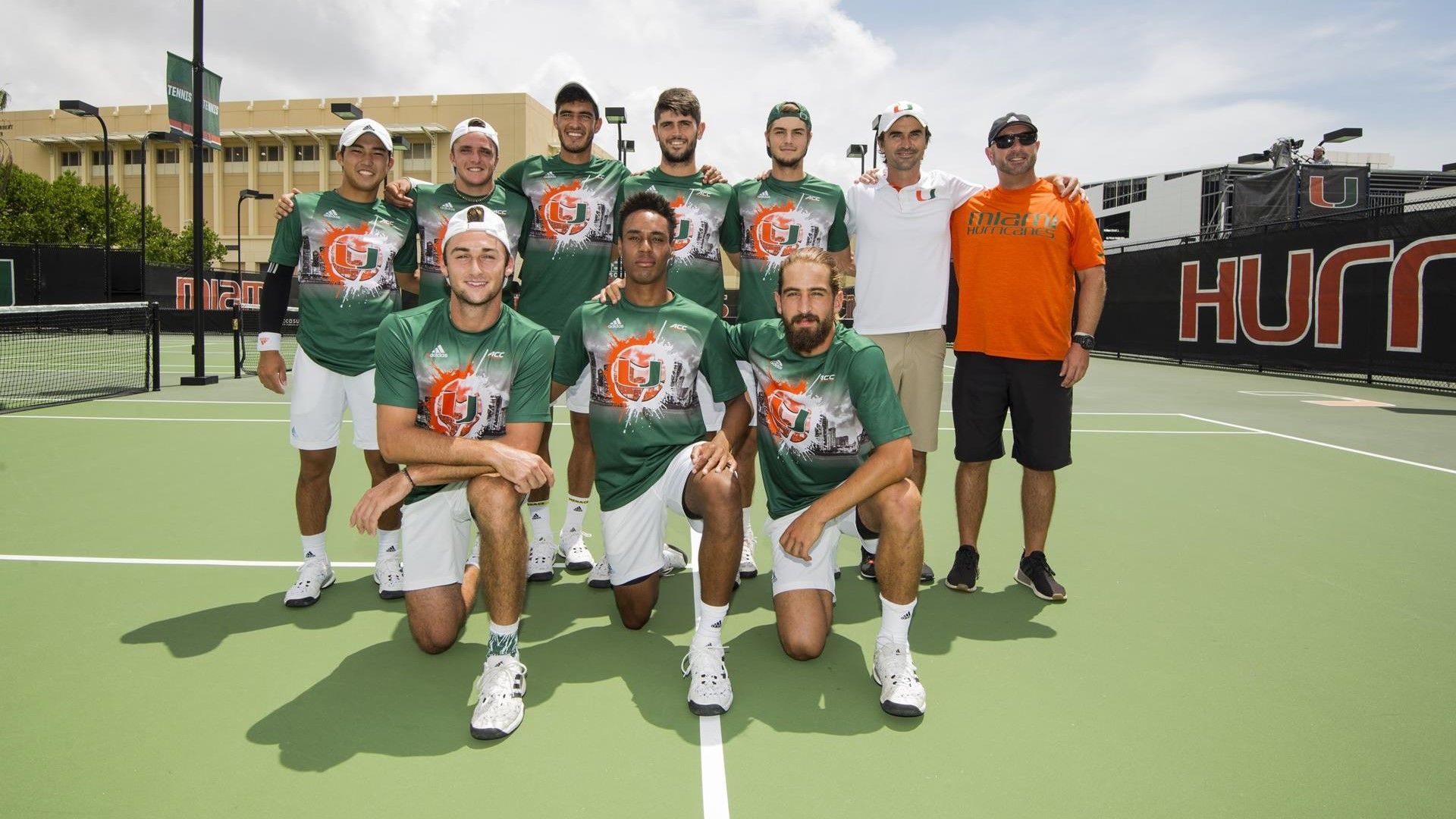 The Hurricanes (14-11, 4-8 ACC) picked up momentum with an impressive comeback in doubles play and dropped only one singles set to the Flyers (16-6, 4-1 A-10) for its seventh shutout victory in 2018. The Canes will enter postseason with the program’s most wins in a season since 2014 and with the best home record since 2006, when Miami again went 12-2 in Coral Gables.

“I’m happy for our guys to get a good win, tough win on a long day,” Miami head coach Aljosa Piric said. “We definitely had to work this afternoon against Dayton. They are a quality team, well-coached, and pushed us in doubles and we were really fortunate there to win the doubles point. Our guys responded well in singles and played hard and we got a good W. I’m happy for our seniors to get a win at home in their last match; I was excited for them and excited for our team,” Piric said. “We are going to take a couple of days off and will be ready to go to the conference tournament.”

Worthy of the day, it was a pair of seniors who clinched Miami’s first point of the match. Christian Langmo and Niclas Genovese, who debuted together in doubles, fought off a triple match point from Lorenzo Rollhauser and Steven Karl to force a tiebreaker at No. 2. In it, the Canes duo picked consecutive mini-breaks to close out the contest at 7-6 (7-4).

The victory added to the one by senior Nile Clark and freshman Pablo Aycart, who took down Will Harper and Simon Jayaram, 7-5, in the No. 3 spot to even up the doubles contest.

The Flyers had struck first on the day with Zach Berry and Carsten Fisher prevailing over freshman Bojan Jankulovski and redshirt sophomore Dane Dunlap, 6-4, on the main court.

Dunlap and Jankulovski made up for the loss in singles play, dropping just two games each at the No. 3 and No. 2 spots, respectively, to increase Miami’s lead to 3-0. The sophomore took care of business against Theo Jener, 6-2, 6-0, while the rookie downed Berry, 6-0, 6-2, for his 19th victory this spring.

Langmo had the pleasure to clinch the match in his Coral Gables farewell, defeating Fisher, 6-4, 6-2, to enter the postseason with a 14-8 record, 11 of his wins coming in the No. 1 spot.

Freshman Tatsuki Shimamoto also jumped off to a one-set lead on the day and was two games away from a victory over Rollhauser, 6-4, 4-2, when play was halted.

After a confident start to his final singles match at home, Genovese managed to hold Karl at bay, 6-2, 2-5, in his debut in the No. 4 spot.

Harper was the only Flyer to win a singles set in the inaugural meeting between the two programs, but Aycart battled back in the No. 6 matchup and had a slight edge in set two, 1-6, 4-3, as celebration ensued for the Hurricanes.

“It’s a tough team. We’ve seen them this year at home and our match came down to the wire,” Piric said. “Tournament time is a different type of competition, it’s a survive-and-advance mentality. Our guys are going to be ready to battle and we look forward to it.”