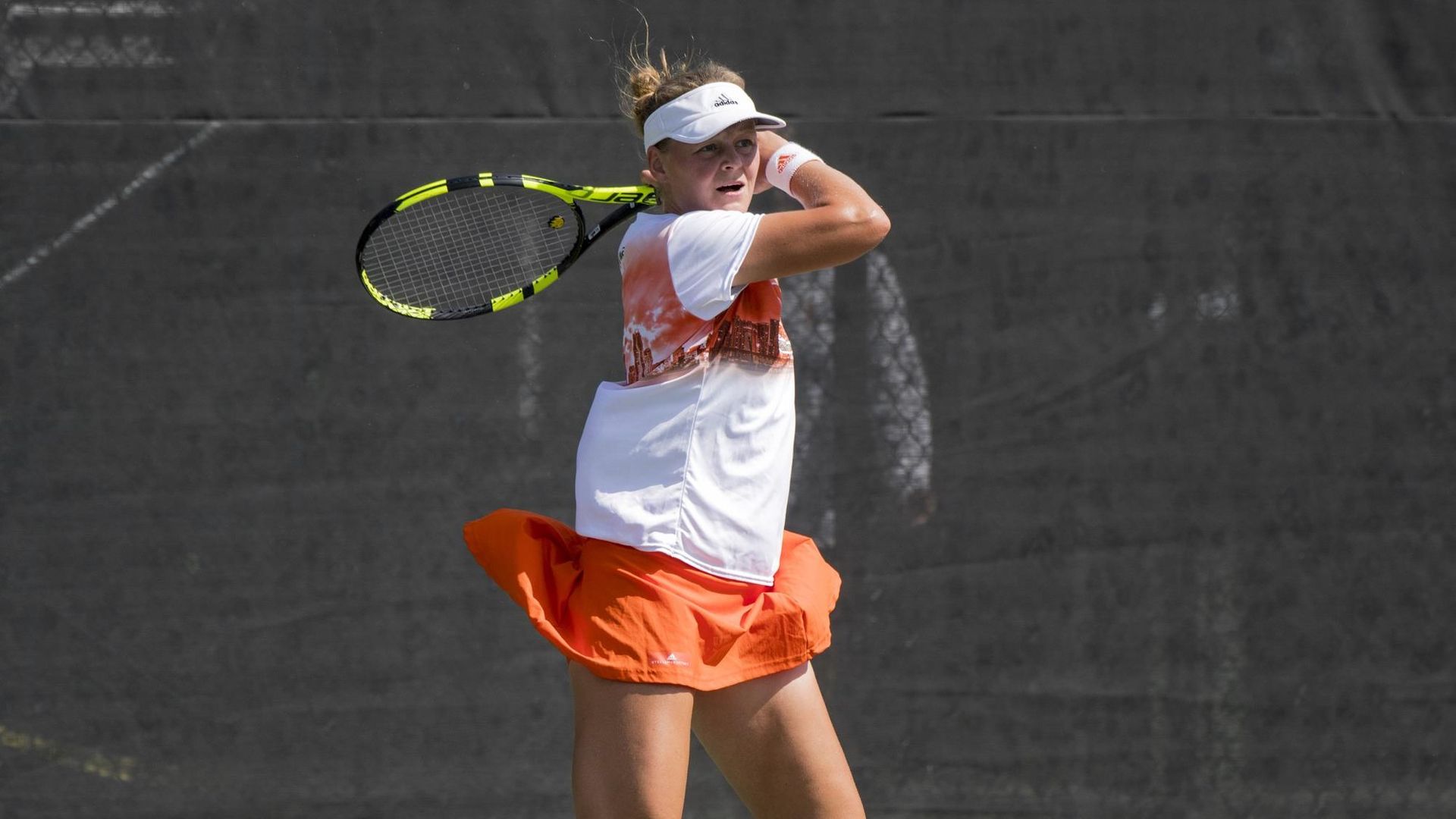 LOUISVILLE, Ky. – The University of Miami women’s tennis team notched its 10th ACC win of the season with a 5-2 road triumph Friday evening at Louisville.

No. 17 Miami (14-6, 10-3 ACC) dropped the doubles point, but earned the victory with an impressive showing in singles play at the Bass-Rudd Tennis Center.

“We definitely didn’t play our best tennis today,” Miami head coach Paige Yaroshuk-Tews said. “We have always taken pride in doing some basic things really well and today we didn’t do those things. [They are] things completely within our control. Being great means being consistent, whether it’s indoors, on the road in the heat or in the cold. Let’s see how we bounce back. We won, but it wasn’t pretty.”

The Hurricanes grabbed the early edge in doubles, as the No. 85-ranked duo of sophomore Dominika Paterova and freshman Ulyana Shirokova tallied a 6-1 triumph over Ariana Rodriguez and Sena Suswam.

Louisville (13-11, 3-10 ACC) evened the doubles tally behind a 6-3 win from Raven Neely and Maya Smith against the No. 81-ranked pair of senior Sinead Lohan and junior Ana Madcur.

About 70 minutes after beginning, the decisive match ended with a narrow tiebreaker, with sophomore Estela Perez-Somarriba and junior Daniella Roldan, ranked No. 78, dropping a 6-7 (5-7) decision to the No. 45-ranked duo of Mariana Humberg and Abbie Pahz.

In singles completion, third-ranked Perez-Somarriba quickly leveled the score with an outstanding showing versus Aleksandra Mally, cruising to a 6-0, 6-0 win and upping her spring singles record to 21-1. It was her first 6-0, 6-0 win since the opening match of her collegiate career on Sept. 24, 2016 against Pittsburgh’s Callie Frey.

Paterova then gave Miami a lead it would not relinquish with a 6-2, 6-2 defeat of Suswam, marking her fifth consecutive victory.

No. 57 Lohan continued the Hurricanes’ momentum with a 6-4, 6-2 win against Humberg to make it a 3-1 advantage for the visitors.

Shortly thereafter, Madcur topped Tiffany Huber, 6-3, 6-3, to lock up the victory for Miami, which reached double-digit ACC triumphs for the sixth time in 10 years and the fourth in the past five.

Roldan tacked on the Hurricanes’ fifth and final point of the day by registering her third win in a 10-point tiebreaker in her past four outings, each of which has come after falling in the opening set. The Boca Raton, Fla., native defeated Pahz, 3-6, 7-5, 1-0 (11-9) to notch her fourth straight victory.

This is the third time in 2018 Miami has lost the doubles point and won the match, joining 4-3 road decisions at then-No. 31 Clemson on March 4 and then-No. 25 Wake Forest on March 31.

With the Hurricanes’ victory and Virginia’s loss to Clemson, Miami clinched a top-four seed and double-bye in the ACC Championship and can finish as high as third. Miami has finished in the top four all 14 years it has been in the conference.

The Hurricanes, who moved to 4-0 all-time against Louisville with the win, will conclude their regular season slate Sunday in Notre Dame, Ind., when they take on Notre Dame at noon.