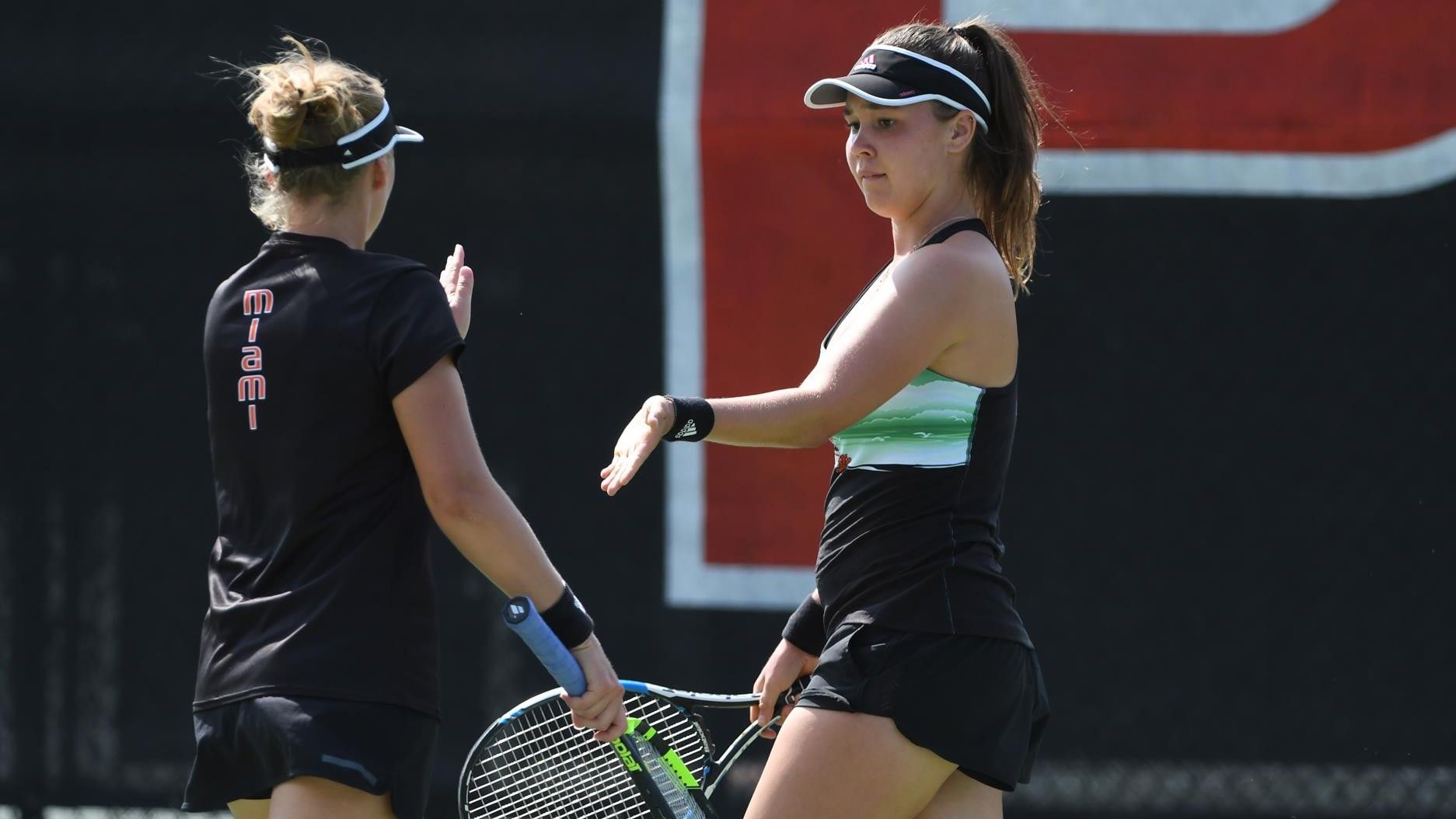 WINSTON-SALEM, N.C. – Playing its third straight conference road match against a top-25 foe, the University of Miami women’s tennis team found itself in a 3-0 hole Saturday afternoon at No. 19 Wake Forest.

However, No. 23 Miami (10-6, 6-3 ACC) won the last four matches, including the final two in third sets, to storm back for a 4-3 triumph at the Wake Forest Tennis Complex.

Since the NCAA went to a best-of-seven point format in 2001—one year before Paige Yaroshuk-Tews’ first as head coach—this is the first time Miami has won after a rare occurrence in which it dropped the first three points.

“It’s always nice to come up with an ACC victory on the road,” Yaroshuk-Tews said. “We took down a tough Wake team today, but we definitely need to get home and work on things moving forward.”

The Hurricanes got the early edge in doubles behind the play of sophomore Dominika Paterova and freshman Ulyana Shirokova, who defeated Courtney Meredith and Joanna Zalewski, 6-2.

Wake Forest (15-7, 4-5 ACC) evened the doubles tally behind a 6-2 victory by No. 31 Chandler Carter and Emma Davis over sophomore Estela Perez-Somarriba and junior Daniella Roldan.

A minute later, the Demon Deacons clinched the opening point, as Mary Caroline Meredith and Eliza Omirou posted a 6-2 win over senior Sinead Lohan and junior Ana Madcur, ranked No. 50.

Needing a win in all four remaining matches, Miami was up a set in each. Shirokova held a 4-1 second-set edge and Paterova had a 4-2 advantage, while both Perez-Somarriba and Lohan faced 2-3 deficits.

Paterova recorded the Hurricanes’ first point of the afternoon by notching a 6-3, 6-3 triumph over Zalewski, taking 11 of the final 14 games after dropping three of the first four.

Eighth-ranked Perez-Somarriba added another point by defeating No. 32 Davis, 6-3, 6-3, taking the last five games of the match. The win moved her to 17-1 on the spring, including 8-1 versus top-80 players and 6-0 against top-35 opponents.

All focus turned to court four, where Shirokova held a 3-2 lead on Ulyashchenko, winning three straight games after dropping seven in a row. After Ulyashchenko tied the match at three and again at four, Shirokova faced a 15-40 deficit in the ninth game, but won three points in a row to go in front, 5-4.

The Ufa, Russia, native then broke Ulyashchenko’s serve for the first time since it was 1-2, sealing the victory on a double fault. Shirokova took seven of the final eight points to earn the 6-4, 4-6, 6-4 triumph.

For the Hurricanes, the win was their third of the year over a top-20 opponent, all in the last 23 days, with each away from home against an ACC opponent. Miami is now 20-1 all-time against Wake Forest, including 9-0 on the road, and has won 16 consecutive matchups.

With Saturday’s victory, the Hurricanes have now reached double-digit wins in 44 of their 46 all-time seasons, including each of the past 24.

Up next, the Hurricanes begin a three-match homestand by hosting No. 50 Boston College Friday at noon at the Neil Schiff Tennis Center.